Its a while since last talking.  Spring is here with the spring bulbs almost finished flowering, the trees are leafing up in many shades of luscious green and most days there is some rain but its warm. 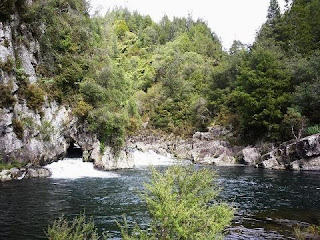 Recently we decided to make the most of a sunny day and took a thermos and picnic lunch and walked a track in the Karangahake Gorge starting at Dickey's Flat.  A lot of time was spent watching Pete watching the river through his camera - I said next time I'd pack my knitting.  Very peaceful and the birds (which aren't plentiful at all) were brilliant in their spring plummage.
Blankets galore.  Red Pohutukawa were on the loom in the last post.  One has gone to its new home and the other is to be shown in a joint exhibition called "Endangered" at Inspirit gallery in November.  The darker blue one in the foreground went to the gallery on Thursday and was sold by Monday (called Karapiro Lake).  These were all an exercise in emptying cones but as a gap appeared on the shelf it was filled with a cone of yarn from the floor.  These three all had angora (from rabbit) weft giving a slight haze and very soft.  The fourth lighter blue has a mohair (from angora goat) weft and has been put aside for another exhibition in November - Oarsome Waipa to be held in Te Awamutu. 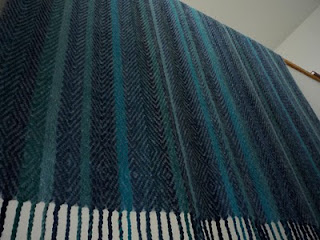 After the Low Tide exhibition at Inspirit I was asked to be guest exhibitor at Creative Fibre Experience which has just taken place this last weekend in Hamilton in association with the Craft and Quilt Show.  Not so much craft on show, most stalls were geared towards quilting.  When I found out how much a stall cost my idea of taking one next year went out the window fast.  The whole show now travels to Christchurch.  The CFE exhibition was great to see and very well displayed by Shona Schofield.  Well worth a visit to see it.  I was proud of my little corner among some elite company. 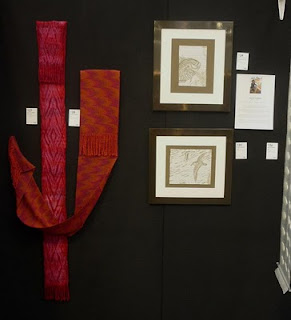 Two scarves, one shibori, one echo weave and two works done in Theo Moorman and then machine embroidered over.  You can just see the edge of a monofilament hanging with angel wing shells. 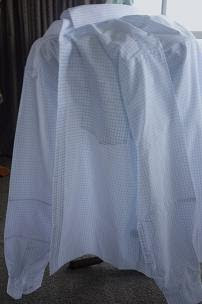 Finally persuaded Pete to buy some new shirts.  I learnt that if we get three the same I can use one to add length to the sleeves and body.  You might see in the bottom left the two flat fell seams where about 4" have been added in.  This works well as he usually wears a jumper or rolls the sleeves up.
And thats about it.  I've done more samples for the Poutama Stairway to Heaven blankets and hopefully will get the next brief on colourways today.
Posted by Dianne at 8:02 AM No comments: