This was the view from our deck on (I think) Easter Sunday.
Double rainbows.
Easter weekend started very wet and windy with the remains of cyclone Ida.  We battened down the hatches and sat it out but sympathy to those who got wetter than they would have liked. 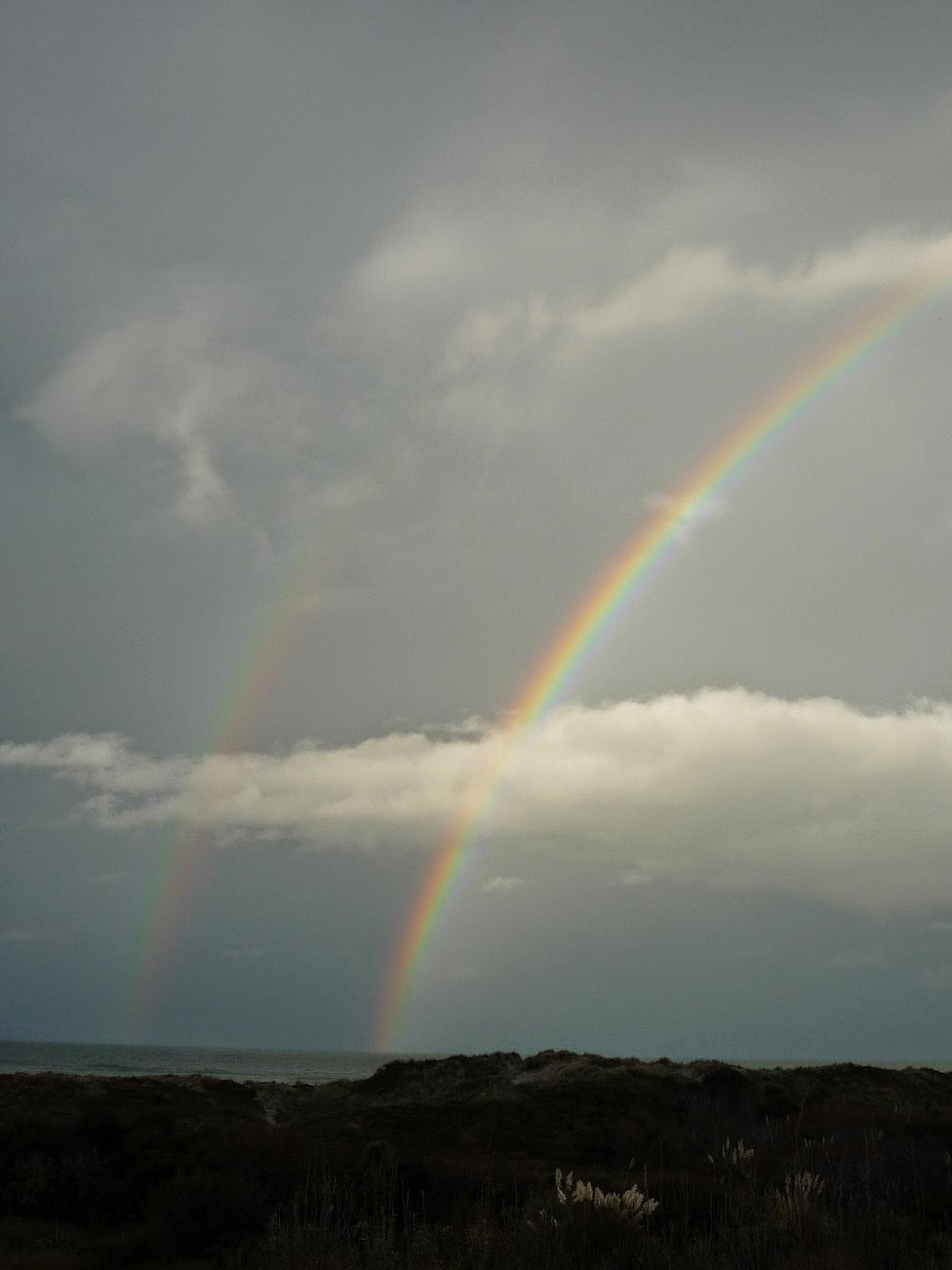 Since then life has been busy with visitors and more vistors and some visiting and so it goes.

There has been some weaving but mostly finishing off of work.
Four blankets have been delivered to Pauanesia
and two more are having their fringes tasseled. 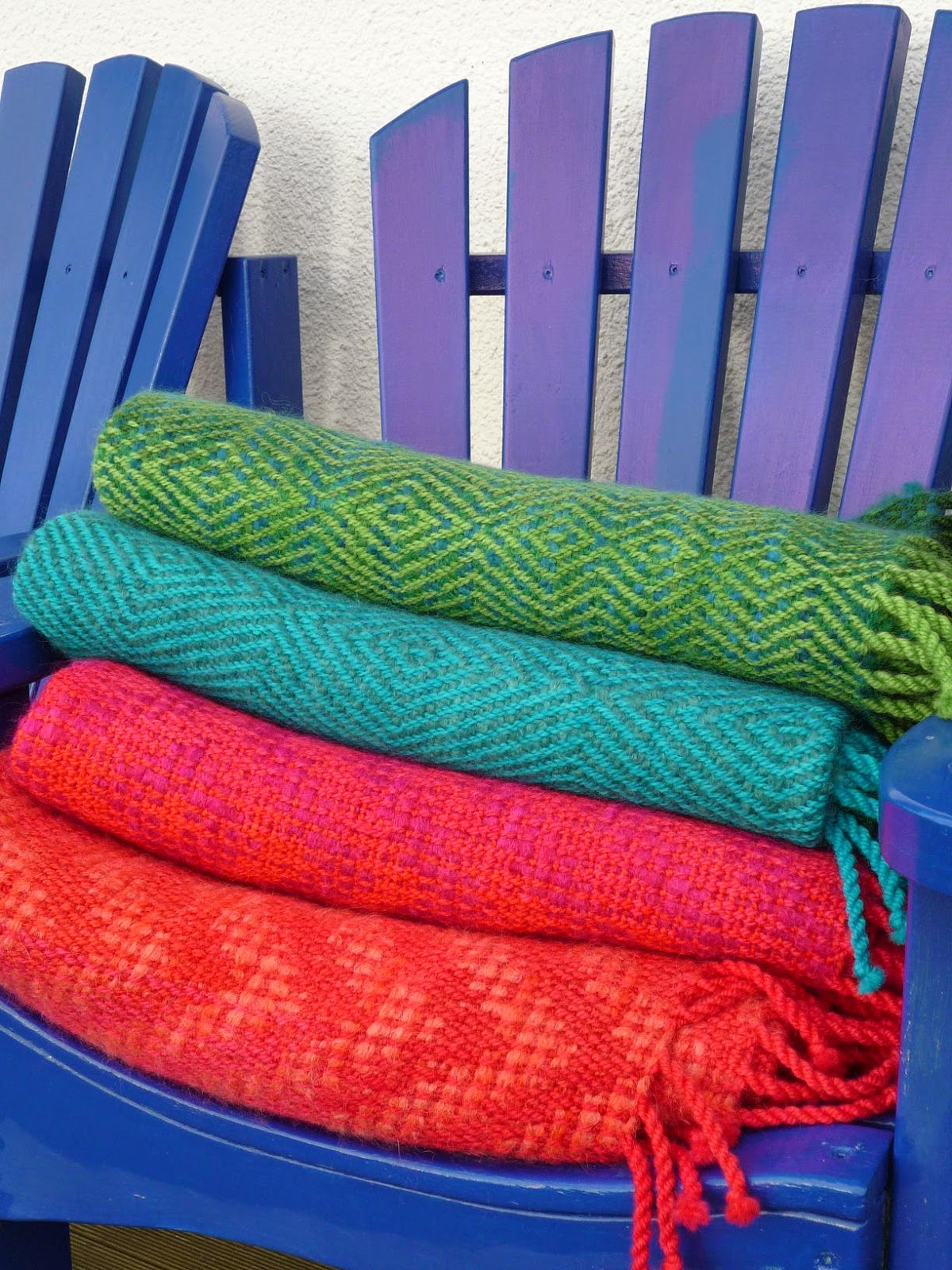 In a post back in April I mentioned making a list of projects waiting for their debut.
Well the list grew to 34 projects and is now down to 24.
I'm working through them and its great to cross things off.
At this stage some are nearly done but no cheating allowed.

I was reluctant to write a post as I'm back to working on my slooooow girty.  Yes the hand-me-down computer from Peter died.  The fan stopped, over heating the power supply and when Pete tried to jemmy it up, temporarily, sparks flew.  (His career was in electronics.)
We are waiting for a cheap power supply purchased from Trade Me (the NZ equivalent of Ebay) just to see what's what.  Is there more damage to the computer than we know?  Is it worth fixing or is a new one called for?
Thank goodness I'd finished the last blanket on the loom.

Now I'm going to turn girty off to start up the dobby loom.  I just know its going to take 20 minutes to get going again.
And if I get the "unresponsive" message I just might take it up on the "kill me" option!
Posted by Dianne at 5:01 PM No comments:

Not a bad place for a work station after what seems like a week of rain.
Winding mohair into balls ready for blanket wefts.
Note the twill pattern on the chair. 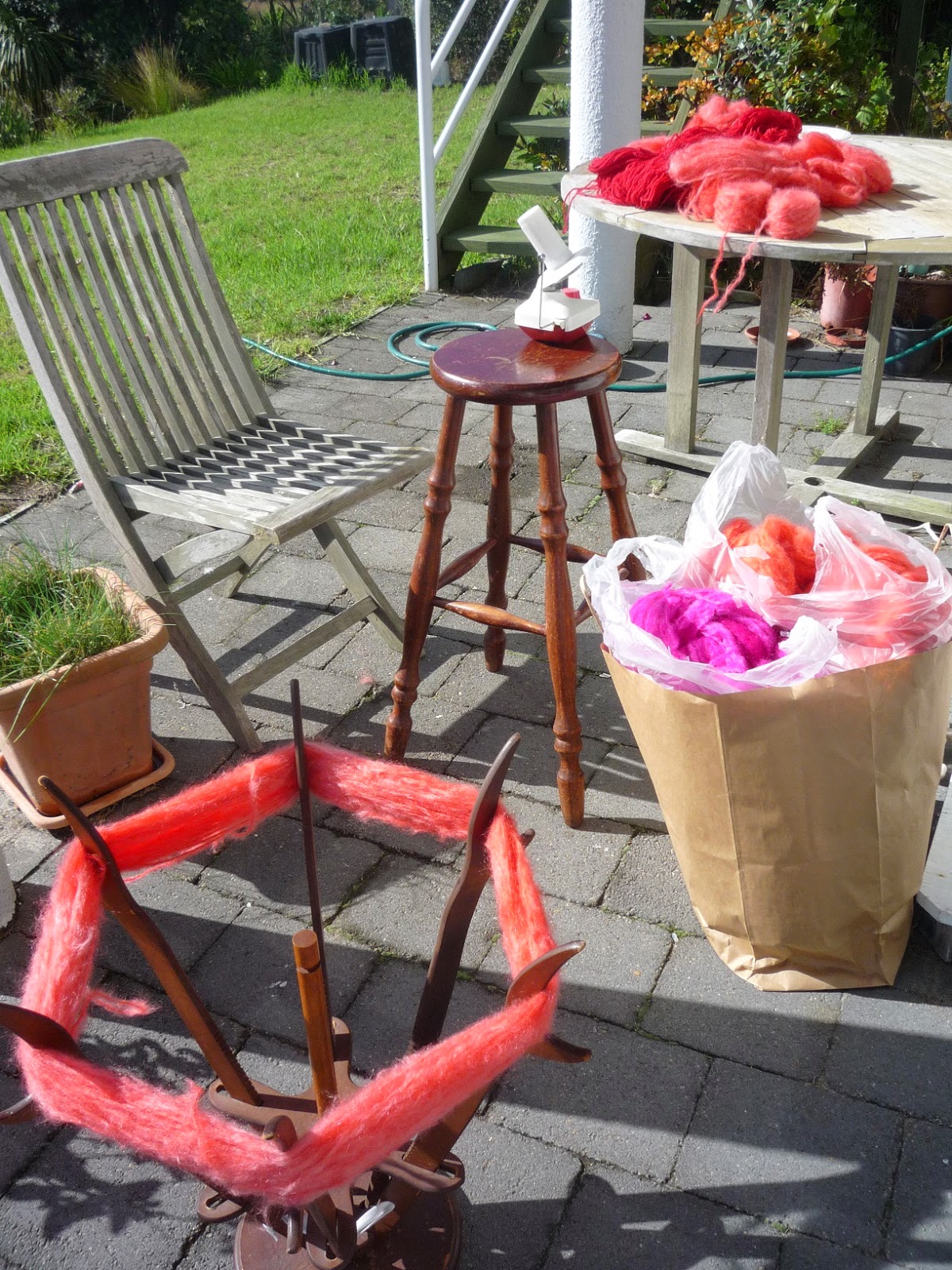 Visit and then Workshop with Stacey Harvey-Brown

Just before travelling to Auckland for the workshop "Dimensional Weaving" with Stacey Harvey-Brown  I had a visit from a fellow blogger and weaver, Lynette, and her husband Michael, of Dust Bunnies Under My Loom  who were travelling in NZ.   As the day approached for the visit I was wondering Oh what if this is a mistake but I needn't have worried (apart from the very untidy state of the studio).  When weavers get together what do they do - talk and show and tell and study equipment.  About three hours zipped by and I realised it was too late to offer a cup of refreshment as they had to be on their way.  That is just not the kiwi way!  It was a very enjoyable afternoon Lynette and hope the rest of your holiday went well.

Then the brain did a somersault and focused on the upcoming workshop with Stacey Harvey-Brown, Dimensional Weaving.  As you can see from the photos there is lots of texture.


Lots of ideas there to mull over.
Stacey is writing a book about this so keep an eye out for it.
Posted by Dianne at 3:12 PM 1 comment: 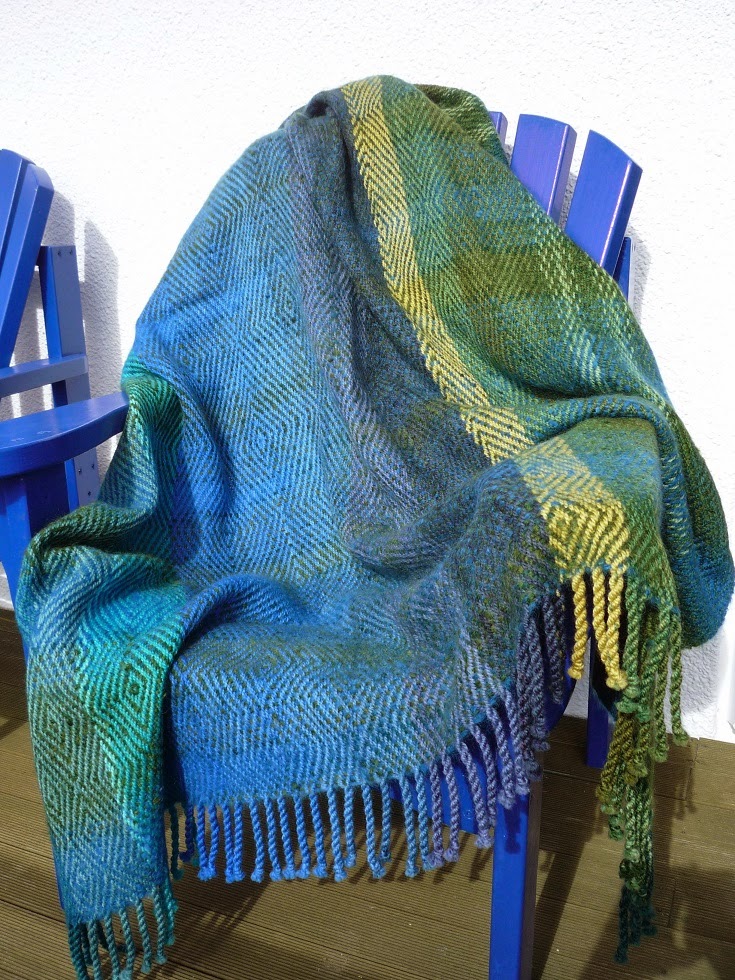 This one will be in Inspirit Gallery next week. 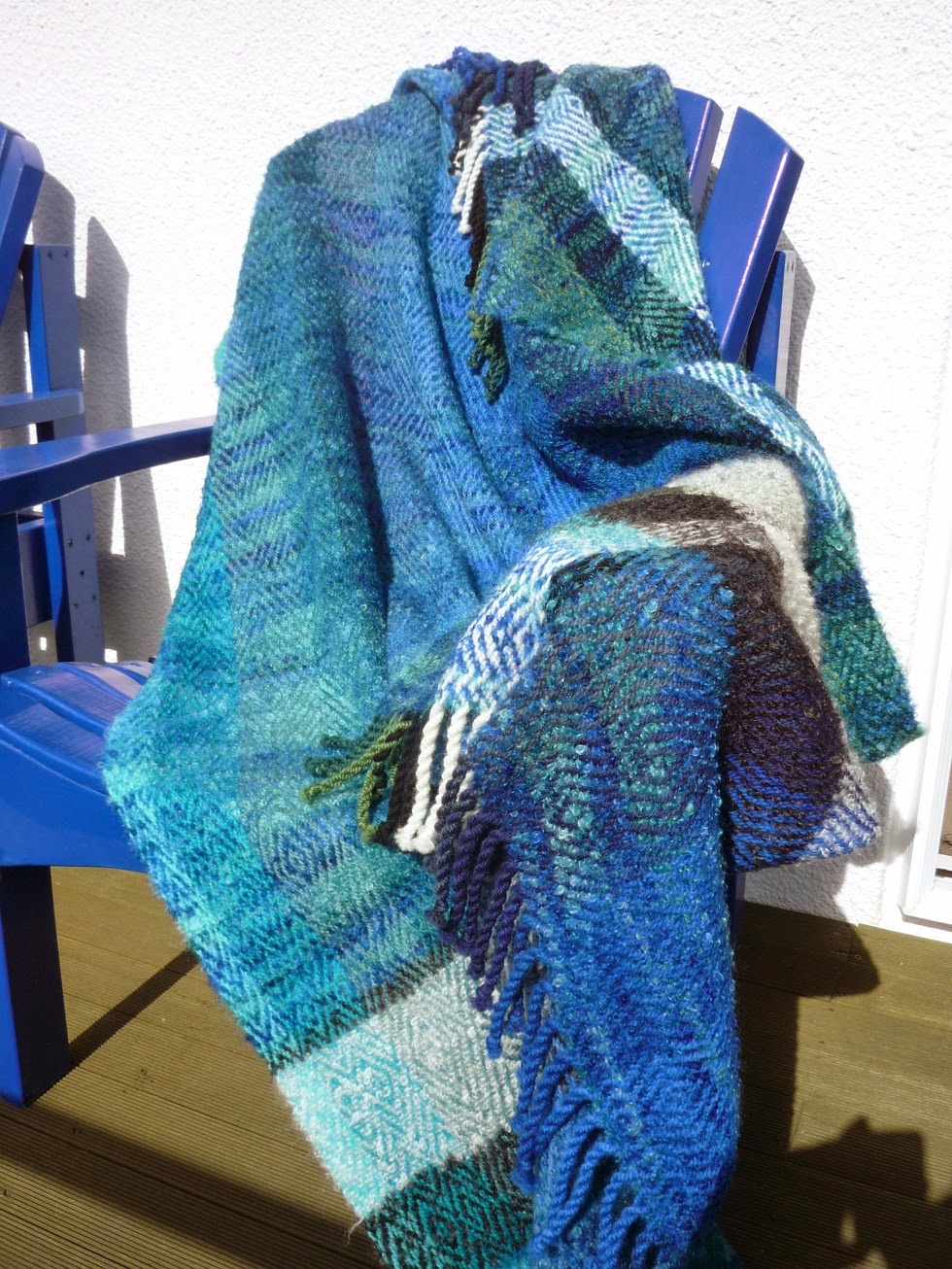 Tui blankets have gone to a good home. 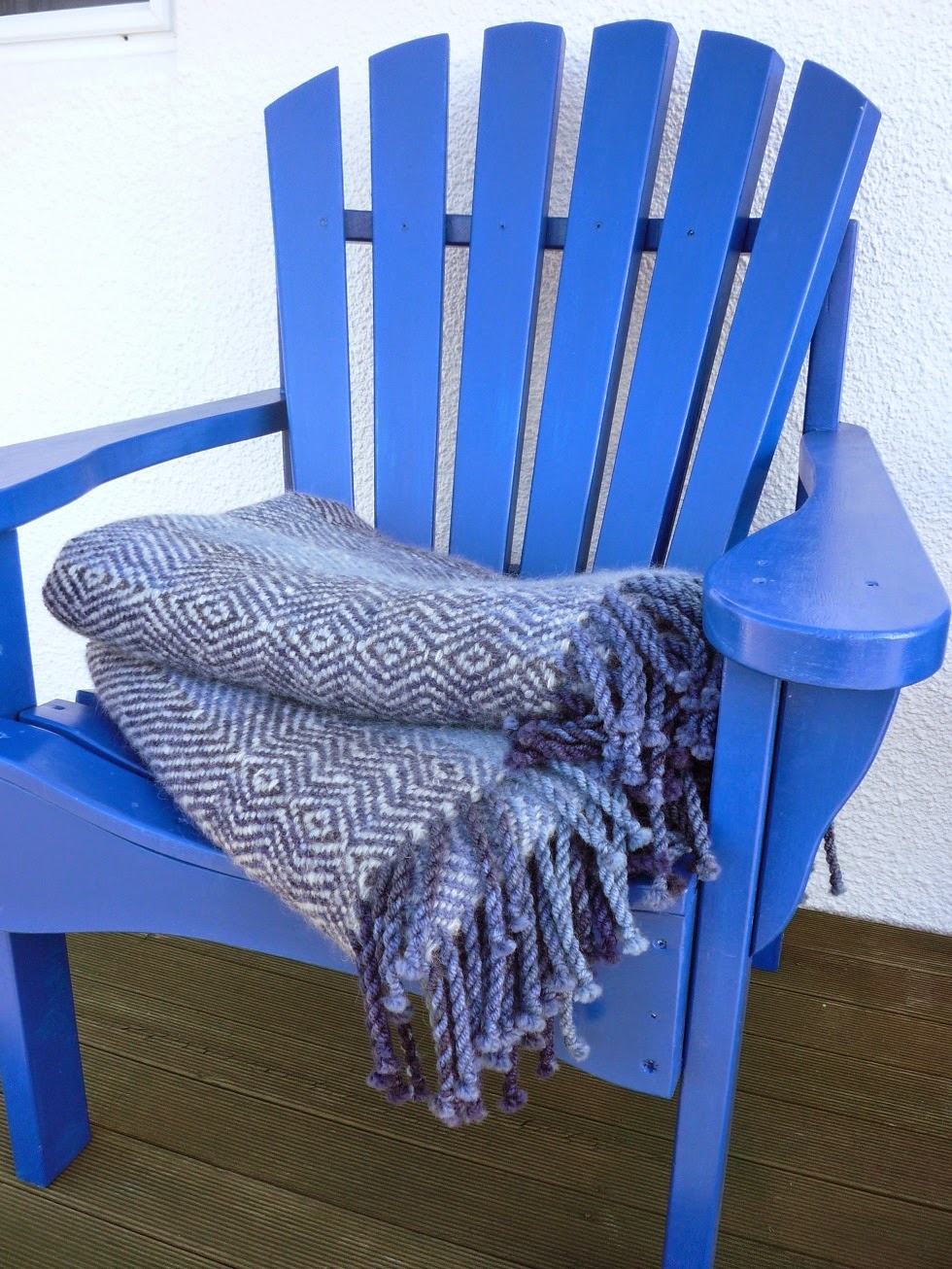 Indigo blue blankets are waiting for a loving home at Pauanesia. 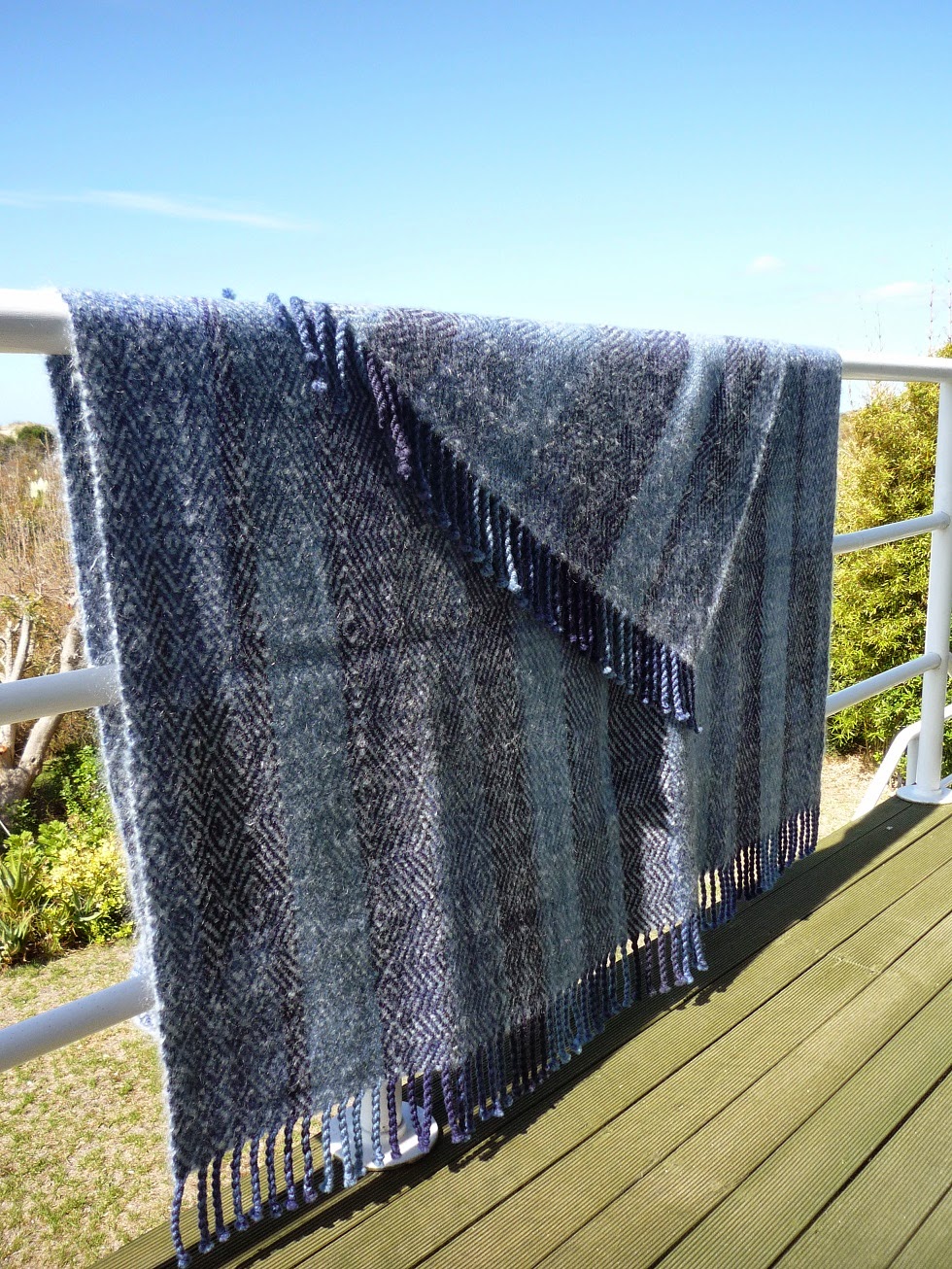 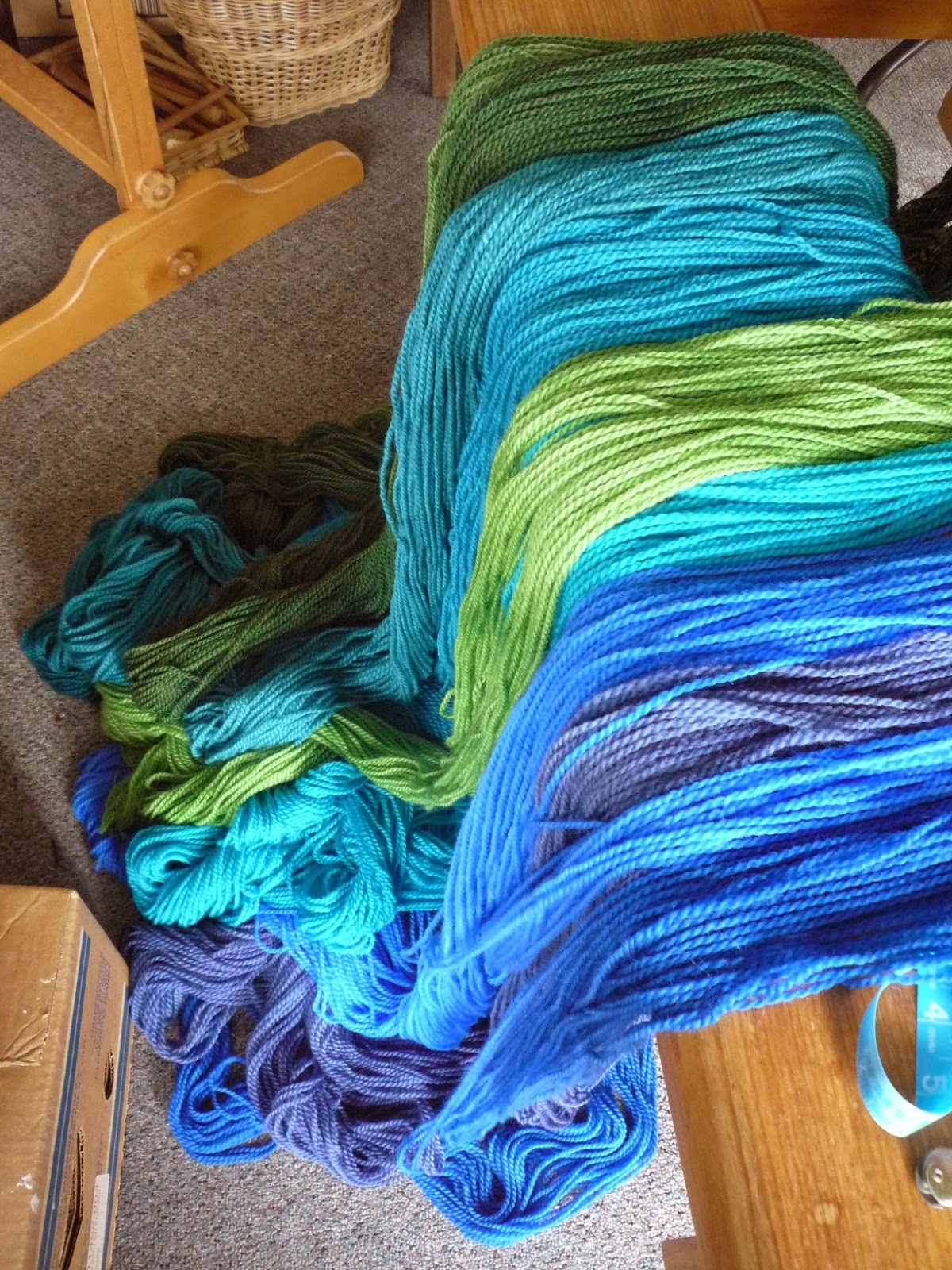 Next up more blues and greens and then 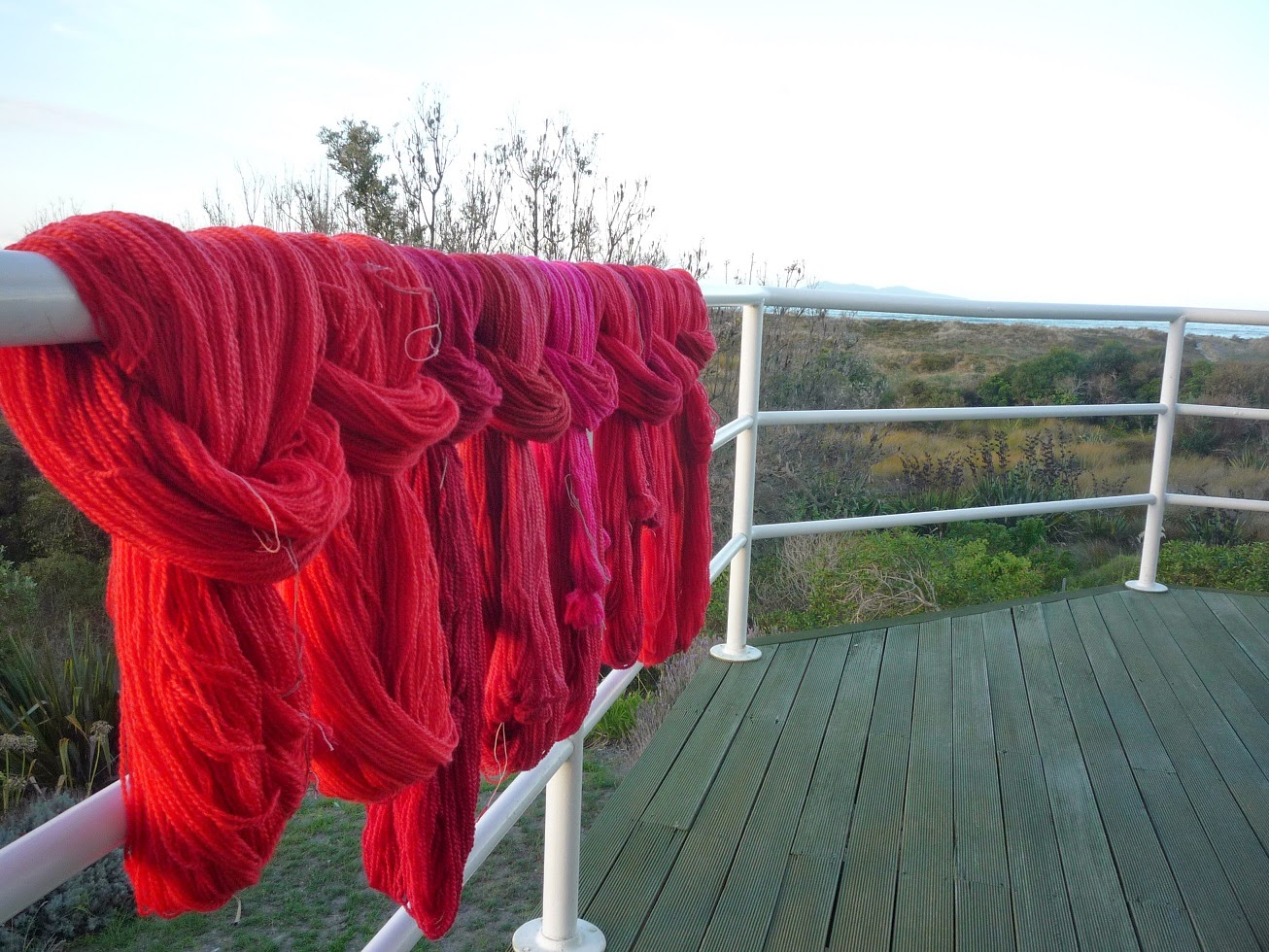 I have spent the last week with my head in the dye bath.  I've reached the age where I can't switch back and forth so easily so decided to prepare the yarn for the last run of blue blankets before settling in to red shades.  Its 8.30pm and the last batch of mohair weft is cooling in the pot.  Tomorrow its tie on and weave.

Earlier today I made a list of all the projects I have started, on order, have to do or would like to do, such as work for exhibitions.  I think I'm up to 28 projects.  I stopped counting because I was so horrified.
Posted by Dianne at 8:36 PM No comments:

I hope the above link takes you to a picture of a lovely lady snuggling in one of my blankets.  (Guess what I've been weaving lately.)  Look for 2 April 2014 on timeline.
Posted by Dianne at 7:58 PM 2 comments: