Well, I went back to the cashmere scarf, threw the shuttle twice and broke two warp threads so out came the scissors and its gone.  Tied on some black merino in 110/2 TEX and have woven a scarf 2.2 metres long with not a problem.
Last post I also mentioned keeping knitting records.  Went to the knitting machine to repeat a project I'd made about 4 years ago, found the page in my work book with a few bits of information like tension, stitches and rows per inch but did I keep a record of colours - no - did I keep a record of the actual stitch pattern - no.  Nothing like making work for myself.
Have had a muddly week dyeing yarn for this, working on patterns for that, deciding which sample is best for this.  Now I have guests coming to stay so will have to return all the overflow from the studio back to its home and squeeze it in.  Enjoy your week.
Posted by Dianne at 8:48 AM No comments:

Its been a while

It seems I'm still being plagued by the virus bug from Christmas time.  Appears it has probably left a residue in the middle ear causing what amounts to sea sickness (this has a name which I can't spell).  So no fun sitting at the loom or washing dishes, cleaning oven, etc. 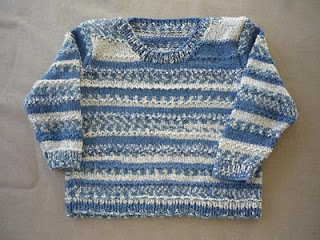 Finally finished this little number with envelop neck in bamboo 4 ply.  The way the little chap is growing it will be too short soon so when I saw a ball of the same yarn in a "throw out" bin for $1.50 instead of $10 I grabbed it.  Figure I can take the rib off the bottom and knit downwards. 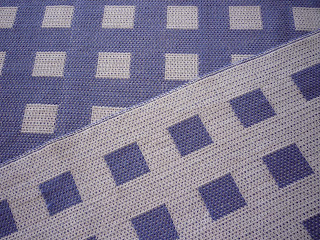 This next might be a bit heavy for delicate ears!  When I finished the Poutama blankets I thought it would be
good to use the same threading for a new set of placemats for myself.  I raised all the odd numbered shafts using a tabby shed and slipped the lower layer out of the reed.  Then I put in two rows of tabby behind the reed and resleyed to the correct threads per inch, the tabby making it easy to find the correct threads.  With two rows of tabby inserted in front of the reed I then tied on the white cotton warp and pulled it through the reed and heddles.  I then went to the back of the loom and cut off the old warp, knotted groups of new warp ends and tied to the back apron.  Roll the warp onto back beam, tie to front apron and ready to go - when new dobby chains are made.  Six mats and one long runner later I did the same thing again to reduce the tpi for a scarf.  Met my waterloo this time though.  I used a 74/2 (48 wraps per inch) cashmere for the warp but after weaving 50 cm the threads started breaking.  I pushed ahead for another 50 cm but oh dear, an awful lot of broken threads.  Do I keep going for another 50 cm and a short scarf or cut it off and run? 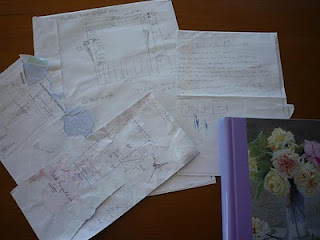 I have read recently on a couple of blogs about keeping knitting journals or records of projects.  I keep a weaving work book and could pretty much repeat anything I've ever made but with knitting projects I've always delved into the waste bin and grabbed an old envelop - very elegant as you see above.  I had this rosey journal on the shelf for many years so thought I'd put it to use.  How long will this last? 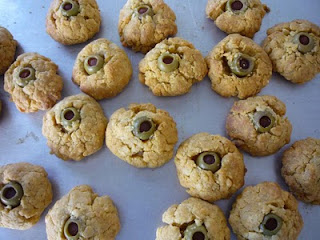 My "baby" celebrated her 30th recently with a Zombie themed party so we had to join the fun in Auckland.  I contributed eyeball biscuits with a stuffed olive placed into biscuit flavoured with paprika and tasty cheese.  Also made fingers with baby carrots with the end slivered off and used a dot of cream cheese to attach an almond sliver then carved a couple of lines for knuckles.  After bbq and salad Rind served cup cakes that looked like brains. 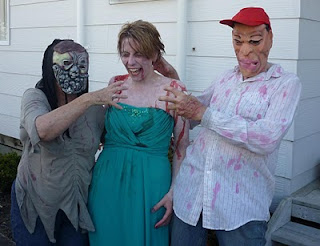 Proud parents! click to embigen.
Posted by Dianne at 9:58 AM 2 comments: