Another set of blankets for Pauanesia looking for a new home. 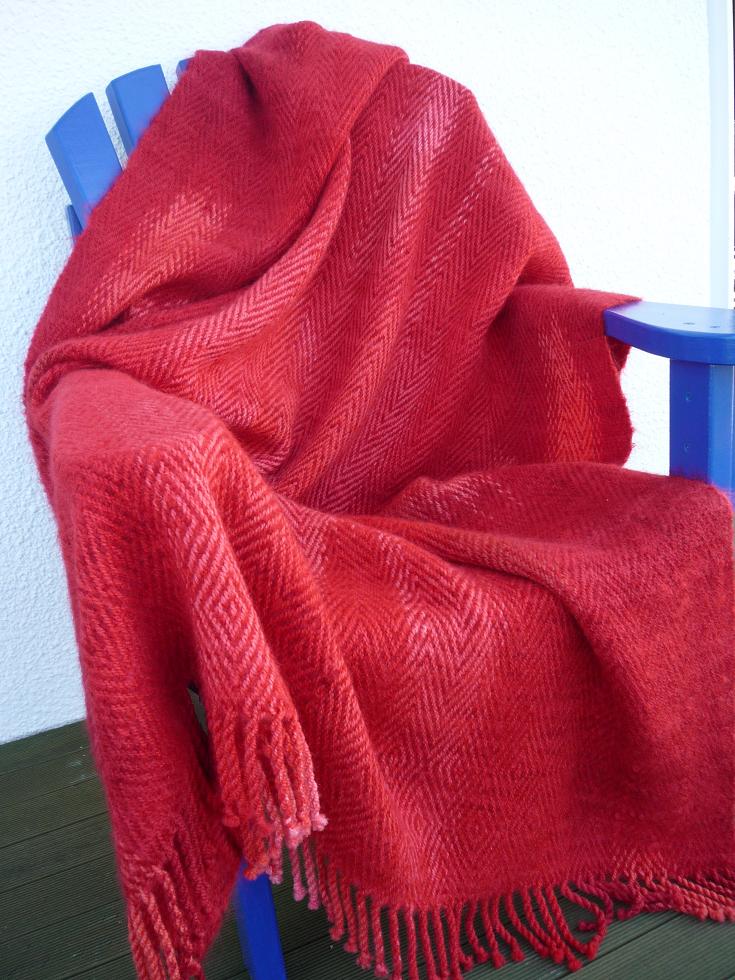 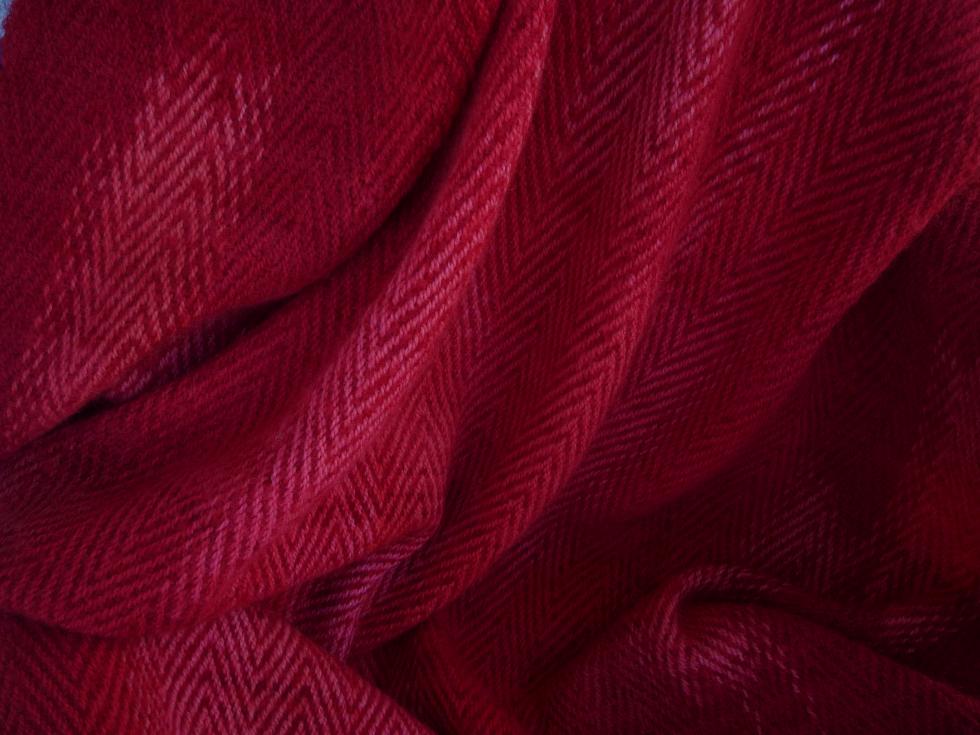 A few awful shots of beautiful wedding wraps taken in a hurry as I had to get them parcelled up to catch the post. 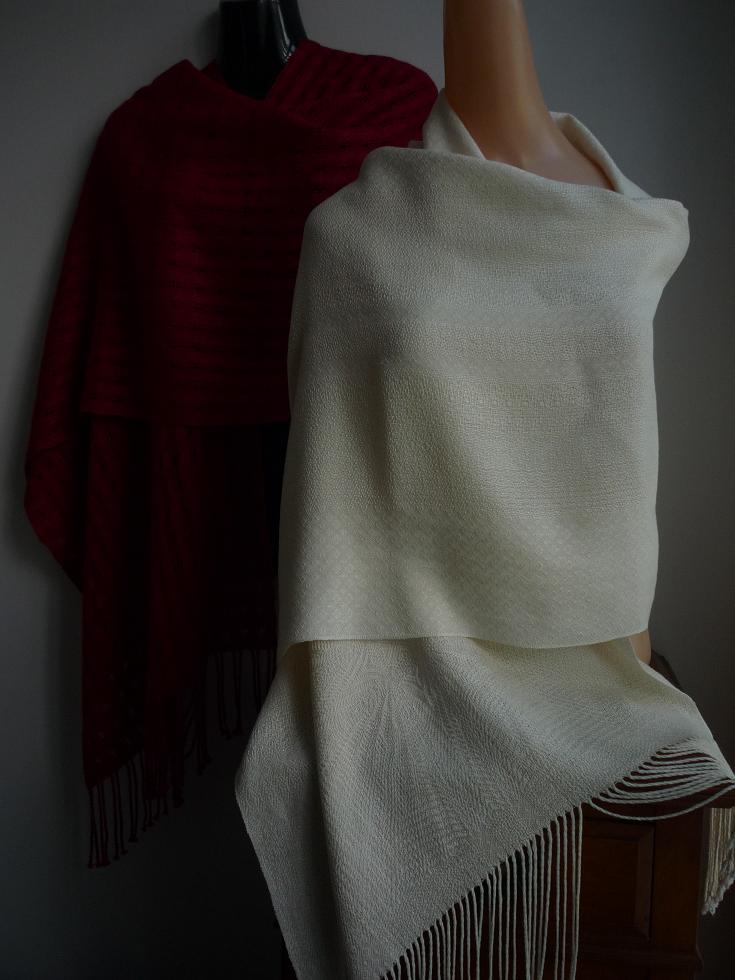 To set the scene the bride and all three bridesmaids, including my daughter,  were at high school together.  The bride and partner have been working in Britain for many years.  Bride was proposed to while holidaying at a vineyard in Tuscany.  The wedding will be in Ohaupo.  New Zealanders will appreciate the irony of this. 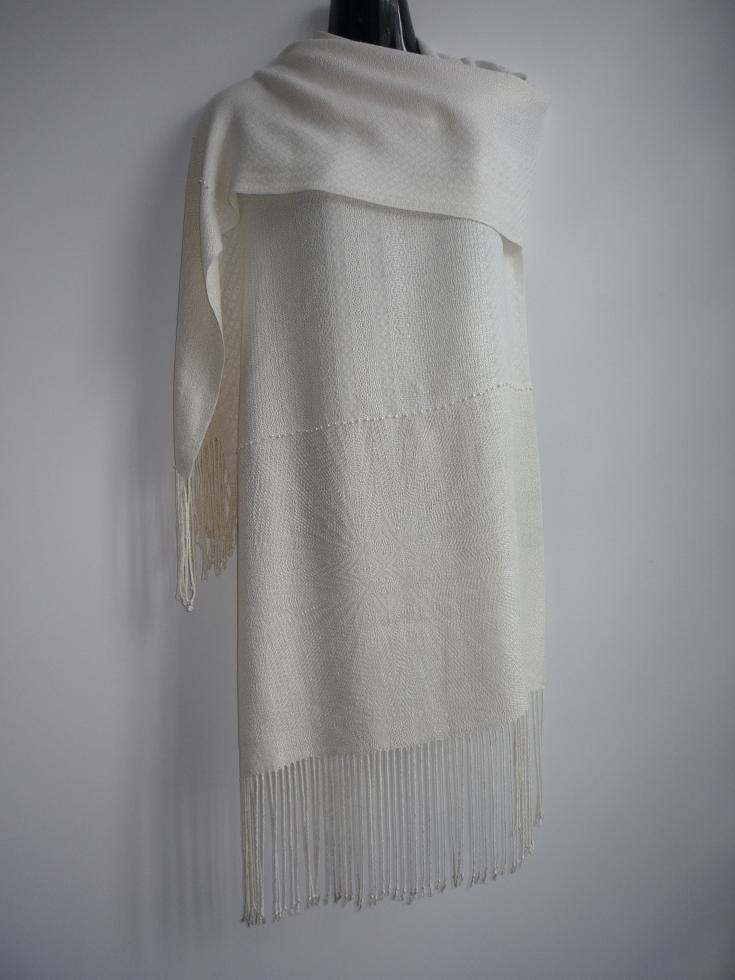 Warp:  bamboo 10/2
Weft:  silk Schappe-Seide Nm120/2
Snowflake twill:  Starburst
I couldn't get enough of one dye lot of silk (and as time was pressing) I thought I could change lots where the pattern changed (enlarge the photo) but no, one was a lot creamier and it showed when woven.  Hoping to divert the eye I stitched pearls on both sides of the break and at each end.  Knowledge after the event is wonderful and I would have been better to weave with two shuttles and alternate threads. 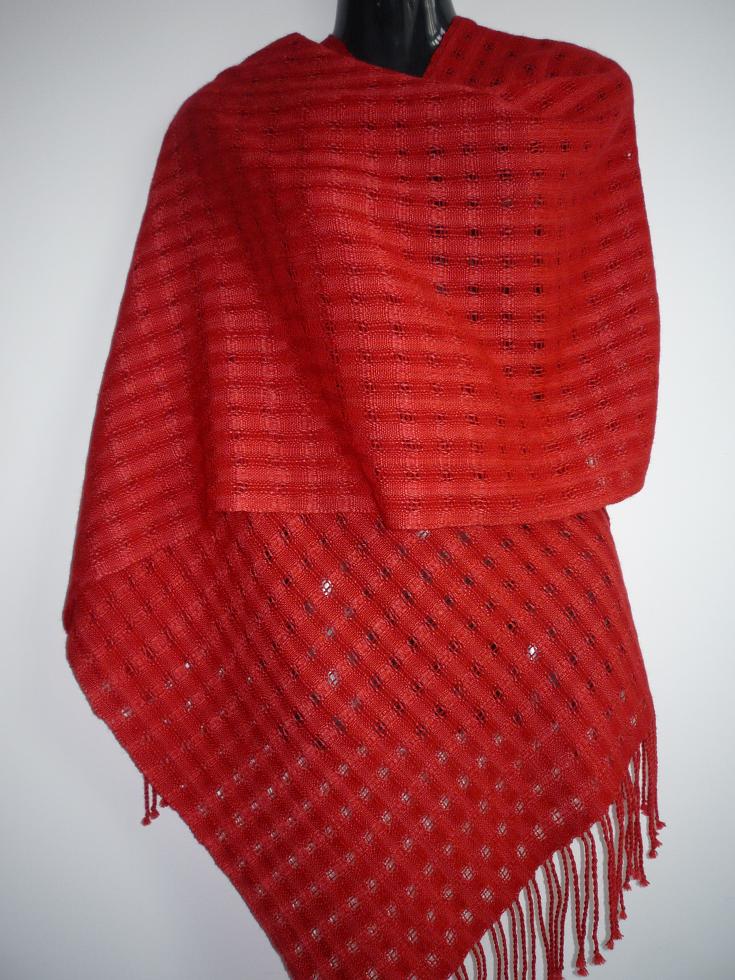 Then to the warp from ....*#&@*.  On my shelf I had two cones of white Zephyr merino/silk 50/50.  I would look at it and think "one day you'll be something special".  Of course the air got to it before I did and the outside of the cones became very discoloured.  But I could dye it a deep red (not orangey like the photo) for this project.  All was well until I tried rolling the warp on the loom.  Little fibres caught and pulled the thread through neighbouring reed slots and heddle eyes.  10.5 metres and every 20 cm I'd stop and sort meaning it took forever but looked wonderful when tied on ready to weave.  It didn't take long before sticky threads started doing their thing.  There was a lot of frogging.  I tried hairspray, I tried wax, I thought about fabulon ironing spray but it said not on silk.  It seemed to help to run the weft through a block of wax as I wound the bobbin.  I got there in the end and they look and feel great.  Weft is 100% NZ merino 110/2 hand dyed.

This is the third wedding I've made wraps for and it usually turns out very hot and they aren't needed.  Even though its pouring with rain and blowing a gale at this moment I'm hoping it'll be the same this time.
Posted by Dianne at 10:07 AM 2 comments:

When you get to the end of your piece of weaving what do you do with your end.  Here is one suggestion. 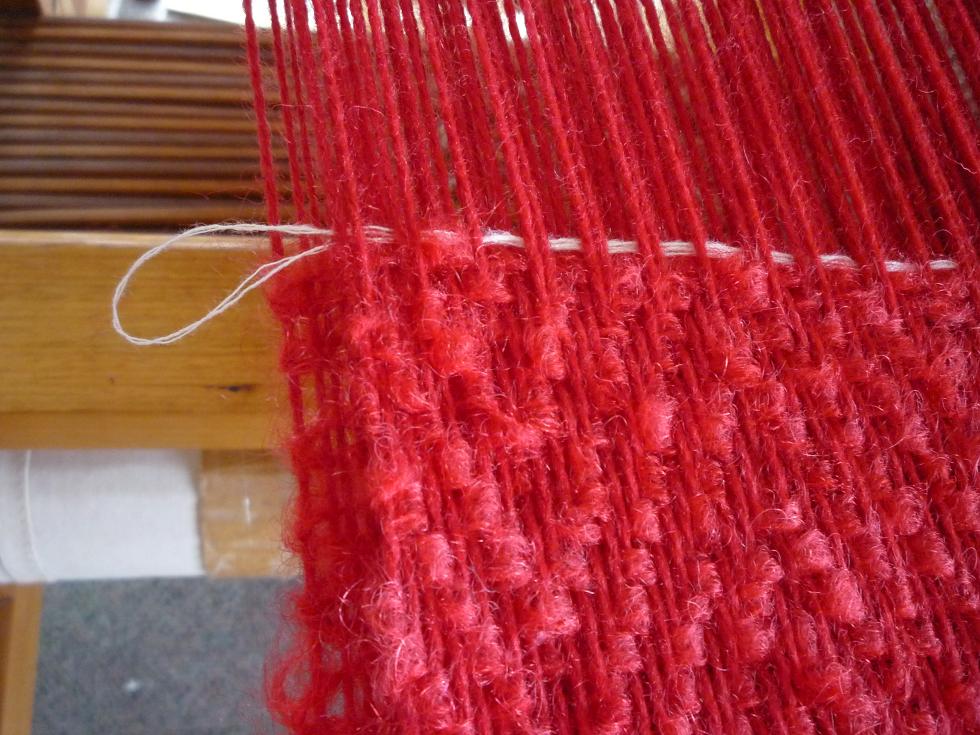 On the second to last pic, on the side where the last pic will exit, place a loop of  thread in the shed for about 2 - 4 inches (5 - 10 cm) with the cut ends sticking up from the cloth. 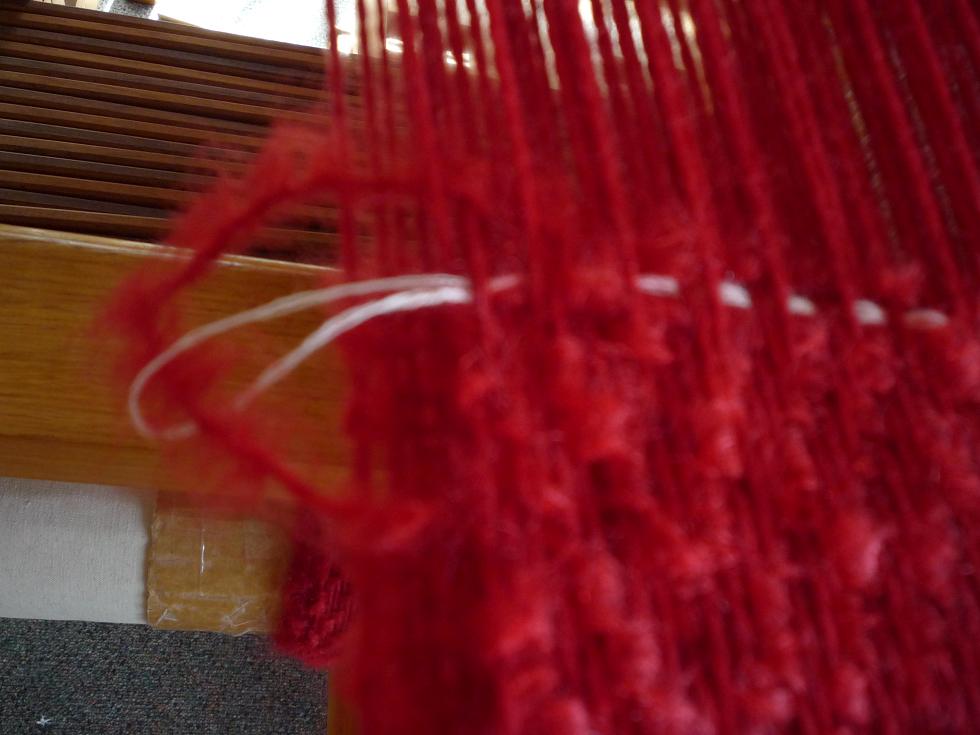 After weaving the last pic insert the cut end of weft into the loop at the selvedge and carefully pull it back into the body of the cloth pulling from the cut ends.  (Sometimes you have to fudge if both the weft and loop exit on top or bottom of  the warp thread.) 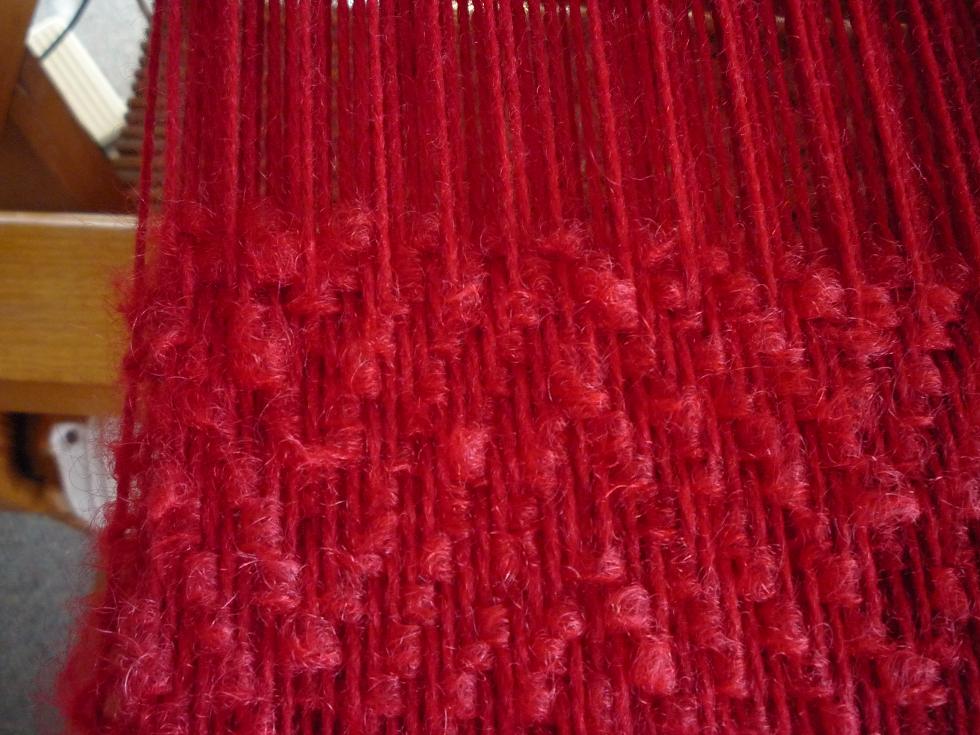 Just like magic the weft end is gone.
Posted by Dianne at 11:33 AM No comments:

Professional Weavers Network of New Zealand has gone live with a new up dated web site and under Exhibitions we find Japonisme.
Posted by Dianne at 8:57 PM No comments:

Just back from Melbourne

I think I now know why I'm constantly under pressure.  It's self inflicted.  If I stayed home more often I could work properly.

Some time ago a friend asked if we'd like to go to his daughter's wedding in Melbourne.  Why not and a chance to hang out in our favourite city so that's where I've been.  Had a wonderful time and came home needing a rest.

The first day we trained to Williamstown to see the Sea Shepherd boats just back from their anti-whaling adventures in the southern ocean, sporting a few scars but a job well done.  One day we took the train to Castlemaine for their arts festival.  We spent some time in the Melbourne Art Gallery and I caught a Dior Yamamoto exhibition and, of course, the wedding was great.
Before leaving for Melbourne I worked flat out and both looms were warped with hand dyed yarn thinking I'd be right in to the weaving on return.  Yeah right!  A flu shot put paid to two days; I just slept.  At this point I can report two of three bridesmaid wraps are woven and one blanket is rolled on the cloth beam.

As you can see I'm working with a lot of red at present.  Every inch of the studio seems to be shouting red, pick me, me next!

Posted by Dianne at 1:52 PM No comments: