What have I been doing?

What have I been doing?  Probably not what I should be.  Lets see, knitting.  I started knitting this jacket 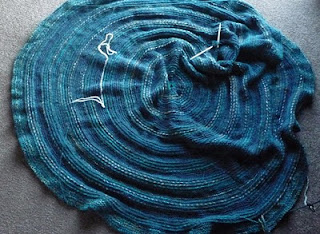 (Vogue pattern) last winter but had to put it aside through the summer as it was just too hot to have so much fabric sitting in my lap.  Picked it up again in the autumn and finished the body but now I find the armhole slits are in the wrong place.  I could graft the slits shut and open for armhole in the middle of the garter stitch band but I just am not interested.  Have gone right off the garment!  Its in the frog pile. 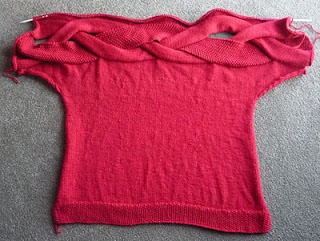 So started knitting this jersy loosely based on a pattern from Rowan magazine.  What's with those plaits?  They'll have to be stitched at the least.  Gone off that too.

So now I'm knitting a jacket for baby Reggie, due in December from bamboo yarn, size 3-6 months with length for the next size up.  I'm enjoying this and it does seem to be proceeding OK.  What are the best seams to use on babywear, anyone?

Weavingwise, I've done about 200 samples [well 8] (a miracle for me) to work out a pattern in Summer and Winter in two layers, joined at one side, with the pattern following through correctly on the reverse side.  This is an order from Pauanesia and the colourways will be chosen by them.  I used scrap yarn for the samples.  Also the more astute will see its not true S & W as I have put alternate thick and thin wool threads in the warp to reduce bulk and the weft is all mohair as I didn't want to use two shuttles with two layers - that would have been too much.  This sample was made to get the fold correct so I threaded the least needed to test.  The bands will be wider and the vertical and horizontal areas equal in the project.  You'll have to put your head on the side, the fold is down the centre. 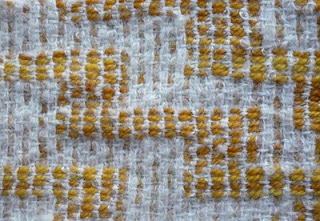 The shock of so much sampling, and the thought that my dobby loom will be tied up with the above project for some time I quickly designed and put on a warp for three shibori scarves and am weaving my way through them at present.  Will pull up and dye at a later date. 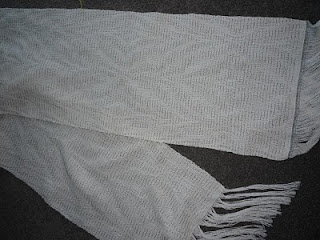 See the diamond and "X" shapes that will hopefully offset by the dye process.

While putting the photos on here I've taken a second look at the knitting and maybe it is worth persevering.  Rather than frog the jacket it could be a blanket!
Posted by Dianne at 5:42 PM 1 comment:

The Opotiki Fibre and Fleece show has been running alternate years for more than 20 years and I've never managed to get to see it until this year. On Saturday a friend and I drove to Opotiki (2 1/2 hours from my place), a pretty drive along the Bay of Plenty coast.

We did a little retail therapy. 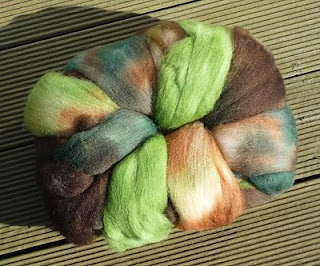 Merino sliver (100gm) from Awakeri Woolcraft.  It looks a bit washed out on this screen, the brown is a rich chocolate and the greens brighter.  Apparently it is becoming very difficult to get merino sliver here as manufacturing is being sent off shore to China.

The exhibition was amazingly well set out with lots of space for every creation.  Most 2 metre tables had just one or two pieces on them allowing you to really appreciate the work.

After lunch we set off for the Theatre where the fashion parade was being held. 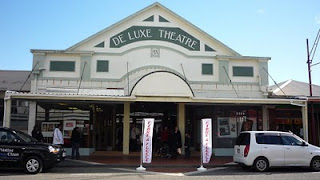 I was really taken with the old buildings in this town (old by New Zealand standards), many of them dated 1912, 1914 and this 1926.  Many of our early buildings were built in timber, often kauri, and have not survived. 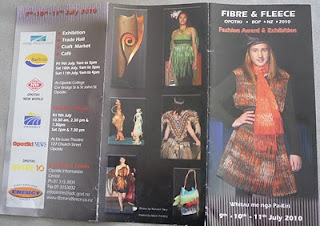 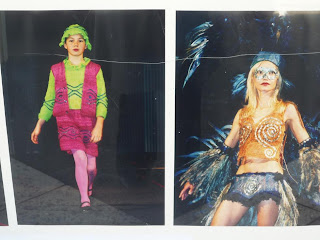 Images from previous years fashion parades taken through a window, we weren't allowed to take photos on the day. 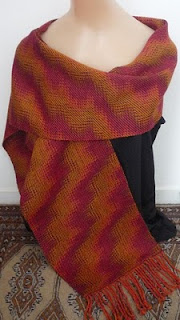 Had an enjoyable evening at the Low Tide exhibition opening on Saturday, 3 - 5 pm.  After the speeches that is.  Not my favourite activity and especially when dosed up on antibiotics for infected sinuses.  (That's right, no winter virus but pesky sinuses.)   Got to talk to lots of people and catch up with a few friends, then went into Hamilton and had tea with my daughter at a Greek restaurant.

These are a couple of the extra scarves which are in the gallery now.  I can't figure how to put captions on the photos but the one on the left is lava with a black alpaca/silk 64/2 weft and hand dyed merino warp.  The echo shows quite nicely there, more so than the scarf on the right, Fire, with same warp but deep red, almost burgundy merino weft.  What you don't get in the wool echo weave is the iridescence a reflective yarn such as silk gives. 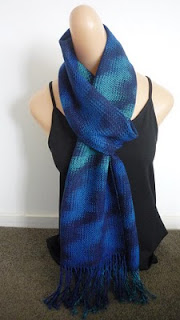 Another version, rippling water with one warp chain painted and the second plain navy.  I have now changed the dobby chain and there is another take from both these warps.  What I did was leave enough red warp for another scarf, tie the blue warp on and pull through reed and heddles to back beam,  weave the above blue scarf, repeg dobby chain, weave another blue scarf, wind the knots forward through the reed and heddles and weave another red scarf.  Is that all too much for sensitive ears.  I do this sort of thing all the time and don't have any problems so long as the knots are all even.  Pictures later.

I've been working on some samples for the next range of blankets and until I get the go ahead for them I think I'll blob out with spinning wheel and a movie.
Posted by Dianne at 3:50 PM 1 comment: