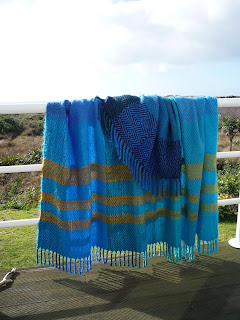 To my shame this large Kotare blanket was ordered a year ago but what with other commitments and travelling and summer (who needs mohair blankets in the heat) and knowing it would be a pig to alter the loom it just got neglected.
Sure hope it was worth the wait.
Posted by Dianne at 4:22 PM No comments: 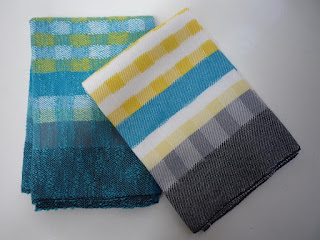 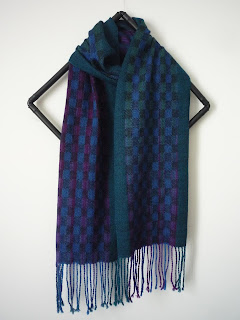 Yes, one warp gets tied to the next and I got to thinking "why can't I make this work for shibori, both warp and weft resists. 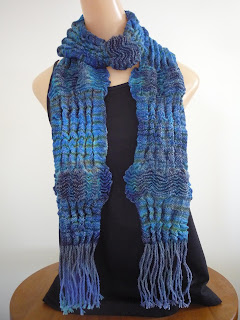 And then Rene came home with a gorgeous scarf (and she might tell us who wove it) and I thought warp and weft resist but in blocks; so much fun! 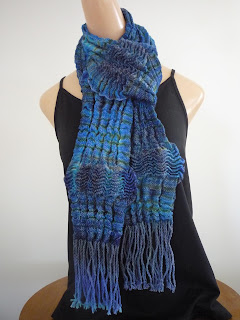 It will be on display as part of the Creative Fibre Tauranga Exhibition opening at the Tauranga Racecourse on Friday 29 July.  And when I see it there I'll be able to tell you what I called it as I can't remember.
Posted by Dianne at 3:24 PM No comments:

Some time ago, probably a long time ago, I couldn't resist buying a skein of yarn from Anna Gratton Ltd simply because of the colour. 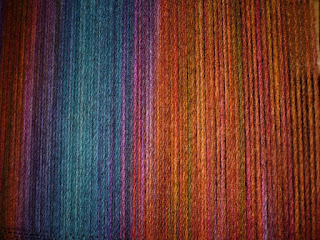 I wish I was a better photographer to be able to show all the nuances of colour but this pic of the threaded warp will give an idea.  Would love to know how Anna does it!  I manipulated the yarn in the warp to get the colours to stack and this shot below shows what resulted.

Woven warp faced to highlight the colour.
Warp threaded on a 5 end extended twill.
Weft a fine black rayon woven in a network twill which was unnecessary as it can't be seen but hey, had to turn the loom on anyway.
And the very wearable finished garment. 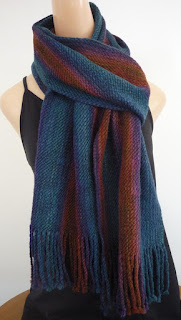 This will be on display at the Creative Fibre Tauranga Exhibition next week.
Posted by Dianne at 4:39 PM No comments:

Way back in the day when manufacturing happened in country and didn't happen off shore when I was a machine knitter before discovering weaving there was a knitwear manufacturer called Glengyle who had a sale of there surplus yarn once a year.  A lot of angora, from the rabbit that is, and I don't recall what else.

The first year I went with my son in his push chair, which makes it about 38 years ago, and was rather knocked sideways by these women on the mission of shopping for as much yarn as they could gather.  By the second year I had it sussed.  Son in care, paper clean sacs in hand and when the doors opened the game was to get as much yarn in the clean sacs as possible then go find a quiet corner and sort out what you wanted and discarded what you wouldn't use.  Oh I miss those times!

Anyway cones of this yarn have been boxed up and shifted from home to home and more has been added from sales and donations until recently I thought if I don't use it it should be dumped.  How could I dump it when it has been so loyal providing me with dreams of creation and coloured rainbows?  So ... 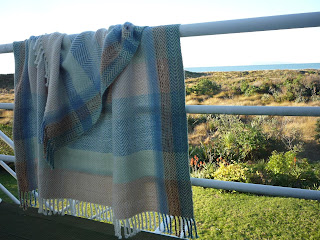 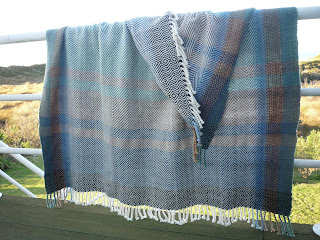 it has now become the softest yummiest blankets.
"Coast"  white wool warp and angora weft.
You would think that would make a dent in the "stash" but no, plenty left for more blankets. 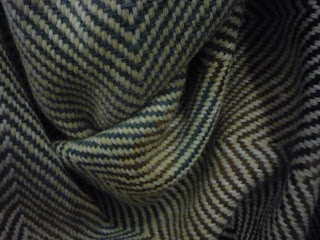