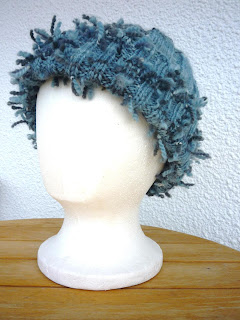 You might not believe I'm a weaver with the amount of spinning and knitting that appears on this blog but this hat is knitted from thrums.  I have bags and bags of thrums which I'm trying to think of ways to use up.  I tried putting it through the knitting machine but the machine didn't like the knots - it might work to try weaving on the knitting machine.  It does take time to hand knit, pushing the knots to one side all the time. 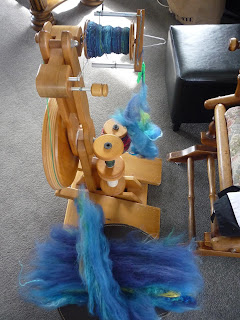 Here we have spinning from batts made from the "compost" heap as seen at Majacraft Magic camp recently.  Wonder if GrannyG or Jessica would recognise their hand dyed sliver now.  Also bits of silk, rayon and shaggy knitting threads in there.  My drum carder is a bit small so I had to divide everything in half and make two batts to get a decent sized skein. 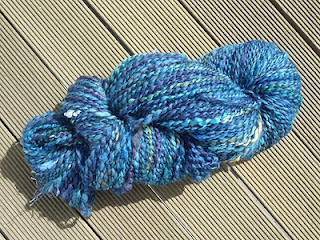 I've finally reached the point of deciding what to keep (and what to pass on) of my mother's.  Trouble is she kept everything and packed it in the draws real efficiently.  Who could pass up this old Patons Woolcraft booklet, cost one shilling.  When we in NZ changed to decimal currency way back in ?1967 that would have been 10 cents.  This is way older than that because tucked inside were these handwritten patterns, some in my mother's script and some in her mothers, all in fountain pen, of course.  Balaclava Helmet for Seamen,  Scull cap (Red Cross pattern), Mittens for Fighting Services.  Some of the patterns in the book are wonderful and could find their way onto my needles one day. 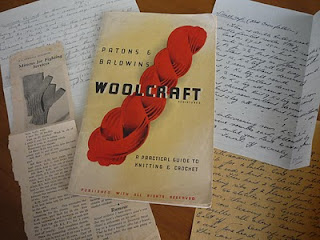 The poem at the end of the mitten pattern reads:
Rumour
Actual evidence I have none.
But my aunt's charwoman's sister's son
Heard a policeman on his beat
Say to a housemaid in Downing Street
That he had a brother, who had a friend,
Who knew when the war was going to
end.

So that's all this time, I've got wool in the dye pot which should be ready for rinsing.  I'm preparing for a run of blankets influenced by the tui bird.  Also have some shibori scarves being woven on the dobby loom but white twill is rather boring to photograph.
Posted by Dianne at 4:23 PM 3 comments:

Just spent a very relaxing but busy weekend in Rotorua at the Majacraft camp.  This is an annual event organised by Glynis and Owen; they looked so relaxed but I'm sure it took a lot of work behind the scenes to keep it flowing.  Several participants from USA and about 8 from Australia joined us.  Tutors were excellent including Flore Vallery Radot from Paris/Sydney, Heather Dunn and Mandie Chandler from Australia, and from NZ we had Jessicah Win, Heather Kearins and Genny Stevens.  There were a lot of "art yarns" floating around the campus in various stages of drying or being worn as neck warmers etc.  It was very free and if you didn't feel like going to a workshop you could sit on the deck in the sun and spin or walk around the shores of Lake Rotorua. 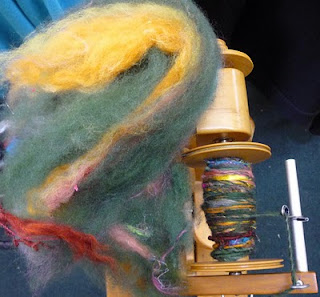 I have one of the early Majacraft Suzie wheels and Andrew was kind enough to give it some TLC so that the wheel doesn't wobble.  I was told my bobbins rattle cause they're more than 20 years old and the bearings are wearing.  I must give it a wax so that it doesn't look so neglected.
Posted by Dianne at 4:17 PM No comments: