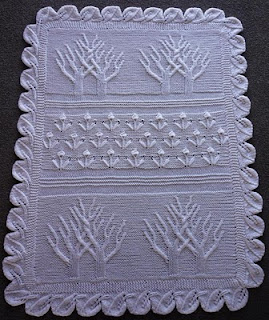 Lion Brand Yarn's Tree of Life baby throw for Kicky McFidgit.  Now I have to decide, or rather let DiL decide, whether to leave it white or paint it greens and browns.  There is a mistake in the cabling but I'm not going to cut threads to fix it.

I chose to make this because I loved the pattern.  Excuse my ignorance but does the tree motif have any religious significance?

This is an awful photo of this project partly because I'm nearly twice the size of the dummy but just to show I did persevere from the post at the end of July and complete the tunic.  (I can't make the link work.) 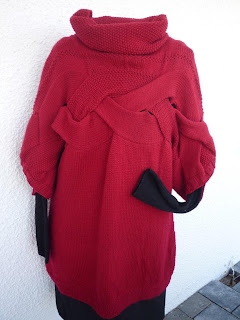 Maybe a little more stitching where the plait crosses and it stretched from a jumper to a tunic.
Posted by Dianne at 9:57 AM 3 comments:

Continuing the tale of November

The exhibition "Oarsome Waipa" hung for nine days and out of 30 pieces we had 5 sales so that wasn't bad odds.  Many things went wrong in that things promised didn't eventuate, but it was a great learning experience.  If doing it again I (or the group I was with) would want full control, with maybe a small committee with overall say and onsite to pick up the pieces when things went haywire.  I was proud to have been part of the exhibition.

﻿
About midday on the last day of the exhibition approximately 70 motor bikes came around the corner into our street and parked up just opposite the venue.  They only stayed about half an hour and as they were leaving I beetled out and asked anyone standing around if they had 5 minutes to view our exhibition.  Quite a few came in and as I was talking to one lady it transpired she lives not far from where I grew up and new my folks well - small world!

I had hardly got my breath back from Oarsome when I packed the car again and went off to Whiritoa early Wednesday morning to set up a display of my weaving at my friend's home and helped her serve tea and scones to a bus load of gardeners from Avondale.   About the third lady off the bus announced "my daughter tells me you have a blue jacket I should buy" and that was the last I saw of Esther until the bus left.  She had a very successful morning sales wise.  Me, naught.  (Emma, the dummy, was dressed but the poncho sold.)

﻿
On to the next project - a haberdashery sale to raise funds for the Waihi Museum.  I sorted through embroidery fabrics and books from my mother's stash and went along.  Needless to say my best customers were the ladies from the Waihi Embroidery Guild on the stand next to me.  It was a long day though; by 11 we were saying "another hour to lunchtime".  It was enjoyable talking to my next door stall person who is a spinner/knitter from Hamilton and has a bach at Waihi Beach so hopefully we'll meet up again before long.

The past week has been a blur of making the most of fine days to go bush walking, shopping in Tauranga and working on the Poutama (Stairway to Heaven) blankets in between times.  I might add that the walk down to Homunga takes 45 minutes and over an hour to walk straight up a very steep hill.  I was nearly crawling by the time I got to the top but had no choise but to keep going.

No pics of weaving as Pete has flown to Wellington today to his Aunt's funeral and taken my camera.  Later in the week maybe.
Posted by Dianne at 9:23 AM No comments:

To continue from the last post, we were walking along the beach and as we neared people I was handed the lead and told "its a woman's accessory".  I ask you! 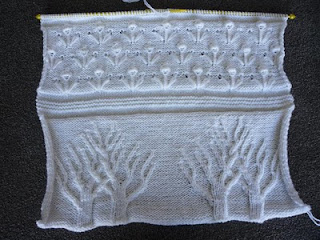 This knitting project has been so much fun.  Baby Tree of Life Throw from Lion Brand free patterns.  I've actually finished the body of the throw (another row of trees at the top) and about 1/3 of the edging is done.  Only 7 more weeks but I think I'll get there.

I don't think members of the Loom'nUs weavers cooperative will mind me showing pics of our exhibition on in Te Awamutu at present.  We had the opening of Oarsome Waipa last Friday and it runs till next Sunday.  This exhibition represents each artists interpretation of what the Waipa area means to them in terms of land, rivers, lakes, outdoor activities.  Just incidentally the World Rowing Competitions are on at Lake Karapiro at present. 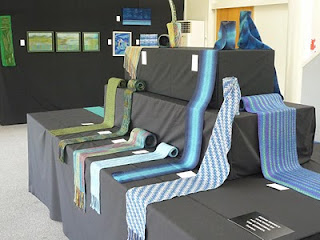 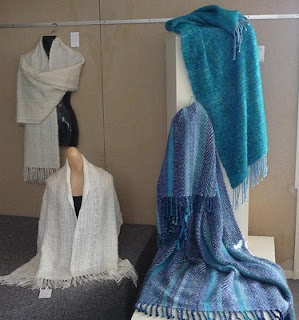 Two very clever members did the display for us.  It was a challenge as the screens I had been promised were nonexistent as was a lot of other things including signage.  I think we got a more interesting display by having to think outside the box.  There are a couple of other areas with work displayed as well.  The blue striped blanket is my work, Karapiro - Morning Mist and I have a couple of scarves in the top image.

The opening was the start of the Te Awamutu SCREAM Festival and our exhibition was included in that.  Shock, horror, I had to make a speech!  As we had already had the Mayor and someone else talk I was short and sweet.  While in Te Awamutu I met up with quite a few people and friends I had known from way back.
Posted by Dianne at 2:49 PM 2 comments: