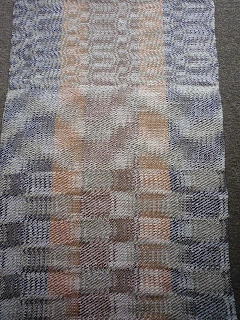 Two days to thread the loom with lots of crossed threads which I think are all fixed by the end of this sample.
I have to revisit the sett as I think too much of the white weft is showing.  Every alternate warp thread is an olive green and its not showing at all.  Conclusion - warp threads should be of equal strength of hue.
My aim is to find a treadling which I like for fabric for a jacket or tunic top or some such.  Any of these is suitable for tea towels but not what I was after.  The middle wavey line uses 5 end advancing treadling and it looked like blotches of colour on the original draft on the computer screen.  The top sample used a tie up with quite a bit of tabby and of course it weaves as basket weave on an interleaved threading.  The patterns would show clearer if I hadn't put stripes in the warp.  Anyone any suggestions.

So back to the drawing board.
Posted by Dianne at 9:00 AM No comments:

Why I live here: Reason 2

Lots of walking tracks, usually up hill and down dale. 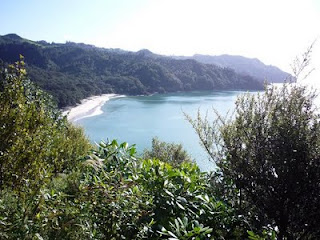 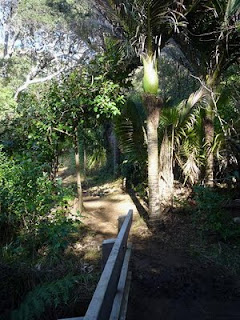 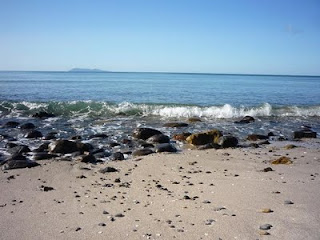 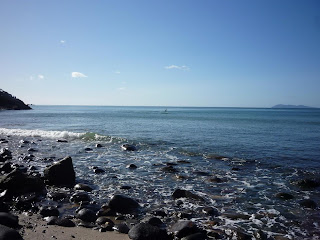 then (see the dot in the middle of the sea) 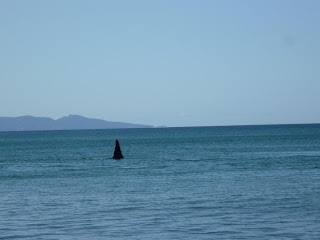 da dah
Mr and Mrs Orca and Junior came around the headland chasing dinner.  A magnificent site but most of my pics were out of focus.  Small as the waves were Mum and Junior were trying to surf.
Posted by Dianne at 7:56 AM 1 comment:

Why I live where I do. 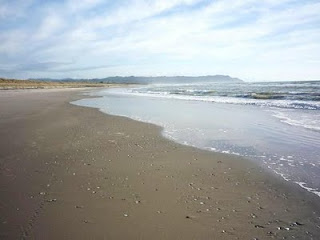 Ten kilometres of beach and not a soul in sight in June, very close to winter solstice.
Sand patterns - ideas for shibori. 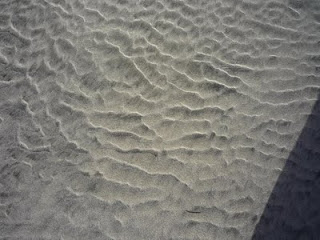 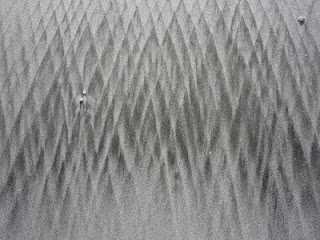 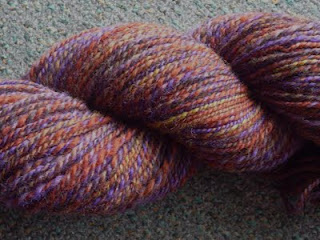 Handspun yarn, corriedale I think, just because I could. 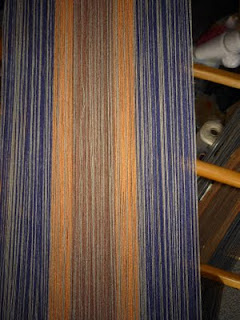 I really want to get a warp on the compu dobby and I have a plan.  I have a 7 metre warp woven and dyed so long ago I can't remember doing it but its variegated and every alternate thread had taken the dye less intensely than its mate so I've been thinking how can I make use of this anomaly.  Echo weave?  I've gone for an interleaved threading but I've never done one before so I went to my "ugly box" and found some cotton threads and thought I'd whip up a few kitchen towels and see how it works (picture above) then I can tie on the next warp.  They didn't look too bad when wound on the reel.  Some of those cones I've given away and they come back unwanted!  Last night I got to try the first 20 threads using the dobby to "treadle the threading" as there is no way my tiny brain can remember more than 2 numbers in a row.  This method makes it very easy but I couldn't see where to place the threads in the reed so its a daylight job. 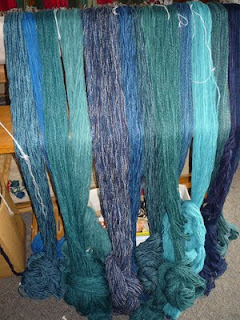 And this is another warp for yet another blanket, and a cushion this time.  It was actually tied on and wound on the loom yesterday so ready to go.

Unfortunately we do have to eat so its off to Tauranga today for a big food shop.  At least we're past the shortest day so spring and summer to look forward to.
Posted by Dianne at 7:56 AM 2 comments:

I probably learnt one of the most important things of my weaving career.  Tension of the warp.  When I started I used to ask and ask and pester - how do you know how tight to tension the warp.  In the end I was told just keep tensioning until the shuttle stops falling through the warp!  Not so.

When weaving with merino it should be loose enough to be able to press your knuckles into the fabric slightly.  It might only be the difference of one click of the ratchet.  This gives the threads somewhere to move when tension is released.

Thanks Margaret for that gem.  I'm going to have to revisit other types of warp as well.
Posted by Dianne at 7:22 AM No comments:

Getting it off my chest

We've had Queen's birthday weekend on 4, 5, 6 June.  A friend came to stay which meant taking all the studio overflow out of the guest room.  Luckily I could put it straight in the car for the Waihi Beach market on Sunday 6th.  First confession - not good sales.  In fact, none, zilch.  I swapped a hat for some smoked salt with the lady next to me.  I think I'll have to wipe that market off my list of places to sell.

The following weekend was the night of Arty Bra.  The show started with the compare singing and four guys on stage wearing bras from last year including my one.  Really enjoyed the show; some creations were brilliant some boring.  The Plunket ladies had done a magnificent job of making outfits for each bra.  They had made a white cap and apron to go with mine and the guy wore Jockey boxers and black fishnet stockings under the pinny.  Lots of goodies had been donated to be auctioned so three and a half hours later about ten bras went up for auction.  Confession two.  Mine was the last and the compare totally knocked the wind out of my sails by describing it as tacky and he didn't like it.  To set the scene this guy, slightly weightier than last year and sweating, was dressed in a bo-peep frock, long curly blond wig, ankle busters of platform shoes and blingy jewelry visible from space.  Do I sound tetchy?  I was.  This was an evening of entertainment.  I'm sorry, I don't find one cup covered in buttons, the other in bows or cups covered in felted white alpaca with little brown feathers around the edge cut it.  Will I enter again next year - probably to support Plunket.  Do I still like Rob - he is entertaining.

As an aside Rob used to own a fashion shop in a local town.  While he owned it I phoned and explained what I wove and made an appointment to see him.  What a fiasco.  He was late with a previous appointment, someone else called off the street and was told to wait till I was finished.  I had to open my case on the floor.  He'd jump over it to answer the phone.  He jumped over it to go collect something downstairs.  Everything was too highly priced.  Why don't I learn to save my dignity, zip the case and just walk out?

Early this week I had a day in Hamilton at a weaving meeting which I really enjoyed but can't think of any gems I learnt.  Maybe just keep my mouth shut.  Lunched with a friend and discussed the possibility of an exhibition together next year then I did some shopping - belt for a tunic, shoes that just begged to go home with me.

Now back to work.  I have nine scarves and two blankets to tag and get to the post (a 40 K round trip).
Posted by Dianne at 8:41 AM No comments:

We've been to Auckland again, this time for our daughter in laws birthday.  It's so wonderful to catch up with family and friends but I do believe the traffic gets faster and faster (except one 100 metre section of road where everyone knows there is a speed camera so they all slow down to 50kph then bury the foot the minute they're over the brow of the hill).  Us out of towners get confused, lost, flumoxed not knowing which lane we should be in or which motorway exit to take.  The final indignity as we were heading home was being over taken by a school bus on the motorway.

Because we were away I thought I had missed the deadline for the "Arty Bra" show this year but the local paper told me we had an extra week until Friday 3 June so I got to work with three days to do it in.  Creation so far: 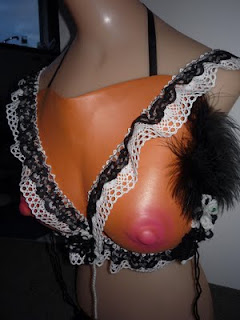 Hmmm.  The story is that for d-i-l's baby shower last year we had to dress in something beginning with 'b'.  So I wore these girls under my jacket and every now and then I 'flashed'.  As can be seen I still have some stitching to do this evening.  Thank goodness we don't have to model as they get firemen, surf life savers and any other guy whose willing.  The charity being supported this year is Plunket so we look forward to a fun night out.  (I wanted to call it "How clean is your house" but I'm going to the show with the presenter of the NZ tv show so better think of another title.)

Speaking of babies this is for Jack, aged 5 months.  This is version two as the first at 6-12 months was too small so this is 1-2 years.  He's a solid little chap, interested in all that's going on.  I thought the elephants appropriate as d-i-l used to help out at the zoo on a voluntary basis on her days off. 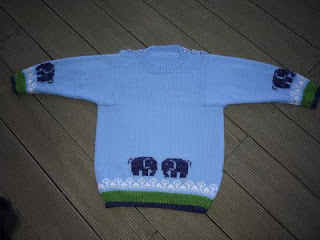 And to prove I haven't been slacking off altogether I've been winding and dyeing warps for blankets.  This was taken with a flash so the colours aren't true but I left it too late in the day for natural light.  Reminds me a bit of pounamu, our greenstone. 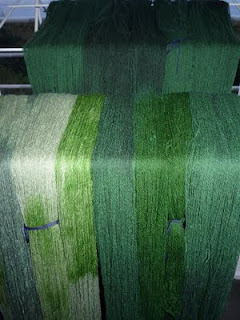 Posted by Dianne at 5:41 PM No comments: