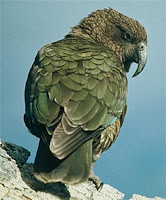 The New Zealand kea is an endemic parrot found in the South Island's alpine environments.

Kea are a protected species. They are rated as one of the most intelligent birds in the world.
To survive in the harsh alpine environment kea have become inquisitive and nomadic social birds - characteristics which help kea to find and utilise new food sources.
Their inquisitive natures often cause kea to congregate around novel objects and their strong beaks have enormous manipulative power.
Being lazy (or rushed for time) I've uploaded this information from Department of Conservation web site. 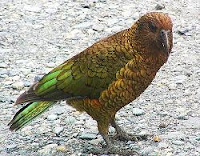 Kea blankets, soon to be available from Pauanesia, Auckland. 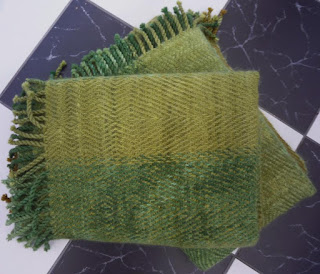 A while back I thought to use up some of the stash in an autumn blanket.  A friend said Nice blanket but I can tell you, you can't see a gap in the stash!
There were 28 chains of different yarns and colours.  I new I had to mix them up to alleviate the different shrinkage rates.  I didn't do too bad except the two chains I put together right in the centre and neither of them shrank as much as the rest.  No one will see when snuggled up to keep warm but I can't sell this.
Do the colours remind you of the Kea? 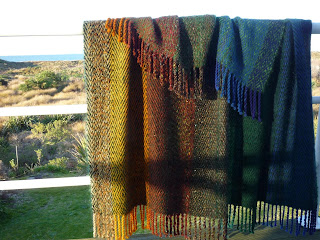 Exciting news.  This blog is going on holiday so after many adventures in Tuscany I'll tell you all about them in October.
Now to pack the suitcase.

Posted by Dianne at 4:22 PM No comments:

The flightless takahē (Porphyrio [Notornis] hochstetteri) is a unique bird, a conservation icon and a survivor. The takahē has clung to existence despite the pressures of hunting, habitat destruction and introduced predators.

The takahē was once thought to be extinct, but was rediscovered in 1948. Even today, despite years of conservation effort, the takahē remains critically endangered.
DOC's Takahē Recovery Programme in partnership with Mitre10 Takahē Rescue is committed to ensuring the survival, growth and security of takahē populations throughout New Zealand. 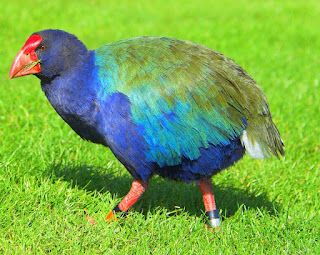 From an era when large flightless birds were spread throughout New Zealand, the takahē has clung to existence despite the pressures of hunting, habitat destruction and introduced predators.

The takahē was once thought to be extinct, but in the 1948 it hit world headlines when an Invercargill doctor, Geoffrey Orbell, rediscovered the bird high in the tussock grasslands of the remote Murchison Mountains, Fiordland.
Even today, despite years of conservation effort, the takahē remains critically endangered.

Are they just fat pūkeko?

No! A takahē looks similar to the common pūkeko, probably because they share an ancestor, so they are very distantly related.
However, where the pūkeko is skinny and blue with a black back, the takahē is much larger and more colourful. It has a large, strong red beak and stout red legs. Its gorgeous feathers range from an iridescent dark blue head, neck and breast to peacock blue shoulders and turquoise and olive green wings and back.
Adult takahē are about the size of a large hen, 50 cm high and can weigh over 3 kg.
Takahē are flightless. They have wings, but they only use them to display during courtship or as a show of aggression.
Takahē have lived over 20 years in captivity but in the wild few birds reach this age.
(Information from http://www.doc.govt.nz/nature/native-animals/birds/birds-a-z/takahe/) 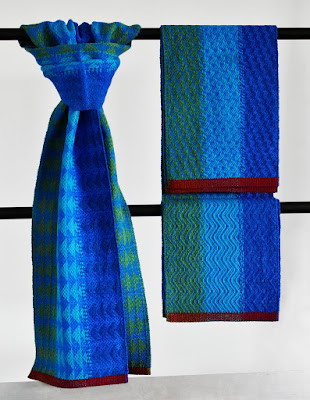 And that is the last in this Plumage series celebrating Pauanesia's 20th birthday.

I hope you've enjoyed learning a little about some of New Zealand's colourful native birds
and seen where I get the inspiration for a lot of my weavings.
Posted by Dianne at 11:12 AM No comments:

Tui, endemic to New Zealand, are boisterous, medium sized, common and widespread birds of forest and suburbia.  They look black from a distance but in good light tui have a blue, green and bronze irridescent sheen and distinctive white throat tufts (poi).

Adults have a notch on the 8th primary feather and this feather quivers from the narrow part creating the whirring sound common in flight.  They have a noisy unusual call but can also replicate human speech.

Tui are notoriously aggressive and will defend a flowering or fruiting tree from all comers.  They vigorously chase other birds away from their feeding territory. 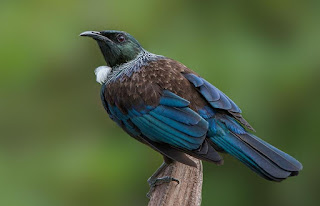 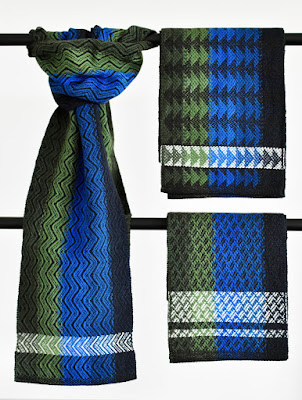 Our neighbours, the Australians might not be putting on a decent show at cricket for some weaver's liking but they beat the All Blacks at Rugby last weekend!!  But we won the netball so all's fair in TransTasman rivalry.

Sorry to be repeating information here but Kotare is one of my favourite colour way resources.

New Zealand's sacred kingfisher or kōtare is a cousin of the kookaburra in Australia. It’s ancestors flew here from Australia around 10,000 years ago.  Kingfishers are found widely in New Zealand in a wide range of habitats, the key ingredient being an elevated position for observation.   The Kotare is a distinctive bird with a green-blue back, buff to yellow undersides and a large black bill. 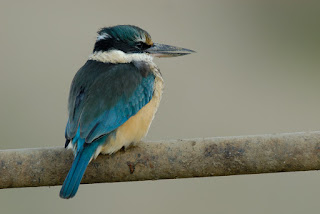 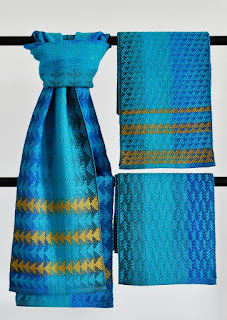 With a  population of around 45 individuals that includes approximately 12 breeding pairs, the New Zealand fairy tern is probably New Zealand's most endangered indigenous breeding bird.
It is ranked as an endangered species, and carries a "Category A" priority for conservation action.  A Department of Conservation Recovery Plan is currently in action.
The New Zealand fairy tern/tara-iti is the smallest tern breeding in New Zealand with adults measuring around 250mm in length and weighing a mere 70 gms.
During the breeding season NZ fairy terns are easily picked out be their black caps (coming around in front of the eye), soft grey feathers, white chest, yellow bill and orange legs.
In non-breeding plumage the crown fades into a mottled black and white, the bill fades to a dull orange-brown and the legs fade to a dull orange colour.
These delicate sea birds nest over the summer period on the rugged West Coast beaches and at two sites on the east coast of Northland, Mangawhai and Papakanui Spit.
Information from Department of Conservation. 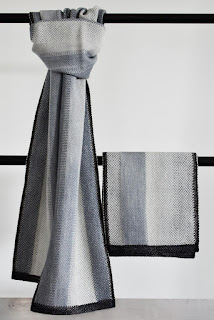 The scarves representing Kokako, Kereru and Tara-iti were woven in a false damask (2 blocks of 4 shafts each) with basket weave selvedges and a double weave hem using 16 shafts altogether.  All the merino was hand dyed.
Posted by Dianne at 8:24 AM 2 comments:

Kereru or New Zealand Pigeon or Wood Pigeon
grows to about 50cm and reaches a weight of 650 gms.
The head, throat and wings are generally a shiny green/purple colour with a bronze tinge to the feather tips.  The breast is white. 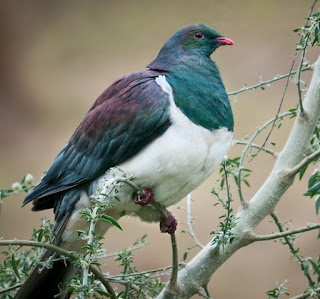 Kereru primarily eat fruit from native trees especially karaka and taraire and they are the only bird big enough to disperse the seeds from bigger fruit throughout the forest.  They also browse on leaves and nuts. 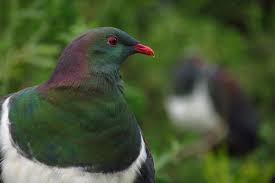 Introduced mammals such as possum and rats have significantly reduced the amount of fruit available and these migrants also eat the eggs and nestlings.
The kereru has been under total protection since 1921. 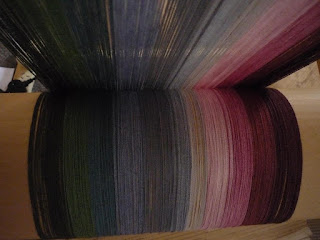 Warp, looking down on back beam 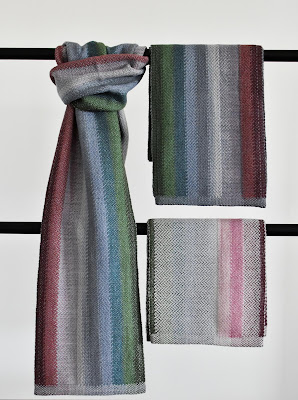 Three different grey wefts, dark, medium, and light on these reversible scarves, part of the Plumage series for Pauanesia.
Woven in false damask, 2 blocks of 4 shafts each, all hand dyed.
Posted by Dianne at 7:57 AM No comments:

Its not easy being green! 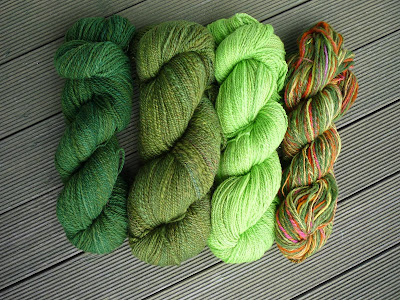 About 12 months ago I bought the first of these slivers from fibre2go at the Thames spin in.  I think I'm correct in saying the two on the left are both called Gone Bush.  The difference in colour is created by the different fibres in the sliver.  The far left skein is 100% merino, the second to left is 30% baby alpaca with 50% merino and 20% silk.  I decided they would be too dull together so at the next event I went to which was Creative Fibre Festival in Rotorua I went home with the multi-coloured rolag carded by Lyn from merino, alpaca, silk.  Not being a glitter type person I spent some time picking off the shiny bits (warning: it goes everywhere, found some in my bed last night) and thought this would be perfect with a few shots of orange until ... I opened up the rolag and found - fire. 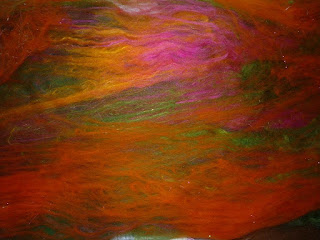 Took me weeks mulling over how to spin it and eventually decided to split the rolag lengthwise into 4 strips but realised that didn't achieve the separation of colour I wanted for highlights.  I broke a length off one strip and folded it in half to spin from the fold but that was still producing mud.  So then I took the length and pulled it outwards from the centre so that green was on green and the bright colours on themselves and spun from the fold a finer single than I had for the previous two skeins as I wanted to Navajo ply.  Would be easier to show than tell what I did.
Still not satisfied I then took home Spring Greens sliver, again alpaca, merino, silk combination, from the Cambridge open day.  I can't tell you what a pleasure it was spinning these fibres and how devinely gorgeous they feel.

Now what do I make from them?  Any suggestions?
I had thought of Color Craving by Stephen West but I've probably got enough yarn for two or three Cravings!
Posted by Dianne at 8:47 PM No comments:

The kokako is an endangered forest bird who's population has been decimated by predation of introduced mammals such as possums, stoats, cats and rats.
It is sometimes called the blue-wattled crow but is no relation to the crow family.  Its closest relations would be the tieke (saddleback) and the extinct huia.

Its a large songbird with an extrordinary haunting song.  It has a blue-grey body, a striking black mask and small vibrant blue wattles.
Kokako are poor fliers and usually bound around trees with strong legs and small wingflaps but can glide quite long distances. 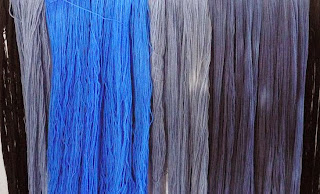 Every weaving starts with the warp threads all hand dyed to the right shade of gun metal grey and vibrant blue edged with black. 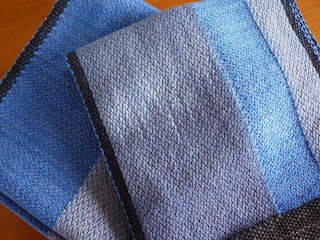 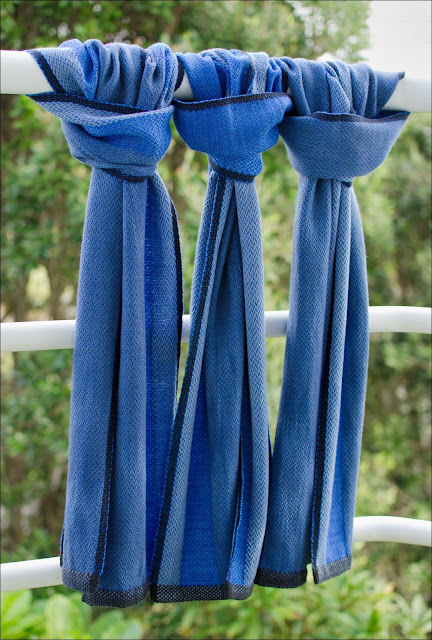