I've walked the beach, dealt with the washing, restocked the pantry, made yoghurt, been poked and stretched at physio and am now more than ready to explore fibrey things, if the frozen shoulder will allow.

We had a super holiday catching up with relies and friends in Perth (West Australia) and Melbourne and doing quite a bit of site seeing each day (if you rent a car you have to use it - no relaxing around here).  It wasn't warm like the Queensland coast but "light jumper and shoes" warm.  No rain but a storm was forecast for each day and then delayed and delayed until the morning we drove to Perth airport from Bunbury (two hours) and the heavens opened delaying our plane's take off by nearly two hours which meant arriving in Melbourne quite late.

I had a lovely time visiting with Tony Bennett, machine knitter, and when he realised I was interested in the garments in the shop he started bring out boxes with outfits he had entered into fashion parades.  The inspiration was priceless.  Also found Treetops Silk in Perth and came home with some lovely slivers which I can't touch until the shoulder is better.
In Melbourne I was taken by my dear cousin to ZiguZagu, a Japanese based store and did more spending although the stencils were too fine for what I wanted to do on handwoven fabric so reluctantly left them for someone else.  Beautiful Silks was on the itinerary and we were there so long I was given a cup of tea and more damage to the "plastic" just happened.  Melbourne Spinners and Weavers Guild have a large premises not far from where we were staying so I spent some time there browsing their wonderful shop and they had an exhibition featuring natural dyeing displayed.

We had a few days in Auckland on the way home to see the kids and I was Selector for the Auckland Spinners and Weavers Guild exhibition on Sunday morning.  An interesting selection of work so if in Devonport between 1 and 13 September go see it.

Great to travel but always good to be in ones own bed.

I need a holiday!

My goodness, I need a holiday.  The weaving just won't go right.  The blanket mentioned in the last post has a threading error right through it 2.2 metres, on both layers and its unfixable.  Grrr.

Meet Wingspan, a ravelry pattern.  I did a couple of extra segments to get a good wrap around for a scarf. 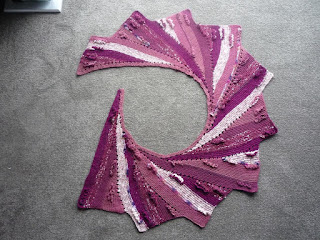 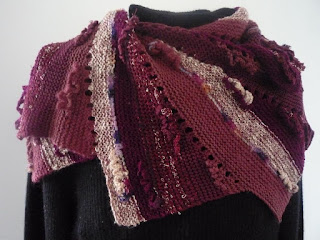 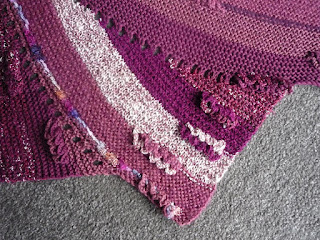 A close up showing how I crocheted the ends at each change of yarn.  Note that alternate colours went on each other, light pink on wine, wine on light pink to blend.  I did this thinking I could just tie the two ends together at the end of the crochet loops to form a tassel thus avoiding the needle stitching in but that didn't happen for some reason.

There will be no posts here till the end of August as I really am going on holiday ... to Perth, West Australia to see my brother and his family.  Here's hoping we find some sunshine over there because we have really really had enough rain.
Posted by Dianne at 2:36 PM No comments:

This week it was time to rethread my Nitschke 8 shaft for double layer blankets but could I find where I'd recorded the tieup.  No way.  So I had to sit down with pen and paper and do some mental gymnastics.
I thread the loom in a point twill, 1-8 x 4 then 8-1 x 4 with odd number shafts the top layer and even the bottom layer.  At each change of direction I miss one thread, either a 7 or a 2, otherwise one has double threads.  I used to go 1-4 top and 5-8 bottom but I realised the groups of bottom threads came out in one place between the 4 and 1 leaving a gap in the fabric.

So to the tieup.  Hold your hands palm together then roll them open holding little fingers together.  That's how your fabric will be so both palm sides have to match and the backs of the hands match.  In a straight 2x2 twill its fairly easy but if treadling a point twill creating diamonds in the fabric its important the right sides match each other when opened out.  Actually its only the centre of the diamond that is different and probably only a weaver would pick it up.  And I've recorded the drawdown in my workbook, my cupboard of information!  Two days ago it hurt my shoulder to stretch out to throw the shuttle, today I've woven 50cm and don't want to push it any further. 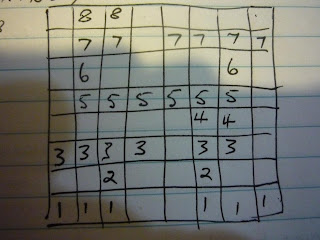 Now to my shoulder.  Tendons are torn - bad.  Most people have 1 - 2mm tears, mine is 9mm. Imagine a whole lot of  warp threads in a bundle and pull them apart.  Some stay intact, many break.  Physiotherapy and acupuncture is helping a lot and treatment was started just as the shoulder started to freeze so was able to halt that. Surgery is on the cards but am hoping if I can get it strong enough I won't need surgery.