At last the weaving has started for the year.  It has been such a strange summer with the warmer drier weather being very reluctant to arrive.  Good conditions to weave in but before that can start I have to skein the mohair outside so the loose fluff doesn't go everywhere including getting in the food and then dye the yarn and get it dry. 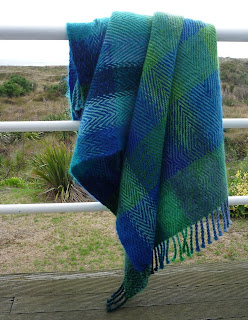 And, of course, the blankets need to dry after fulling.  These Kereru were all ready for the wet finish and we had five days of rain. 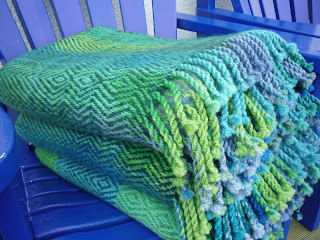 So hope the fans at Pauanesia are enjoying the new colourway for an old favourite. 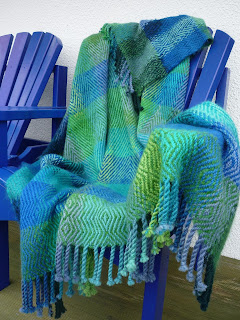 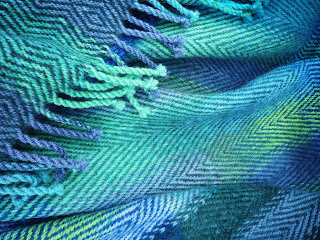 Posted by Dianne at 4:31 PM No comments:

What I discovered using 40/2 cotton

I'm writing this as it may help some who bought Japanese cotton from Agnes recently.  As you know my stash grew considerably! 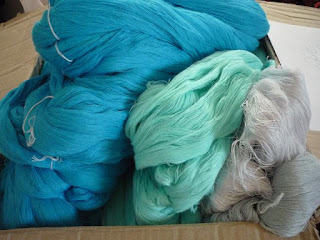 1.  I found it easier to unwind from the skein to a cake when the skein holder was vertical (like a ferris wheel).  My horizontal winder is wooden and not very free wheeling so tended to snap the threads especially the finer 60/2. 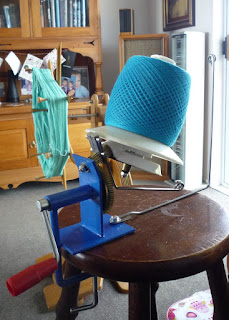 2.  Keep some tension on the thread as you wind it into cake.  Loose tension produced knots as I wound the warp.

5.  While winding the warp onto the loom there was a little twisting of threads with their neighbours and also a little pilling.  I put a row of tabby through the warp and separated it into two halves horizontally which helped a lot.  2 broken threads in 9 metres and one of them was my fault for not fixing a couple of crossed threads. 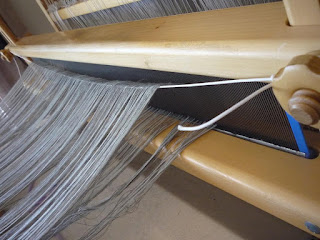 6.  I've woven one wrap with a tencel weft and it wove like a dream.  Next I'll use the cotton as weft.

Edit 7. Take your jewelry off.  Caught a thread on my watch clasp.  Flat ring even made trouble.

Edit 8.  I actually closed the sett to 36 doubled threads per inch and its much better.

Hope these thoughts help when using your fine threads.
Posted by Dianne at 12:58 PM No comments:

Over the past few months, way too many months actually, I've been working on some wall art.  I have done more samples for this project than I ever thought possible.  Some were necessary, some to use up warp.  But finally the commission is finished and delivered.  Here it is hanging in a shaded corner of my lounge. 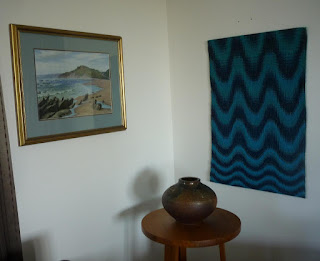 The yarn is hand dyed Romney, 4 ply in the navy and turquoise warp and 2 ply light blue and chartreuse in the weft. 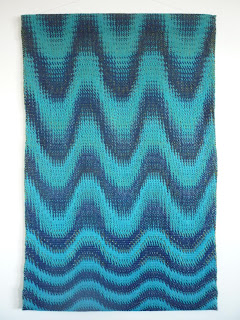 The warp is threaded in a networked line with an 8 shaft echo woven 4 colour double weave.  The treadling has five changes starting at the top with five end advancing and finishing with one end advance or straight draw.  Two end advance is basket weave which, in the hanging, gives nice texture.
At the same time I had seven changes going on in the tie up starting with 1:7, 2:6, 3:5 etc finishing with 7:1.  Quite a mind game keeping all this going and finding the correct place in the treadling to keep the waves flowing.
I look forward to seeing it in its new home soon.

Posted by Dianne at 3:05 PM No comments: