At the beginning of 2019 I had a request for a set of 30 woven placemats which I wove in December 2019.  These were to be the same as a set of 50 I had made for Eva at Chocolaterie in Dilsberg, Germany about 22 years ago.  These older ones are still in great condition even though they're used every day.  As the business has expanded Eva needed more to use in her concert room where a grande piano resides and she holds recitals.
Unfortunately the moths had munched the yarn I used originally so I used some NZ romney being a hard wearing fibre.  I had not kept records from the first run but remembered the brief had been "to look like Opoutere beach as you stepped out of the trees onto the sand".  Originally I had used a draft from an old Handwoven magazine for rep weave glass mats and luckily I found that. Decided to weave them in 2 lots of 15 mats each so set about dyeing one warp chain with navy, a murky mountain blue and teal, the second chain was left natural. 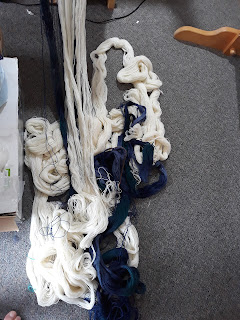 Threading the loom front to back. 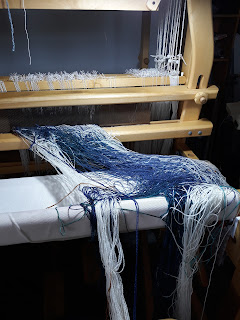 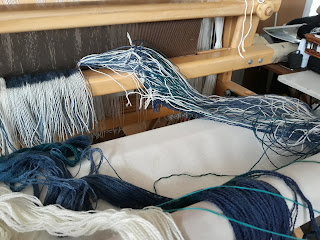 Tying on the second warp length.
I did make a booboo in the first warp in that I wove 3.5cm for hem at each end of each mat instead of the 2.5cm allowed for.  15 mats times 2cm equals the length of one placemat.  I was short one mat so had to dye and weave a third short chain giving Eva a bonus as I couldn't do just one extra. 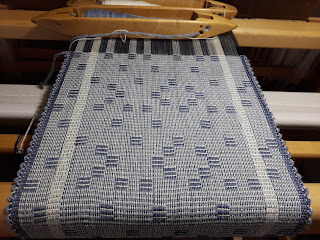 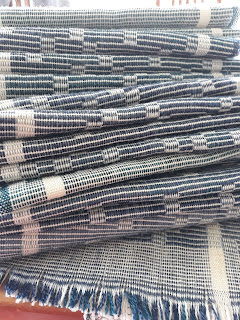 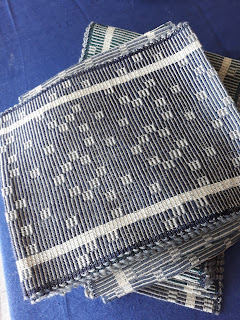 When I wrote to Eva asking what address to send the mats to she responded with "I'll come pick them up".  We had a lovely lunch with mutual friends. 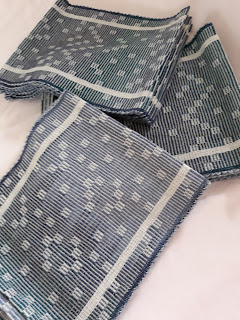 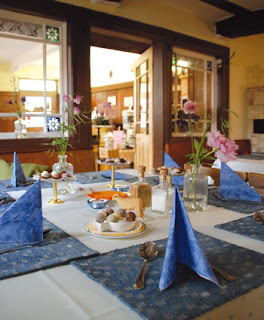 Chocolaterie, Dilsberg
Posted by Dianne at 7:46 PM No comments: