Are you tired of seeing this image yet? 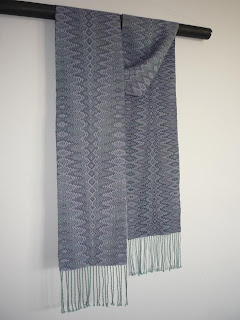 I just got word that this scarf won the Weaver's Award at the Bay of Plenty Area Exhibition - woo hoo!
Posted by Dianne at 8:00 PM 3 comments:

Had a lovely 3 day break in Auckland.  Went up feeling exhausted and returned refreshed, not that I did nothing!  There was cleaning, gardening, cuddling Zoe and playing with Jack, to say nothing of the traumatic incident of losing Chester the cat who had 5 stitches in his jaw and was wearing a cone over his head.  The brat turned up at 5 oclock when his mother got home from work and did he strut up and down the lounge saying I bested you!  No pictures of the grandies; can't take pics while cuddling!

I delivered a great pile of blankets to Pauanesia which will look wonderful in the shop. 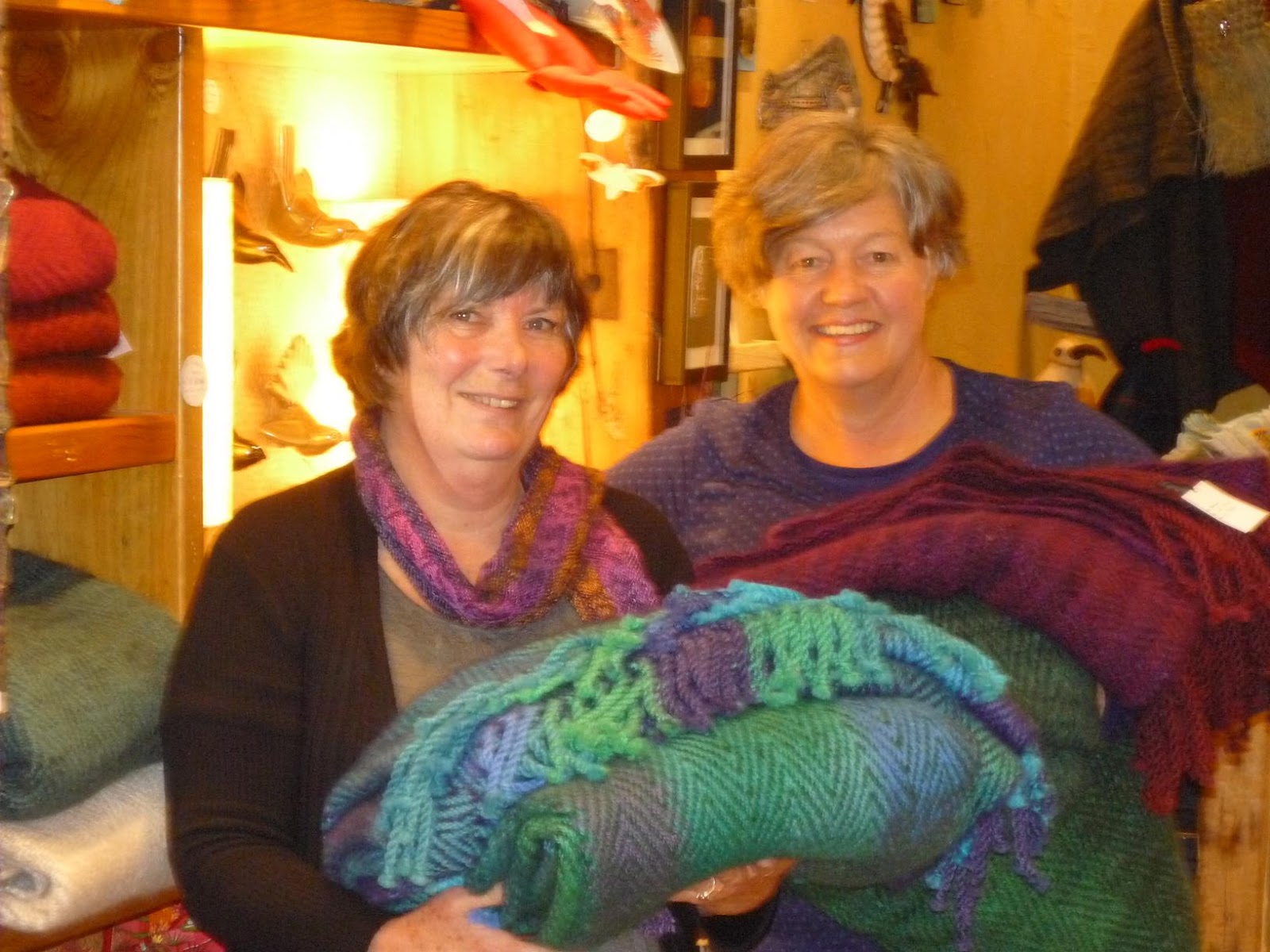 I came home expecting to strip down both looms for new projects but remembered I owed a lady "some weaving" for a couple of stainless reeds she'd given me so a 'Wrap for Yolande" it is.  I ran out of one colour so used some pale blue angora which I didn't expect to show up this much but at least its evenly distributed across the warp.  Hopefully it'll blend more after fulling.  This is echo weave. 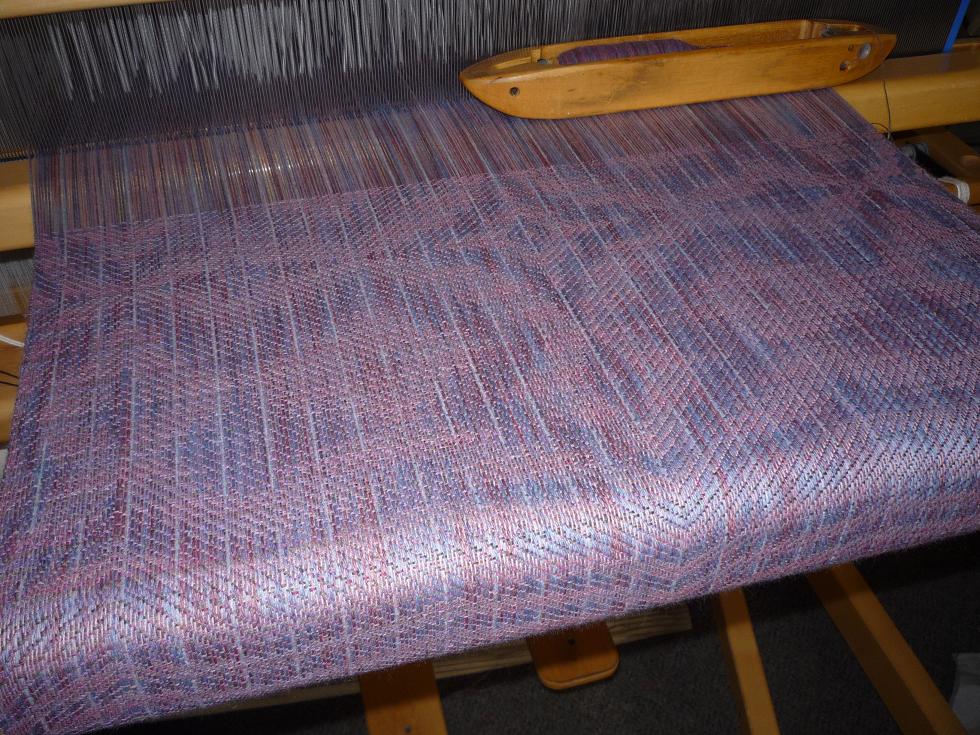 And I had been knitting.  Actually I did quite a bit of this while in Rotorua while Convention attendees were at workshops.  The boottees are Hodge on ravelry.  I dyed them violet and because the yarn is machine washable and I had been told that didn't take the dye so well I put just a little extra powder in the pot.  Oh dear, they'll keep Sophie warm anyway. 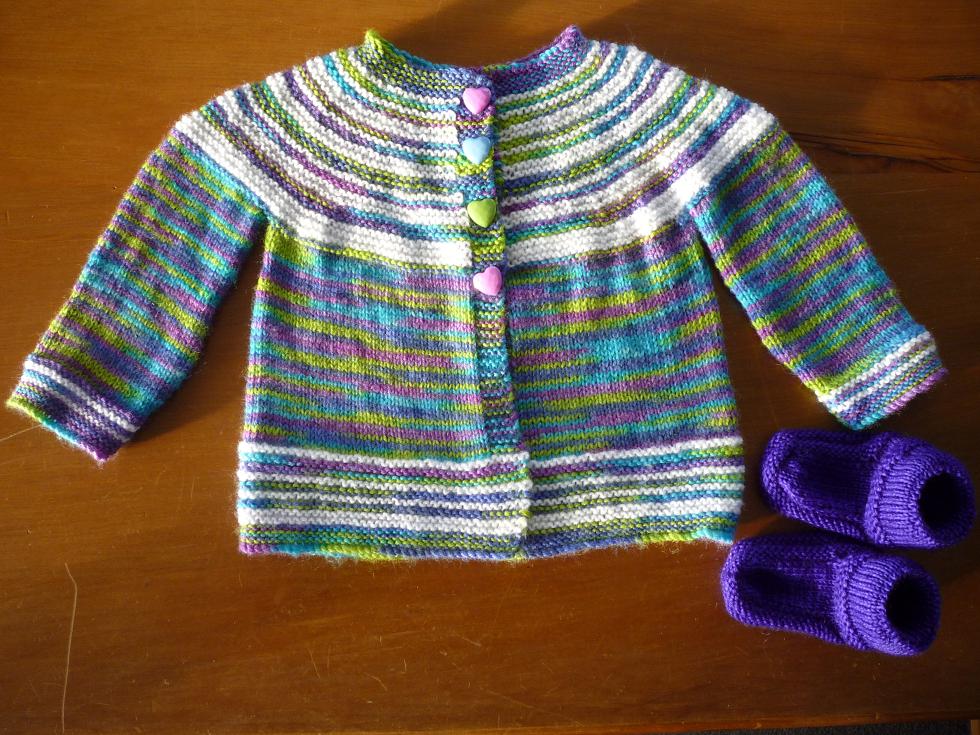 Having been zooming through photos to get these images I've been smitten by this again and might just put on a length of fabric before stripping the loom.  I best hurry!

What a strange climate we have.  While walking and driving recently I noticed some trees haven't completely shed their autumn leaves and yet gardens are awash with spring bulbs in flower, the blossom trees are in bloom as are the tulip trees.  And today is cold and wet!

Blankets have been woven in the last couple of weeks, one for my daughter who is allergic to wool so I emptied quite a few cones of manmade fibres in burgundy/wine shades.  Its pretty large as it didn't shrink, being of non wool variety.  It'll be great to snuggle up in on autumn or spring evenings.

And a couple of blankets in bordeaux/deep purple shades for Pauanesia.  They look super rich.  To get the purple to dye the mohair weft I mixed Jacquard purple with Landscape wild raspberry 3 parts to 2.

I'm off to see my grandies for a few days.  Have new projects planned for both looms when I return.
Posted by Dianne at 8:31 AM 2 comments: