Have been back from our fabulous road trip for a few days now and sort of coming up for breath but still way too many jobs on the list to get through!

We started our trip south by breaking the drive in Taupo and caught up with friends there for the night before continuing on to Wellington ready to catch the early morning ferry, the Kaitaki, to Picton.

Decided we needed a walk to stretch our old bones so headed for Queen Charlotte Park and drove up hill and down dale while winding around tight corner after corner but didn't find what we were looking for so, after a welcome coffee, headed west for Nelson.

Had a lovely morning with Meg over coffee and a great show and tell.  Meg and I met at a workshop with Randal Darwall way back 2006.  So much nicer to talk in person and see and touch fabric than look at pictures.  But I'll have the pics until next time.

The weekend with Professional Weavers Network was fun, energising, informative, inspirational.  We visited I-con Gallery, had afternoon tea with the Kayan backstrap weavers from Burma (that is a very sad story), had a physiotherapist show us exercises to help our bodies weave longer, had a talk on marketing and another on preparing an exhibition presentation.  There was lots of food, drink, talk and laughter and over all too soon.


We visited Jointworks Studio, chatted with Jane and Tony and saw Anne Field's AVL loom that was recently rescued from the Art Centre in Christchurch after many years exposed to the elements after the earthquakes.  After several weeks tender loving care and some electronic know-how its working again.  We then headed over Takaka Hill to explore Golden Bay and ending at Puponga at the base of Farewell Spit.


Took the walk to Wharariki Beach and was enchanted by a colony of seal pups playing around.  Pics on Pete's camera, I was too busy watching.  Those pups were just like any youngsters, jumping on each other, nipping, chasing, racing.  And posers - the older ones would slide out on the rocks and pose for the camera.


While in Blenheim we went to the Omaka Aviation Heritage Centre which I'll talk about in another post.  While there I got a text message to say our ferry back to Wellington had been cancelled and we had been placed on a later sailing.  Over the week we had been travelling rough seas caused by cyclone Pam had made the ferry crossings later and later so to get back on schedule they had to cancel one trip.  Bother!  I had visits planned.  What to do to fill in time.  Go visit a weaver of course.  Peg is not far off being a centenarian and, after major surgery, can't wait to get back to her draw loom.

Spent the night with Esther Nitschke in Feilding, a dear weaving friend who used to live nearby, before making it home late on Sunday.  Apart from two nights at seminar we had different accommodation each night for 12 nights, a wonderful trip but glad to be back in my own bed.  Good night.
Posted by Dianne at 9:00 AM 2 comments: 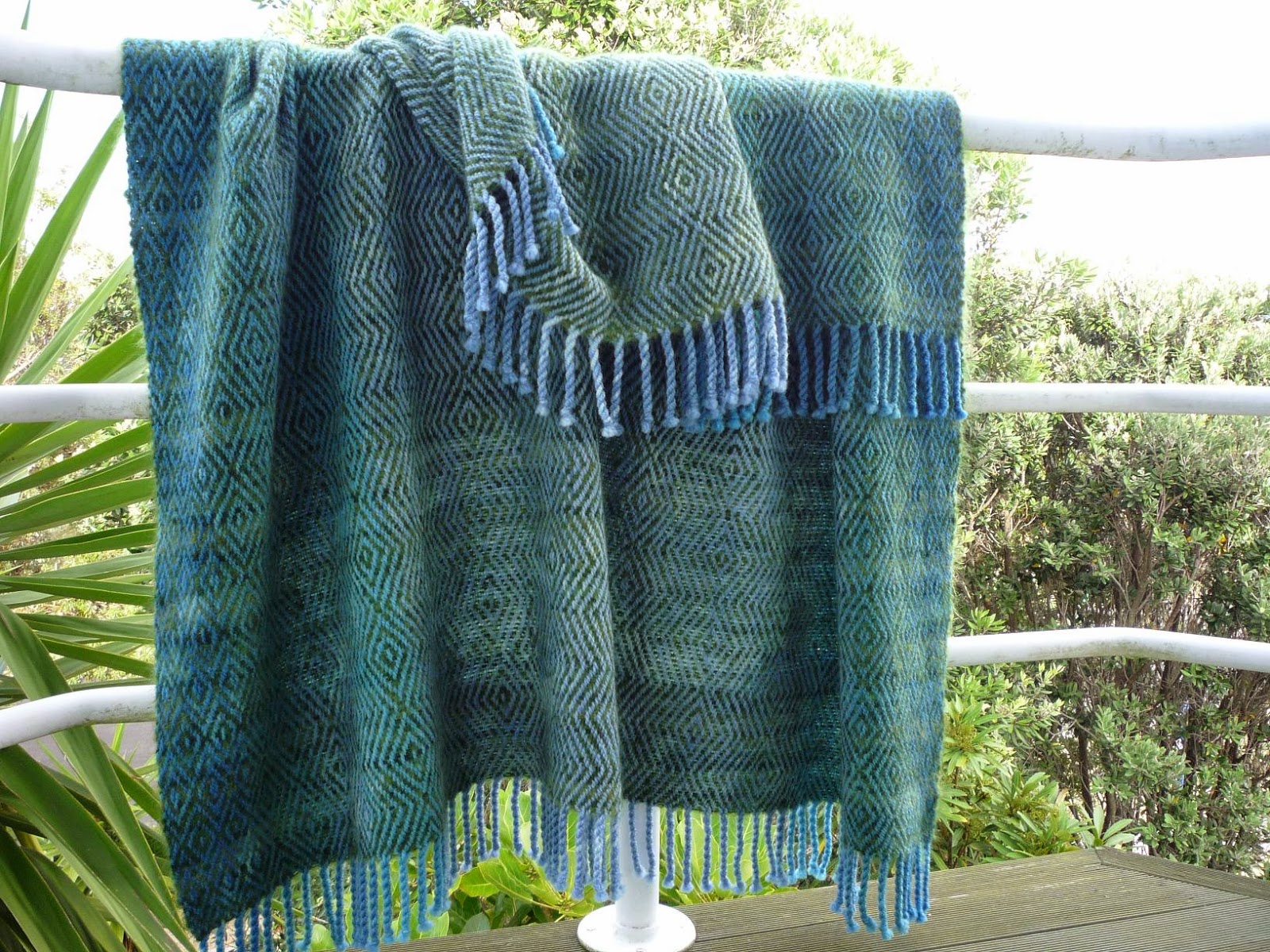 Two blankets off the loom this week and on their way to Pauanesia shop in Auckland.
They reflect the muted blues of Anawhata Beach and the bush leading down to it.

And we're off on a road trip to the Nelson area and to attend the Professional Weavers Network annual Seminar.  No doubt there will be more to talk about in a few weeks.
Posted by Dianne at 8:47 PM No comments: