So much has happened since our return from Crete but thought I'd share this story with you. 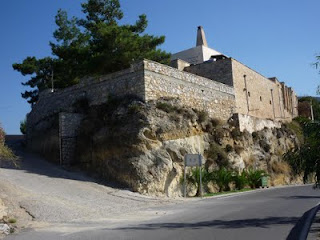 Before we left we had read about Monastery Irene which had been reduced to almost a pile of rubble before European Union money was donated to restore it.  The nuns had also studied, restored and practised the traditional weaving techniques of their area.

We went to the local Rethynon bus station and bought return tickets then found the bus we needed.  Driver says no.  We said that man said yes.  Driver winds down window and with much shouting and arm waving conversed with man in office who leaned back in his chair and laughed!  (At us or the driver?)

We new this was the last bus of the day but we thought we would be dropped at the monastery, the bus go to the end of its run and pick us up on the way back.  But no, we suddenly realised we were turning around and heading back the way we had come.  We followed the same road for a while then turned into a side road.  The bus stopped and we were told it was Monastery Irene and we should get out.  So much for our return tickets as the bus disappears into the distance.

We had a lovely visit with a nun showing us around the Monastery, then the shop which she admitted didn't have much stock as it was the end of the season.  I did buy a wee bag in the tradional inlay technique of the area.  I found out later that this is also done by embroidery with a needle and thread. 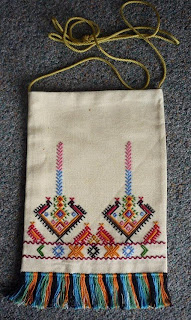 Then I was taken to the loom room.  The loom in operation was about 60" wide and had 4 shafts but 1 & 2 and 3 & 4 were strapped together and operated as tabby.  A fly shuttle was used.  A "usually reliable man" wound the warp on the beam, all 800 metres of it and this took about 2 years to weave off.  But the nun was having trouble with threads at one end of the beam not making a proper shed and breaking every time the shuttle was thrown.  I hope she has the problem fixed now.  She used mostly linen thread from France for the fabric and DMC pearl cotton for the inlay.  Occasionally silk from northern Greece was used for the weft, particularly on table clothes. 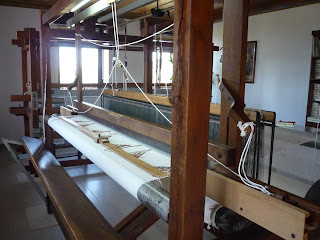 Then she asked us how had we come.  Oooh, no one has come by local bus before, everyone comes by taxi.  We understand why.  When we said we would have to walk the 5 km to the coast and catch a bus from there she pointed us in the direction of a one lane service road and we had a lovely walk about 4 km down hill past olive groves to the coast.
Posted by Dianne at 7:58 AM No comments: 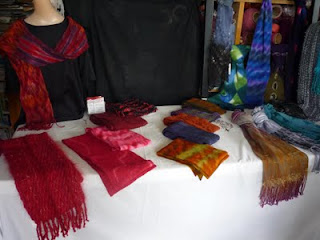 Tuesday last week I had 20 guests from the Pahoia Creative Fibre group (my guild) come visit my studio and have afternoon tea.  They were on a mystery bus trip taking in the Waihi Water Lily Gardens, lunch on the Waihi gold mine train, a mosaic artist and Val Tubmann, a painter, and my studio was the end of the day.
This was one of several tables displaying my weaving.  I have an upright set of rails for the blankets and several mannequins.  I had borrowed jewellery from my friend, Cornelia of Kaizen Design, and it was fun to colour co-ordinate the weaving and necklaces.  Unfortunately, it was all packed up before I thought of photos!

The ladies enjoyed the scones with whipped cream and strawberries and the zucchini and parmesan muffins and as they were running late and didn't arrive until 4 p.m. the cup of tea/coffee was most welcome.  Its always fun to catch up with my fibre friends and each time we have a get together like this I wonder why I don't go to more meetings.  So much to do, never enough time...
Posted by Dianne at 8:41 AM 1 comment: 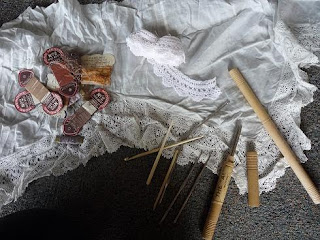 A selection of the treasure I have inherited from Mum.  Bone and steel crochet hooks, steel double pointed knitting needles in wood cases, bags of lace, some hand crochet yardage as seen here and the thread to mend stockings.  Is it silk?  The back of the card says "Please Note:  for heel, toe or top use as supplied, For The Leg split thread and use singly. 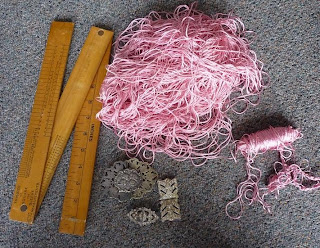 And this confused bundle of silk.  I see Mum had unravelled some and started to knit a few rows.  Think I'll leave that for a day when the patience isn't stretched.  The ruler is for dress making (Mum was a trained tailoress and why didn't I get lessons from her!), the McCabe Faultless System and seems to work in proportions:  proportion blouse sleeve only, proportion coat sleeve etc.  And buckles and buttons galore, EPNS, art deco, nothing was thrown out.

There are boxes and boxes of crochet cotton (can I weave with that) embroidery threads and fabrics, and books and mags in abundance.  Mum made and dressed ceramic dolls for a while and there are bags of fabric, laces, fastenings, jewels in miniature.

It'll be fun figuring how I can use these treasures.
Posted by Dianne at 9:41 AM 4 comments:

We are back from our excellent adventure in Crete, Santorini, Naxos, Athens and Dubai. 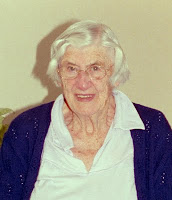 Unfortunately we came back to a very frail Mum and on Friday, after 98 years, she slipped peacefully from us.  I had some precious time with her and especially the Thursday when my oldest brother Roger joined us from Perth and Neville played hooky from work.  It was meant to be.
Posted by Dianne at 1:23 PM 3 comments: