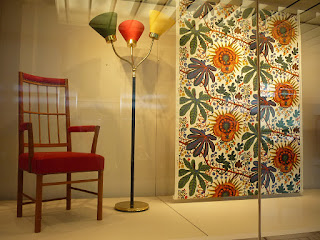 First, the San Francisco air port had a display of work by Joseph Frank from Sweden.  I wrote down the date of 1928 for this selection.   Its behind glass, hence the reflection.

We had a morning in Athens before our flight to Hania, Crete so chose to see the Benaki Museum.  This holds a collection of work from Neolithic times onwards and was donated by Antonis Berakis (1873-1954) to the Greek state in 1926.  Lots a examples of fibre and costumery.
I took photos of the descriptions so I'm typing them out for my benefit.

Fragment of a linen tunic band, decorated with a grid pattern of lozenges and medallions with symmetrical motifs.  From Egypt 8-9thC. 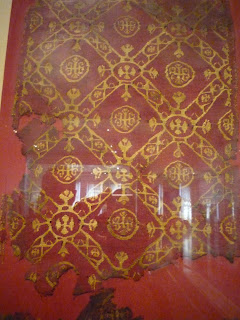 Linen and woolen screen curtain in the loop-weave technique with the representation of a praying couple.  From Antinoe, Egypt 5-6thC. 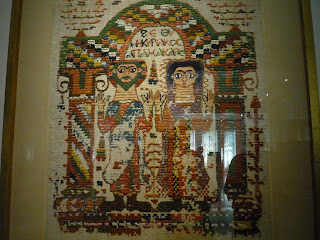 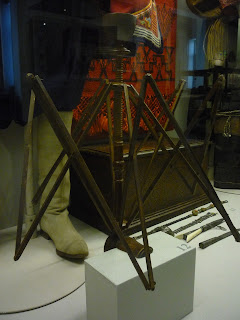 Spindle whorls of bone.  The painted or carved decorative motifs must have created a particularly pleasing aesthetic effect during the rotation of the whorls.

Wooden spinning wheel.  From the islands.  19C.  For the life of me I can't figure how this works as a spinning wheel but I love the skein winder in the background. 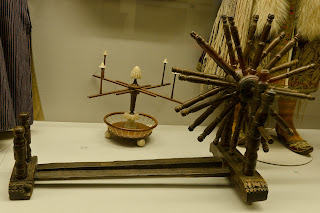 Wood carved loom from Crete early 19th C.  I have the feeling this loom isn't set up properly as the cords to the two shafts seem to be attached to the front beam.  Lovely carving and solid loom.  In the background (rightish of the loom) is a bridal tent. 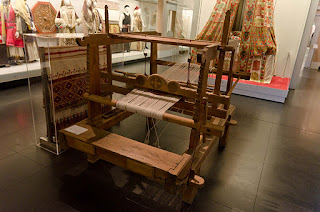 Tapestry for costume decoration, woven in wool and linen.  It is distinguished for the high quality of the workmanship and the grace of the depicted quail.  5th C. 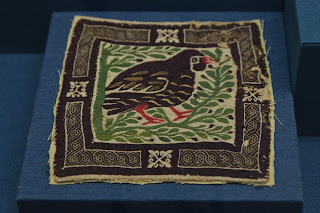 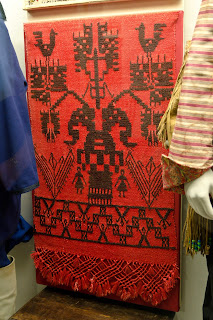 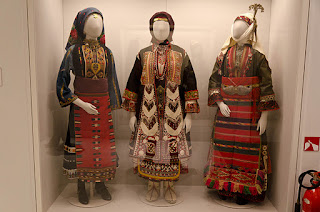 Posted by Dianne at 9:04 AM 2 comments: Links to this post

The good news is that all the oil that can be removed is off the Rena, container ship that ran aground off Tauranga Harbour, and any left will be "mopped up manually".  I do hope the mopping happens on board and not on the beaches.  Container removal starts today but with over 1300 containers and only 6 being removed per day it will take a while.  The spine of the Rena is broken so the fear is a storm could turn the whole situation to custard.

I finally got to sit at my loom last week and produced 5 metres of fabric which I'm calling wisteria.  This was the culmination of all the sampling I did during the winter of interleaved and echo warps.  I really can't say it is echo as I broke all the rules (as usual).  The warp had been wound with one thread wool and the second thread has some fibre which didn't take the dye (acrylic probably as I gave it the bleach test) so it was an echo of the main thread.  Unfortunately the threads had stuck together slightly so I had to stand and separate all 520 6 metre long threads before winding them on.  Wool is questionable to use for echo weave anyway but because it was now slightly fluffy it couldn't be sett as close as it should have been.  I did cut off a sample and wash it vigorously before preceding.  Putting all the elements together- the painted warp, echo weave threading, the warp sett I'm very pleased with the result though it is yet to be fulled. 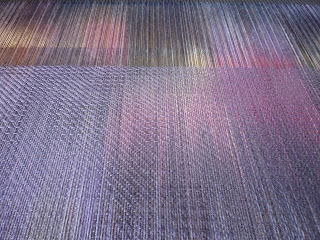 In the evenings I've been knitting a jumper for Jack who, we've found out, is allergic to wool and acrylic.  Not what you want to hear when his GranD has a house full of wool.  Our last two days of holiday were a stop over in San Francisco and as luck would have it Arftibers was just around the corner from our hotel, not even a block away.  I had arrived in fibre heaven, there were bins and bins of thread and sample squares knitted of each variety and complete garments on display.  I shouted Jack (note how I shift the blame) some recycled denim thread.  Its rather soft to work with compared to other denim threads I've used.  Also some silk for myself. 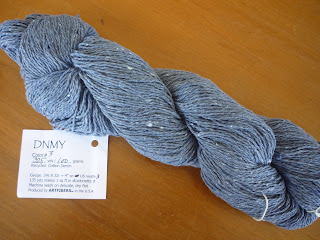 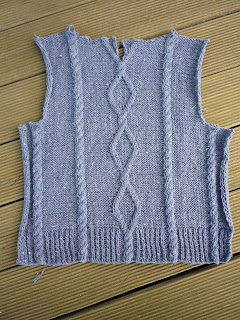 And finally I just heard that Peter Gordon, London based master chef, bought my kereru blanket from Pauanesia (go to gallery) as a gift for himself.  I'm one proud cookie!
Posted by Dianne at 9:23 AM 1 comment: Links to this post

Most of our trips are well organised before we leave home and we travel local transport where possible so, for instance, we new there was a bus stop right outside the rail station at Merced.  Approached the first bus that came along but it wasn't going our way but the driver got on the radio telephone and every bus in Merced new there were two New Zealanders waiting for the No 3 bus.  Next bus and the driver says not his bus but it would be there soon (if we didn't melt in the heat waiting).  Sure enough No. 3 bus came and we got a wonderful ticky tour around the city seeing streets and sights we would never have seen in a taxi going straight to the motel.

Leaving San Francisco I asked if I could take my knitting on board and it was no problem but as we were leaving Frankfurt from the 4 hour stop over I was pulled aside and they nearly took my set of 4 double point steel that had belonged to my grandmother away.  I was told it was wrong and got my knuckles whacked but begging let me keep them.  Because of all the problems in Greece and the austerity measures the air traffic controllers were on a go slow so we had an extra hour on the ground in Frankfurt so I was real glad of the knitting.

Arriving in Athens for our nights stop we dragged our bags the half kilometre to the metro office to find one lonely man telling everyone the trains were on strike and we would have to bus.  That wasn't on our plan at all.  We had no idea where we were in the city but at one stage the bus was stopped at lights and so I suggested Pete ask the driver where the closest stop to our metro station would be.  "Last stop, get out now" so out we got into the traffic, looked over a harp of roads and saw our hotel neon lights.  Someone was looking after us.

The flight from Sitea to Rhodes was two hours but in that time we touched down at two small islands.  One leg was 5 minutes and in that time the hostess gave the safety discourse in two languages, Greek and English, and had time to give out birthday celebration chocolates to the passengers we had just picked up.

As I mentioned in the last post we struck a storm while on Symi island and the catamaran ferries can only run on flat seas.  One ferry stayed docked all day Saturday but left Sunday morning, the day we were to leave in the afternoon.  By mid day the weather had packed up again and we approached the ferry office to confirm if they would be running as we had two planes and a train to catch the next day.  They wouldn't tell us (but we found out later the boat had already been cancelled) and they closed the office for siesta.  Later in the afternoon we decided we better try to get on the cruise ship, the Aegean Glory, which was returning to Rhodes at 4pm.  Had to beg the captain who had to get permission from the harbour master but we made it in the nic of time.  Cruise ships are not supposed to take casual passengers so we were very grateful.

The day after Symi Rhodes we travelled by car to the airport, plane to Athens (more go slow hold ups), plane to Rome, train to Rome city, train to Naples, train to Castelamere di Stabia, most of these prepaid and booked so you see why we had to be off the island.

Before leaving Greece we caught a brief news clip mentioning NZ and I saw a picture of a boat aground and what looked like our beach, Waihi Beach.  It wasn't until 4 days later in Italy we were standing in a queue to get a bus down the Amalfi coast (more rain I might add) and I saw a man with New Zealand across his black shirt so approached him for news.  Sure enough the container ship had gone aground at Tauranga harbour and this man said Waihi was the first beach hit by oil and if I wanted to swim this summer I better hit the beach with a shovel.  We spent the next week believing this but turns out he was wrong and our beach is quite clear.  I feel desperately sorry for those hit by oil slick but quietly pleased we are clear so far.  The Rena still has 300 tonnes of oil remaining on board before the containers can be removed.

The start of our homeward trip had a rocky start when our train from Naples to Rome was delayed by 180 minutes.  We rebooked on the express (that travels at 320 k/h - what fun) and got to Rome no problem and walked underground to catch the train to Fumicino (near Rome airport).  It wasn't until we were on our plane the next day I read a news broadcast and it seems there were riots in Rome city and a bloodbath outside the Colluseum!

Next time some fibrey talk.  My loom is threaded and, after two months, I can't wait to throw the shuttle.
Posted by Dianne at 9:20 AM No comments: Links to this post

A bit late reporting in but as usual after a busy exciting trip I got home with ill health and had to take to bed for a few days.  Just got cleared up and I've spent the last weekend in Auckland teaching shibori to a great group of girls.  Of course, a weekend is extended as it takes a day to get there and another to get home.  Wonderful to see family (i.e. grandson - he's so cute) and catch up with friends as well.

We had the most wonderful trip and saw so many different things that I couldn't say any one experience was better than another.

I'll give a quick run down of the trip.  We decided to fly to Greece via San Francisco where we had a 4 night stop over after a 12 hour flight.  Did we rest?  No, we trained inland to Merced as a base to get to Yosemite National Park, an extraordinarily majestic experience.  A second 12 hour flight over Greenland and Scotland to Frankfurt and a 5 hour stop on the ground before flying on to Athens for one night when we flew to Hania on Crete (still our favourite place).  Bussed to the east end of the island and met and spent time with Pete's cousin at Kritsa before bussing on to Sitea.  Flew to Rhodes and really enjoyed our time there before boating to a wee island called Symi, the driest island in the Greek archipelago (they bring their water in by ship) and we struck two days of torrential rain, lightning and thunder and power loss.  From Symi we boated back to Rhodes so we could fly to Rome where we trained straight south to Castelamere di Stabia (south of Naples).  Three days saw us at Pompei, Heraklion and a trip down the Amalfi Coast.  Back to Rome for one night with an early flight back over the pole to San Francisco for a couple of nights before home.

After sorting a few things at home we lay down for 40 winks about 4pm (that's 40 minutes) and we woke at 4 am the next day!