Winter has struck with a vengience; heavy rain warnings for Bay of Plenty and the Coromandel and my street is flooded at both ends so a great day to spend in the studio.

Saturday was market day in Whangamata where they open the doors at 8 am; how uncivilised.  It takes an hour to get there from my home.  A great crowd came through but I didn't sell a great deal; enough to have made it worth going but just little things like fingerless  mitts.  My friend with her jewelry stand, on the other hand, did very well and kept calling for help.  I did have visits from two people I supply and have enough orders to keep me out of mischief for quite some time so a good day to get on with it.
Posted by Dianne at 8:41 AM No comments: 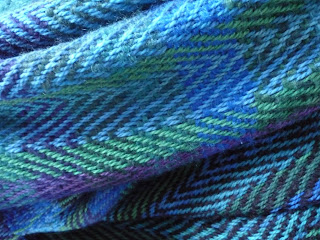 There are actually two blankets here.  The one in the bottom right corner has black warp and the second has stripes of blues and greens similar to the warp. 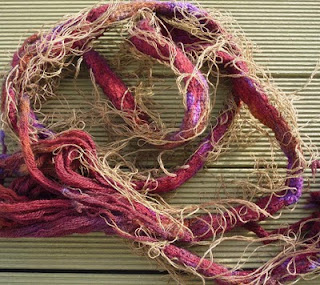 A shibori worm!  After the fabric came off the loom I dyed it using a shibori technique and then pulled up and knotted the supplemental threads ready to dye the loom controlled shibori pattern into the scarf.  I'm not going to show any more of the finished scarf as I think it is so fabulous I've put it aside for the Bay of Plenty Area exhibition. 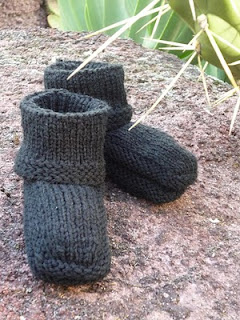 Another pair of Hodge boottees, these are a bit bigger at probably 6 months size.  Had a wee disaster as when I was finished knitting the reverse stocking stitch side showed on one of the fold downs.  Rather than reknit the foot I pulled a thread and reknitted the fold down.  Not as neat as it could be but when little feet are cold .... 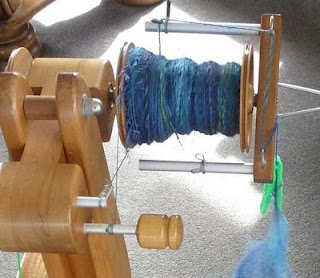 See that peg hanging off the thread!  I don't know why I didn't think of this (saw it at Majacraft Camp).  I use pegs to hold yarn on the knitting machine, I pop pegs on loose warp threads on the loom, I use them in the pantry to close packets and in the freezer and now on the wheel.  No more winding it around (and around and around) the tensioner or the hooks where it never held anyway but I kept trying. 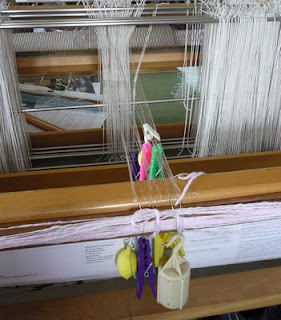 Talking of pegs (I told you I use them lots) this is a secret project I've been working on for an exhibition - monofilament and wire.  They don't mix folks.  But the weaving part of the project is now done and all these weights a distant memory.
Posted by Dianne at 6:21 PM No comments:

Have been weaving blankets; was about to start another one when I realised that some of the mohair was handdyed (and had therefore been in hot water) and some was straight from the warehouse so put the unwashed into hot water for a few minutes so hopefully it will have shrunk it if it was going to.  So, while waiting for that to dry what shall I do?

I've replaced the foam on the knitting machine felt bar with door draft foam trim and ironed vylene on to that so hopefully the needles will slide properly and I'll be able to knit lace.

While dyeing the wool and mohair for the above blankets I threw a little romney sliver into each pot so I now have a collection of bits to spin more "compost" yarn (as learnt at the Majacraft Camp recently).  Must get some mohair locks from the Pokeno place when next heading to Auckland as they add vibrant colour and a little shine.

Last Friday I had a very pleasant outing to lunch at the Ohinemuri Winery in the Karangahake Gorge to celebrate the hanging and opening of an exhibition by Esther Nitschke, weaver from Whiritoa beach.  It'll be hanging right through April so if anyone's passing through the Gorge do pop in; the food and coffee are great too. 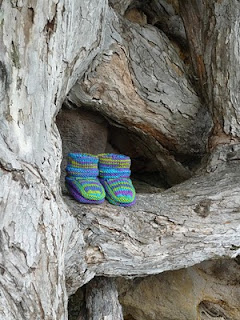 These boots were made for walking - or exploring Hobbit homes in old pohutukawa trees.
Posted by Dianne at 11:47 AM No comments: