Why did I let myself be talked into it? 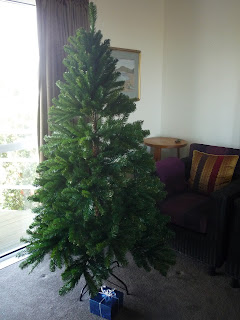 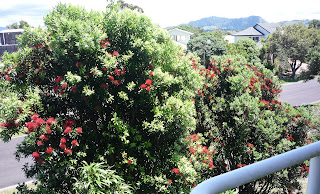 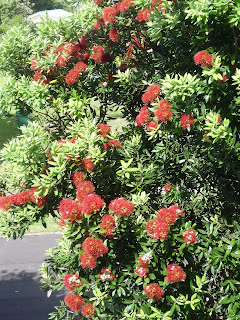 outside the lounge window.

A very special festive season to all my readers and a healthy and happy 2012.

PS  The tinsel tree has been decorated and a few more parcels organised.
Posted by Dianne at 8:27 AM No comments:

The structure is double layer double two tie unit weave which doesn't sound nearly as romantic as Kete.  The Maori use this same weave in their flax kete (kits). 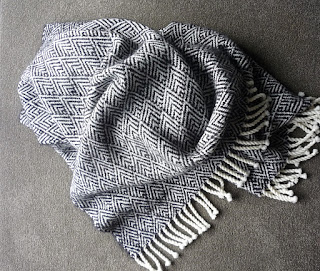 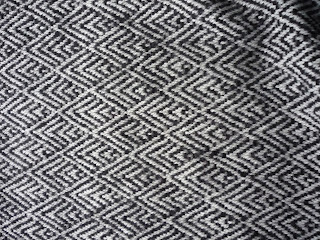 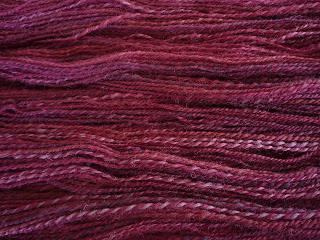 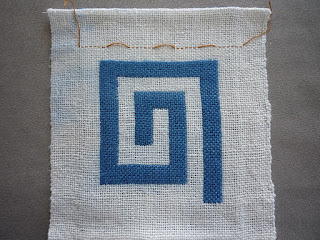 Greek key, my first attempt at double weave pick up, which I really enjoyed.  But shock horror, can you see where the dye ran into the white.  Is there any way to remove the run of dye?  The rust thread is a guide to rap it straight around a canvas block.  I will have another go at this as I like the clean lines. 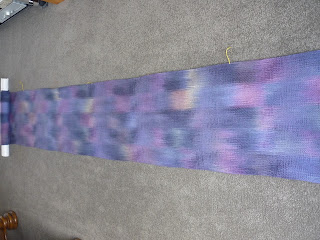 The blotchy variegated fabric using space dyed warps, one dark and the other an echo of it.  Woven echo weave, 28 epi, 560 threads, wove almost 5 metres giving me approximately 4.5 metres of cloth.  I'll have to do some fancy cutting out to obscure the band that stands out as being different (shame it wasn't on the outside edge).  The cotton tags are my half metre marks as I weave which I find less muddly than using string or a tape measure which I always seem to get tangled in and pull on.  I cut the tags before I start weaving and as they're used I know how many metres are woven and how many to go.  The tags also give me an idea of take up and shrinkage after fulling, in this case shrinkage was 4 cm per 50 cm, and a pause to stretch my back.
Posted by Dianne at 10:46 AM No comments:

Eumachia was priestess and one of the most prominent citizens of the city of Pompeii. She was patroness of the guild of fullers (cleaners, dyers, and clothing makers), one of the most influential trade-guilds of the city because of the importance of the wool industry in Pompeii's economy. Although her ancestry was humble, the fortune she inherited from her father, a brick manufacturer, enabled her to marry into one of Pompeii's older families. She provided the fullers with a large and beautiful building on one side of the Forum which was probably used as the guild's headquarters. 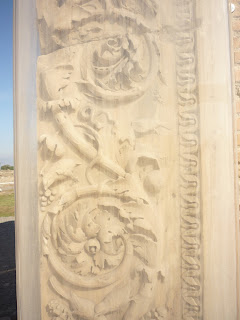 The elegant doorway is faced with fine marble which is carved with acanthus leaves. 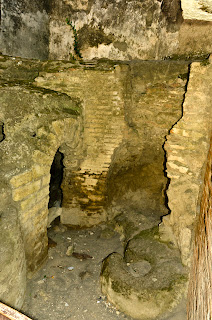 This small room's entrance is to the right of the main marble arch.  Gentlemen could discretely pop in while passing and pee in a buried urn providing a source of urea for the cleaning process. 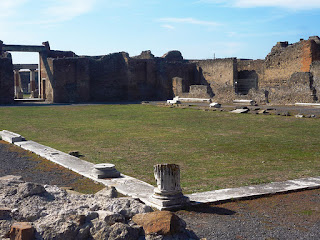 Fulling consisted of cleaning raw wool or cloth in vats of urine, soda and fuller's earth.  The workers trod the cloth in this mixture to clean it.  It was then rinsed in a series of other vats and hung to dry.  The cloth was combed, brushed and trimmed and white cloth was bleached by laying it on a cage over burning sulphur and brimstone.  The final process was the pressing of the cloth which was done in a press at the entrance of the fullonica of Stephanus, the most famous of four large laundries in Pompeii.

Weaving in Crete and Rhodes

When in Chania two years ago I found this shop, Roka Carpets, full of woven goodies and right at the back was a LOOM but the shop was never open.  I would stand at the window and peer in, like "the little match girl".  I eventually learnt that the weaver, Mihalis Manousakis, had had to get a job that paid "real" money to support his young family.
Roll forward two years and the doors were open and Mihalis's daughter was there looking after the shop on behalf of her stepmother, Anja, who was now the weaver.  Mihalis is working as a scaffolder.
Can you see the leather straps in the centre bottom of the photo?  These are the "foot pedals" and they must get develish hard on the back pushing forward and down to make a shed rather than just down as our pedals do.


Two strips of cloth being woven simultaneously and paper to separate the projects.
Bamboo poles as leash sticks.


I love the tangle of threads on the centre support of the swift and the tree trunk its resting in.
The Roka patterns are from Minoan time.
One of my questions about Greek weaving has been, why have the traditional looms never been developed to make the weaving easier and why still just using two shafts.  On occasion I saw a four shaft loom but shafts 1&2 and 3&4 were tied together to act as a two shaft loom.  Maybe the answer lies in this article in the Crete gazette where they say
"There was a time on Crete when every house had a loom. Weaving was as essential as cooking. "
Weaving wasn't a fun thing to do or an art form but part of the daily chores.
Before we left home I had read that Kritsa was the centre of weaving on Crete and as this was one of our destinations to meet up with Pete's cousin I was quite excited but, alas, it seems the last weaver had recently passed away and, although several ladies had looms in their houses and were interested in learning weaving there was no one to teach them.
If you enlarge the pictures you will see on my left on the floor a roll of the fabric (rag weaving in this case) being woven.  I really need another look at this in reality as some is rolled around the beam as its woven then, when there is too much, its still attached but becomes this separate roll.  When the warp is finished it is then cut up into whatever product it will become.  You can see the dear wee lady whose loom it was holding up a runner in the background.  I gathered from her demonstrating that she had a very sore back.