Two sitting in Auckland parcel depot,
two on the loom,
two waiting their turn on the loom,
and one more.
Here's a hint. 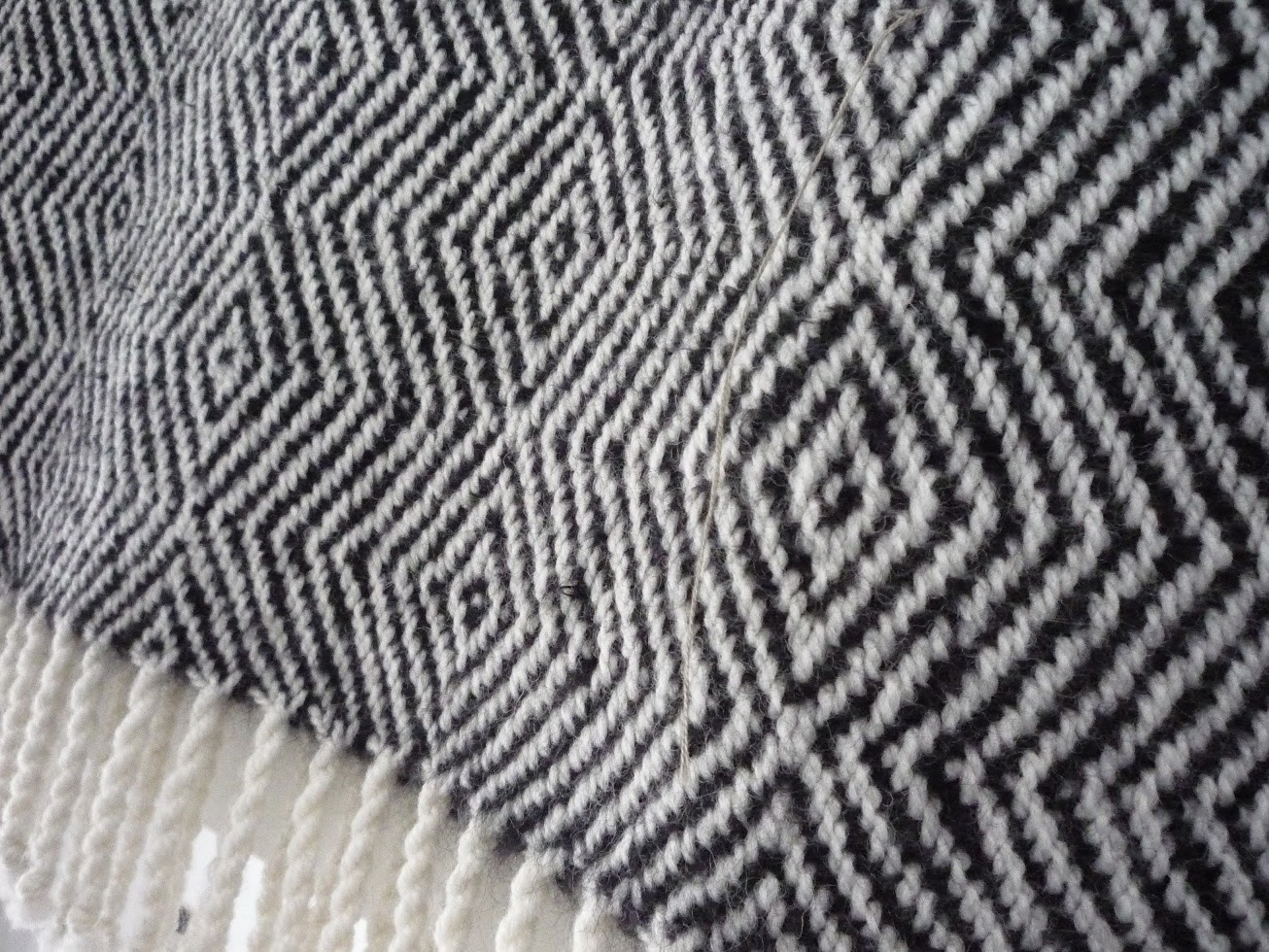 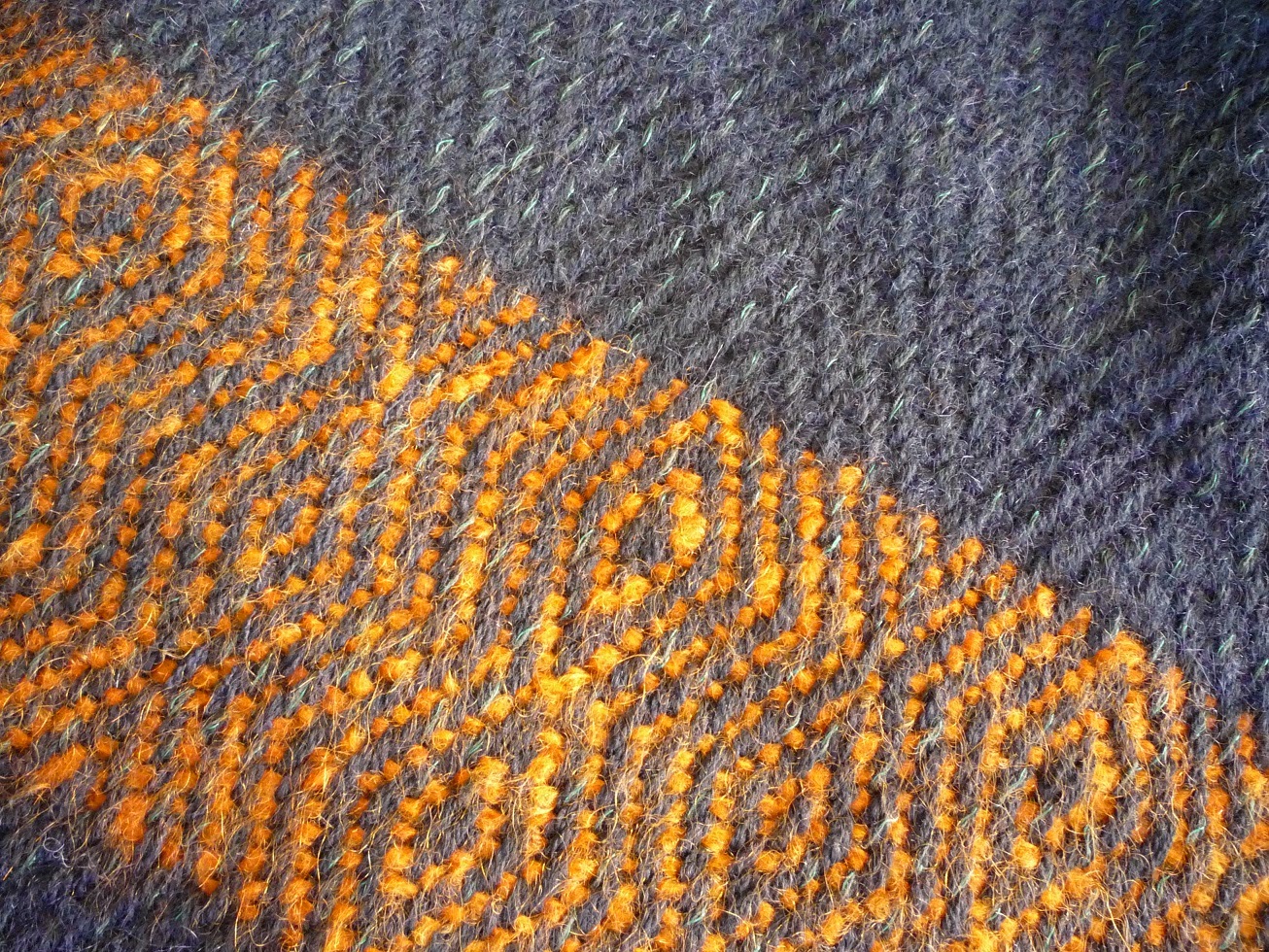 Rinda's jacket and other knitting 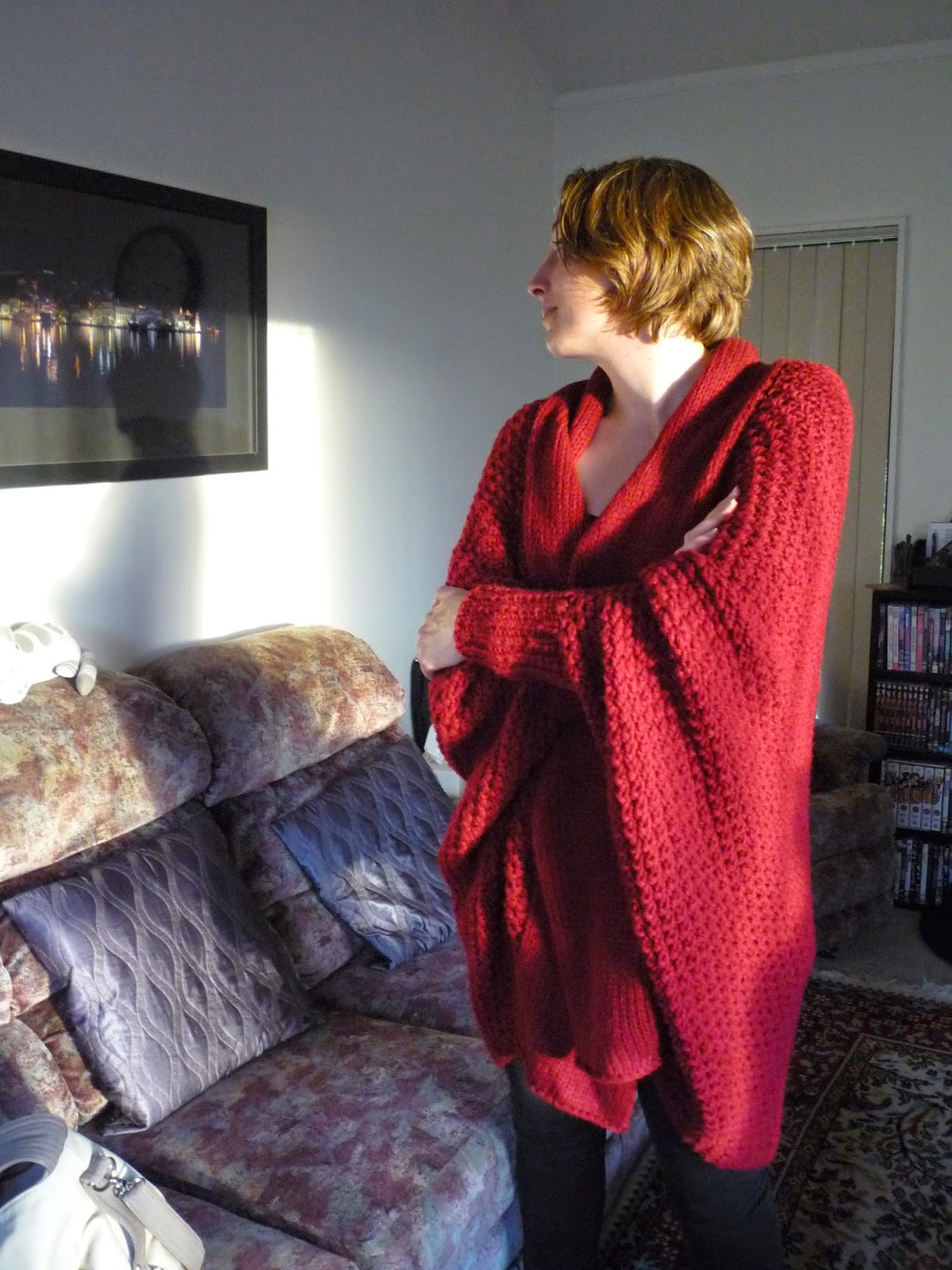 Rinda's jacket, or thingie, thick and warm .... acrylic.
Another one off the eternal list
and she immediately wore it on the plane to Wellington.
A hit! 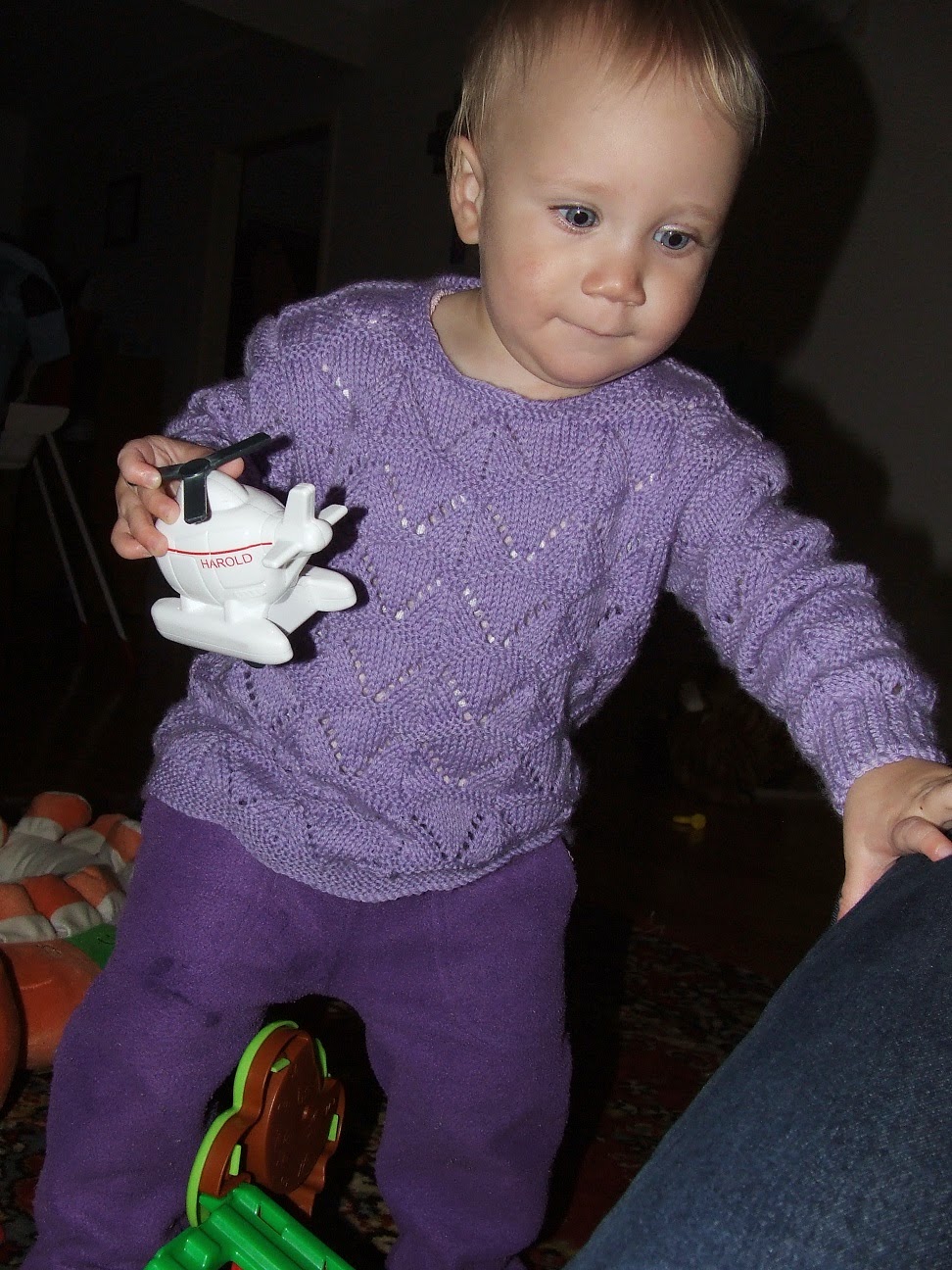 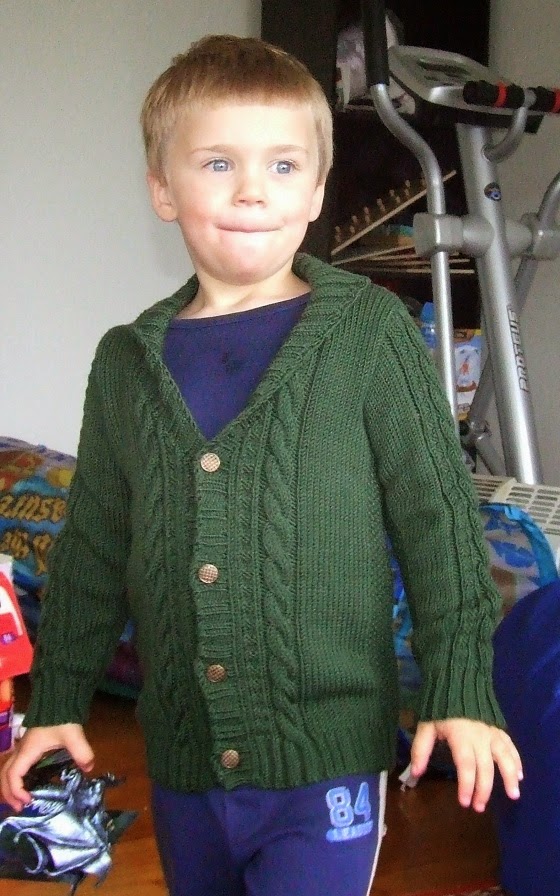 as does Jack's Grandad jacket both made longer than the patterns.
When Jack opened the parcel he informed me he doesn't wear green, only blue!
A 3.5 year old with confidence.  May it last.
Posted by Dianne at 4:56 PM 2 comments:

A couple of weeks ago Pete and I took a few days off to drive to Taupo Lake going down the west arm to Tukaano the first night. 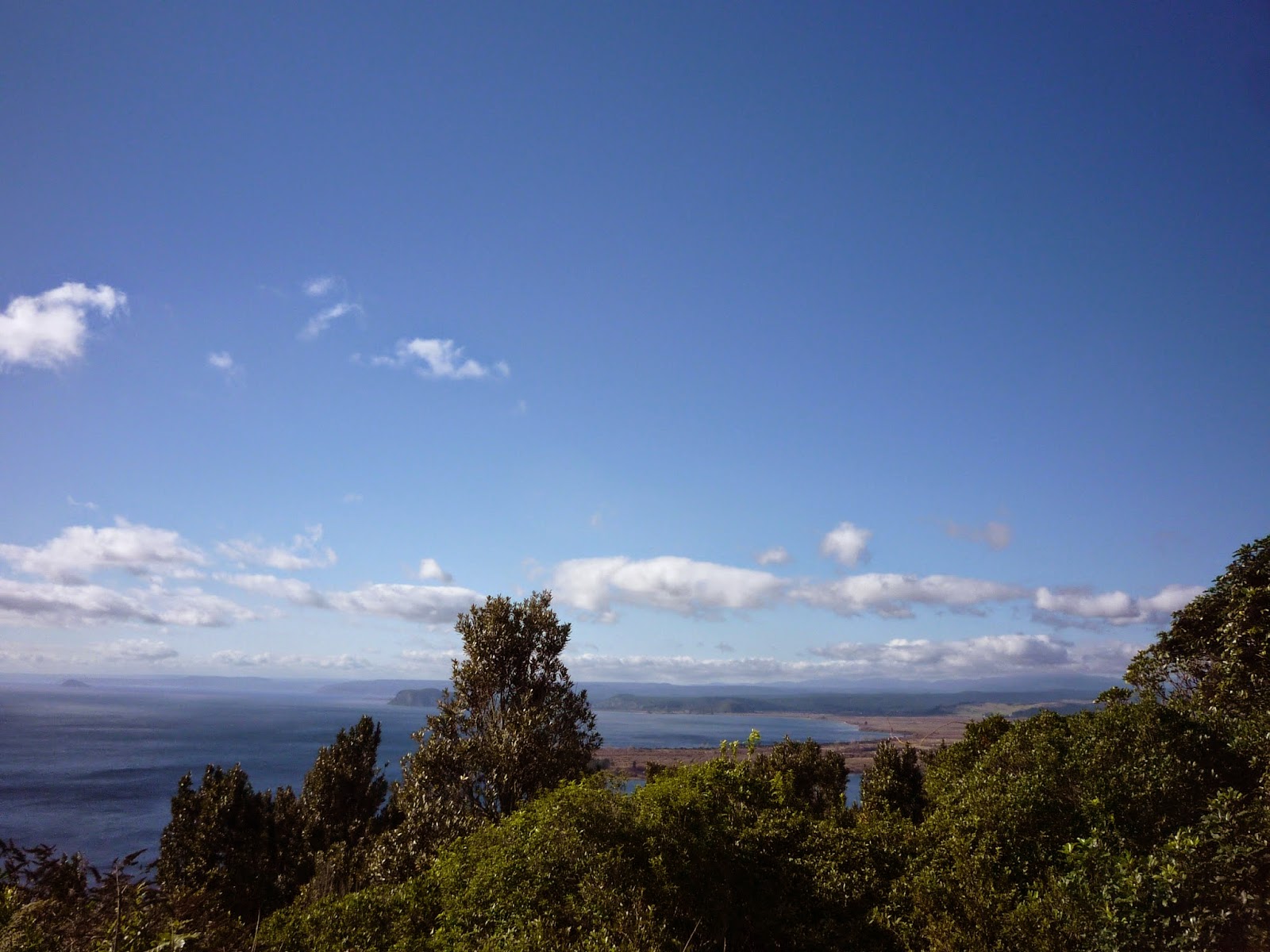 Lake Taupo from the south end. 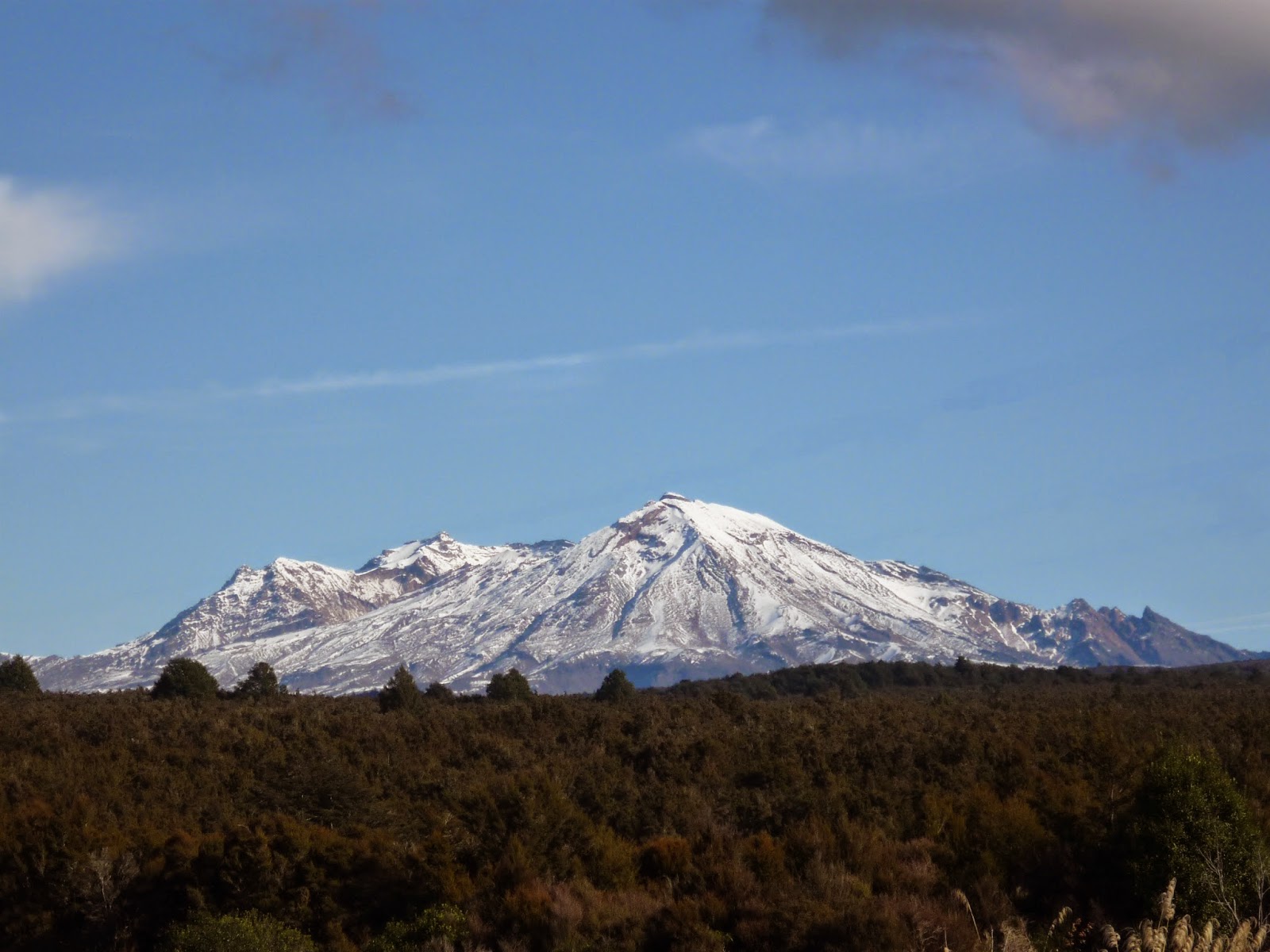 Doesn't Ruapehu look glorious.
As we left Tokaanu to head to Taupo we decided to see what the Pillars of Hercules to the south of the lake were.   I was reading the map and just as Pete finished passing a truck trailor unit I said turn left.  We missed that turn and decided it would be too embarrassing to pull over directly in front of the truck so we kept driving, by now a good way up Desert Road.  Our excuse to stop was me jumping out of the car with camera when we saw Ruapehu.  With face saved we could U-turn and head back to Pillars of Hercules.  Turns out one had to stand in the middle of a longish swing bridge and look down into a ravine to see the Pillars, neither thing of which I do so told Pete to take a photo.

While exploring Taupo we checked out the SPA Hotel.
What a sad sorry state of repair this wonderful piece of NZ history is in. 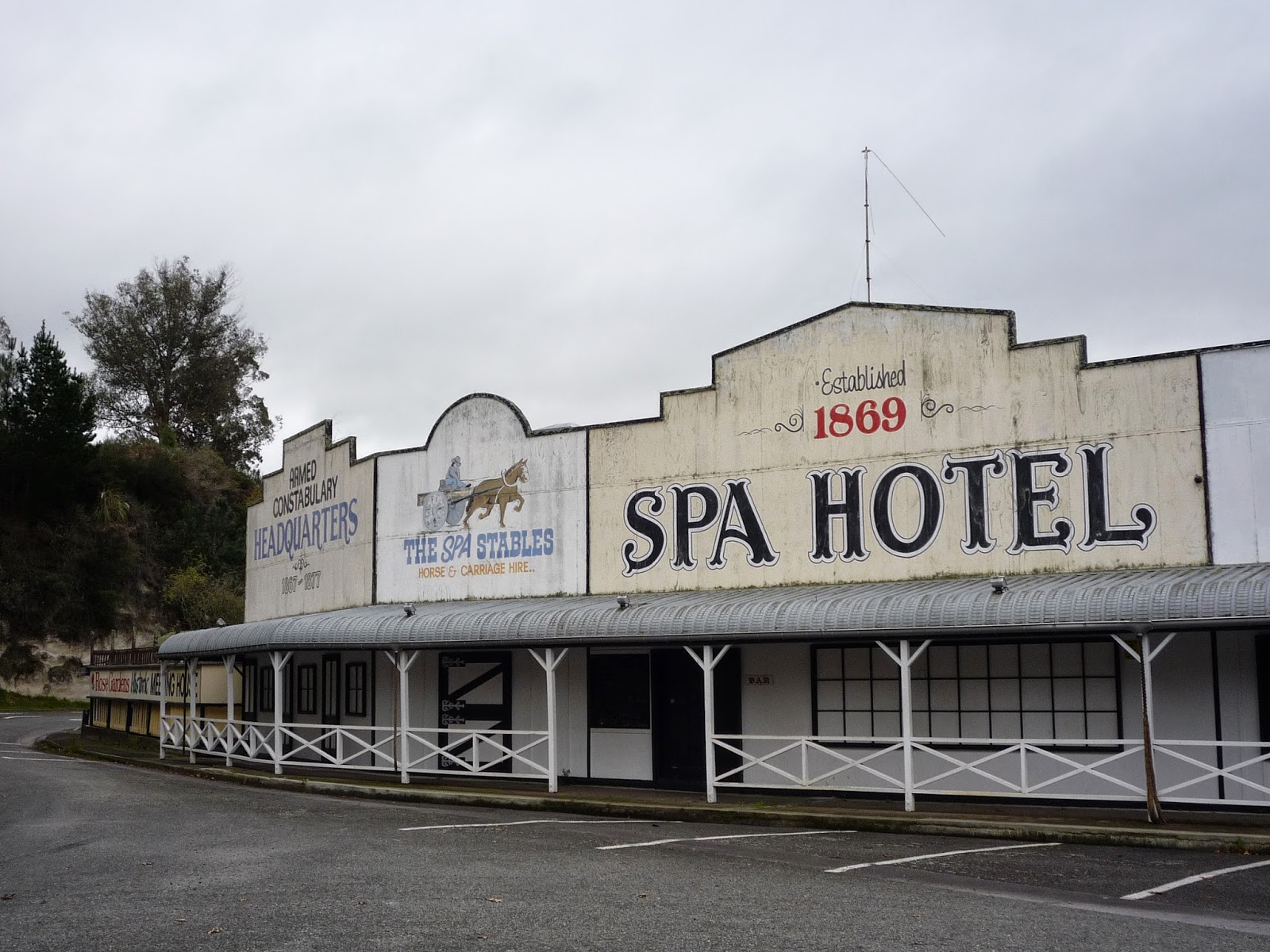 (Information from Stuff, February 2013)
"The hotel, one of the country's oldest, was established in 1869 by Edward Lofley.
He was a quartermaster in the armed constabulary which was involved in the hunt for guerrilla leader Te Kooti, whose repeated raids from the Ureweras were a constant threat to European settlement.
Lofley set up a depot for the troops where the hotel now stands - it had a constant supply of hot water for cooking and bathing and a place to corral their horses.
It was the start of what later became Lake Taupo Hot Baths and Sanatorium.
The 7.5-hectare property features a number of heritage buildings including a chapel dating back to the mid-1860s and cottages built in the late 19th century and early 20th."
I understand British soldiers wounded in the Maori wars were sent here to recuperate.  Each unit used to have a soldier's name plaque on it but they have all gone. 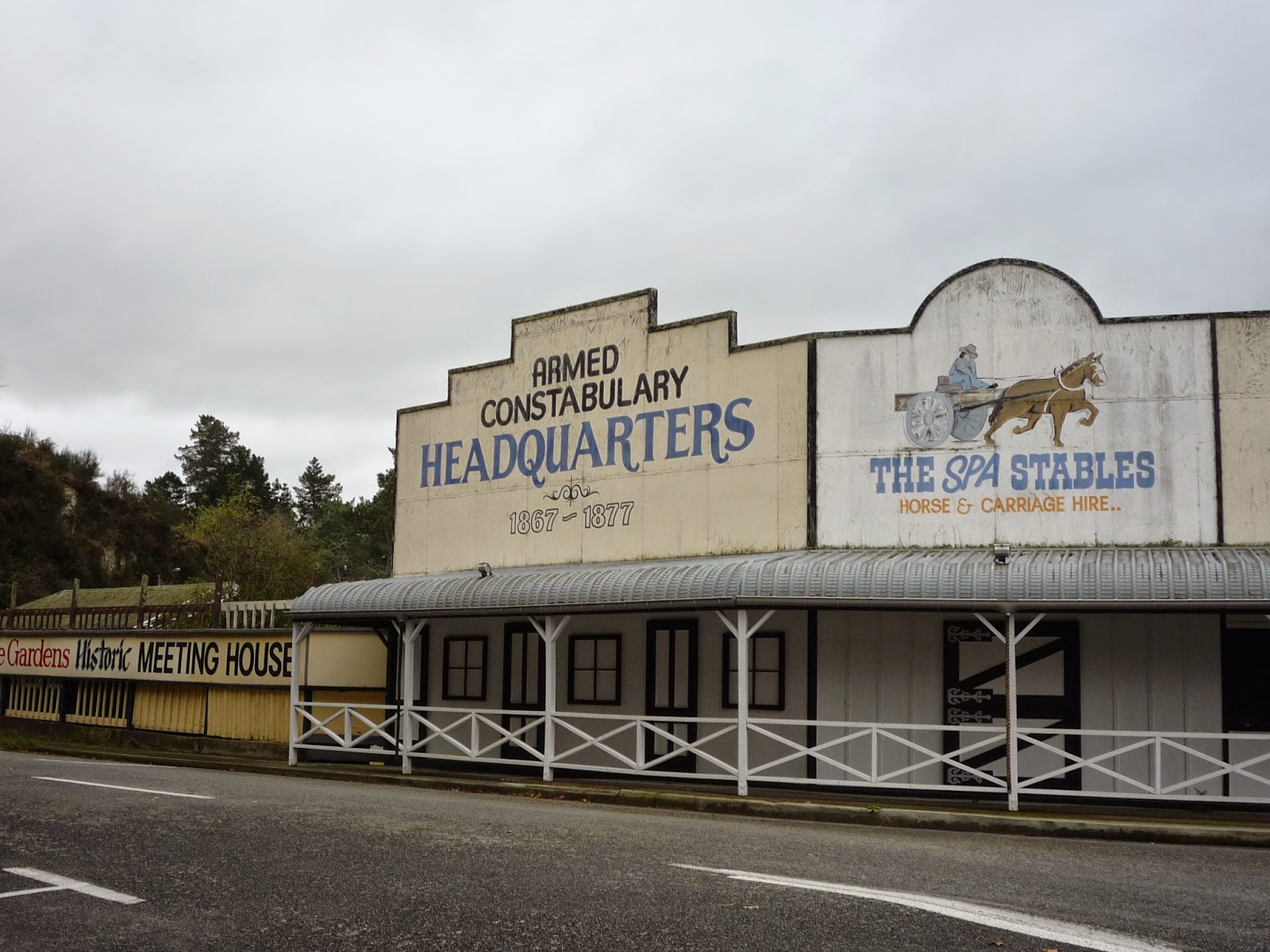 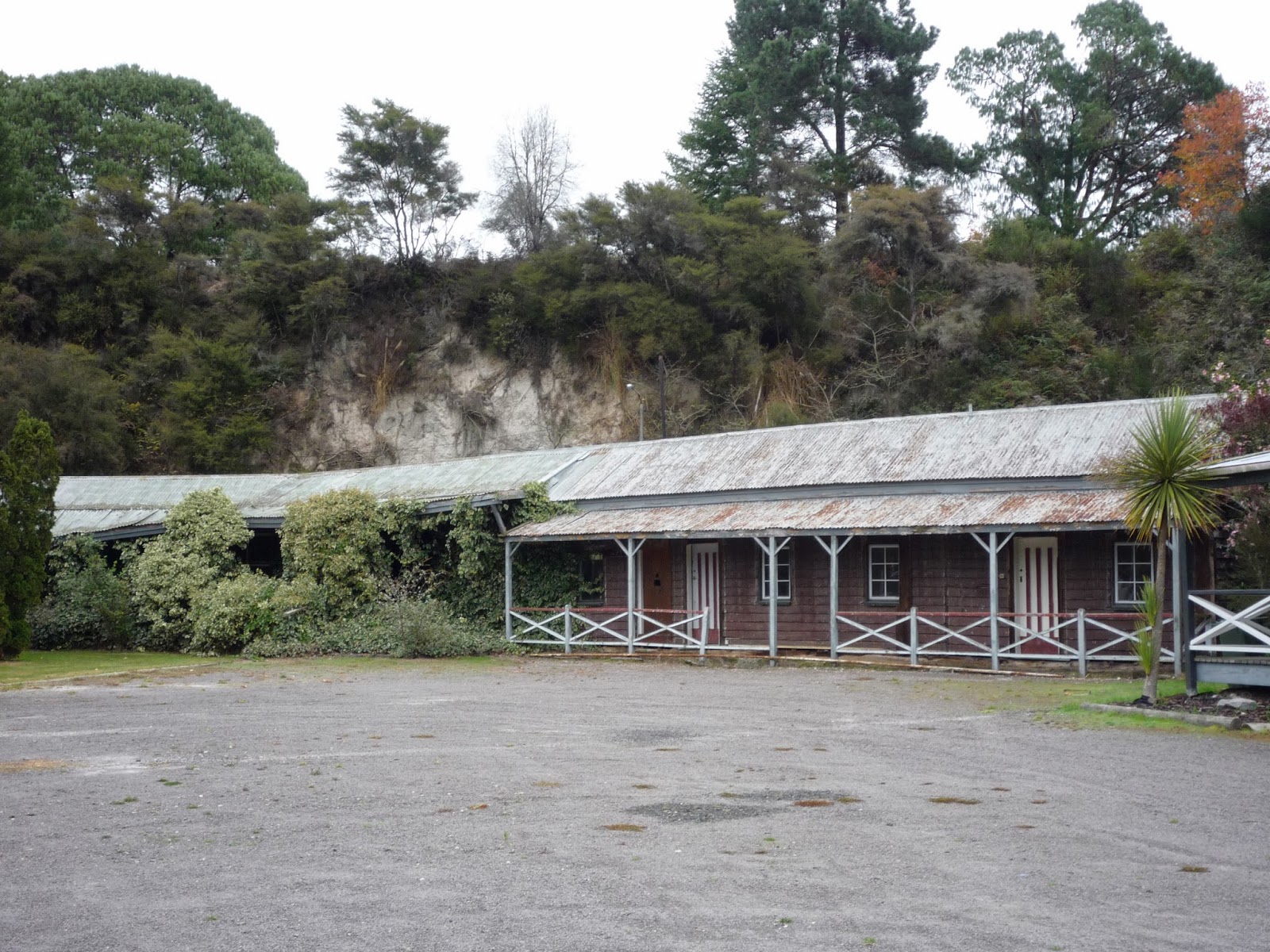 Look at that roof collapsing with vines and creepers growing over it.﻿ 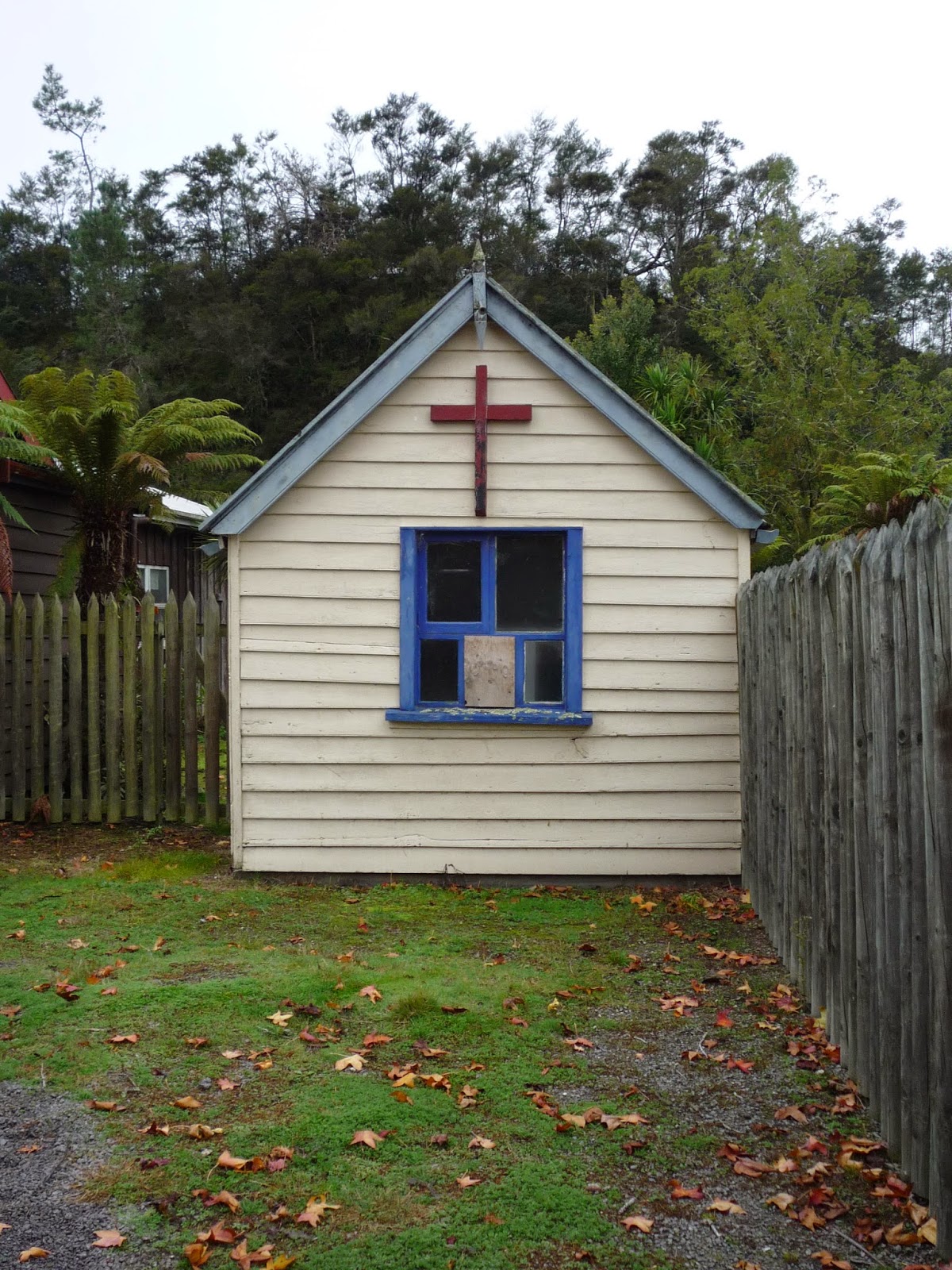 It was obvious some work had been happening around the buildings some time ago but cans of paint and drop cloths just left where they had been used.
Have to say I shed a tear at the neglect of this country's history.﻿
Posted by Dianne at 3:46 PM No comments:

Some of the scarves sent to Inspirit Gallery earlier this week in time for Field Days.
Woven in shadow weave based on a threading in "book of 8 shaft Patterns edited by Carol Strickler" but I used 16 shafts.  Woven in merino, cashmere, possum, silk at 20 epi.
(Pics should be clearer if you click on them.) 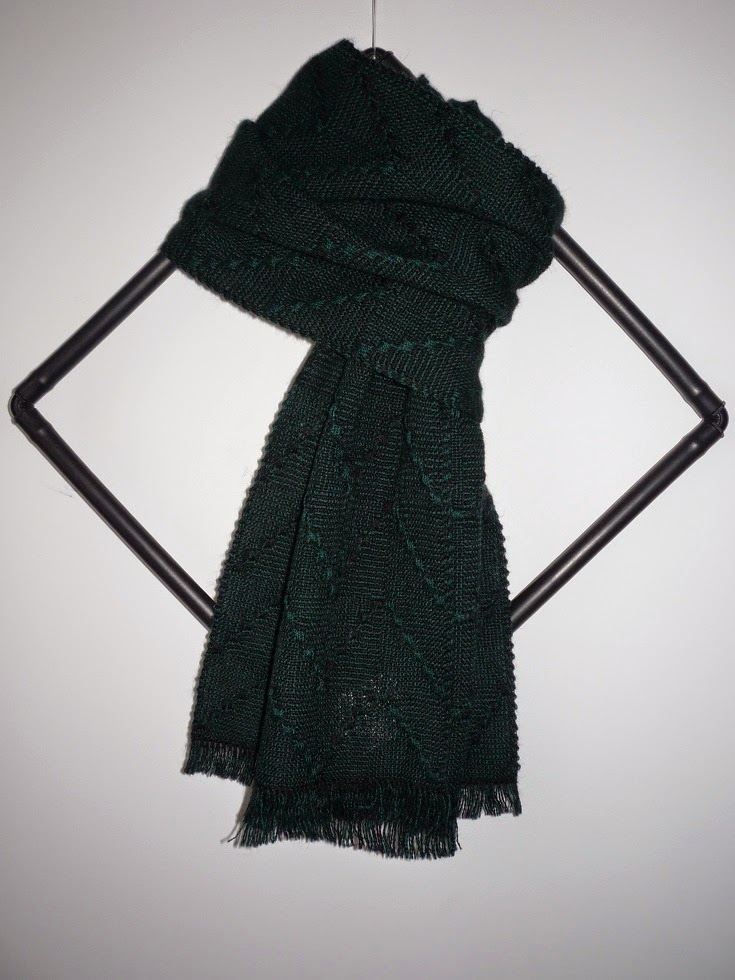 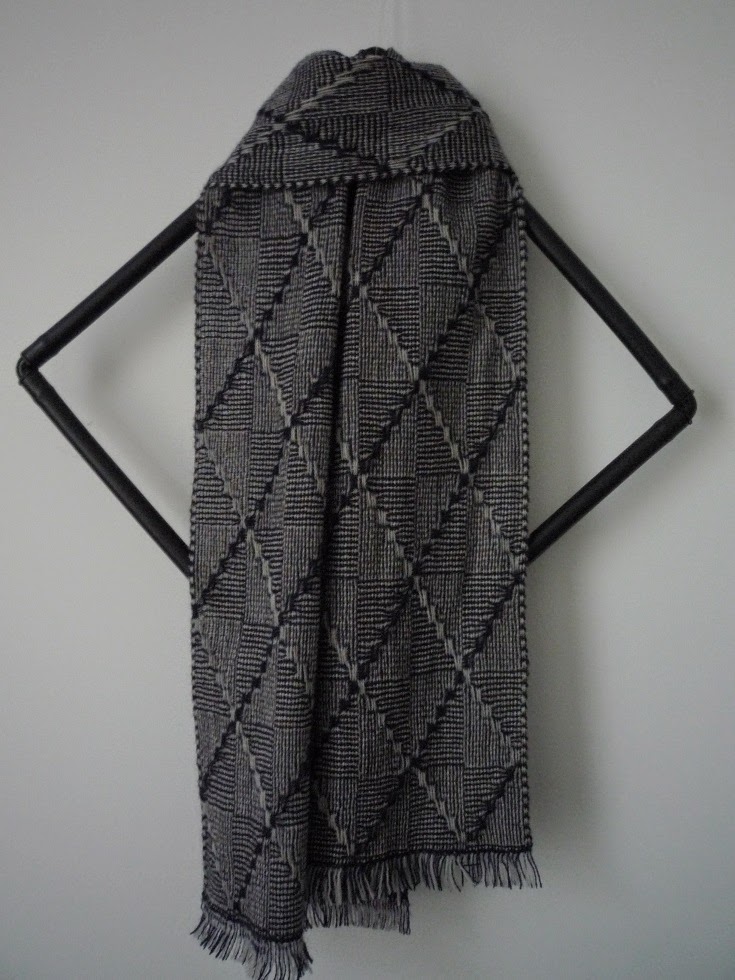 Navy and ecru was my favourite. 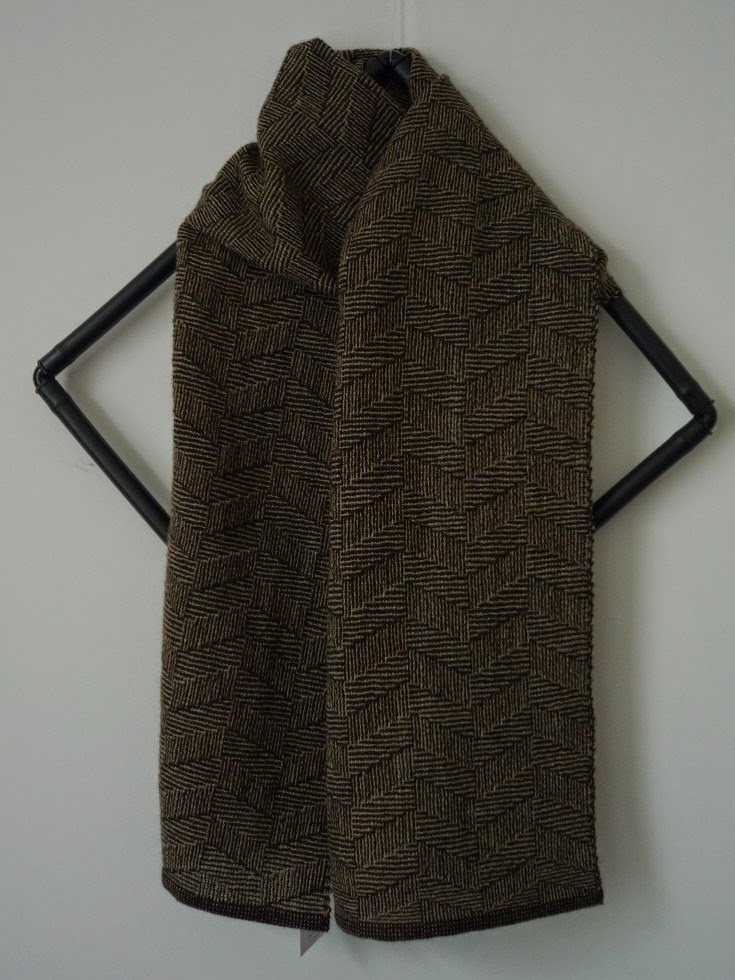 Brown and ecru.
For this one the brown is 2 ply but the ecru possum merino is a singles.  I wound them together on the warping reel, tied on to previous warp at the front of the reed and wound them through to the back beam.  Not a problem but if I'd stopped to think I might have realised that perhaps it wasn't the best choice for a warp thread.
Jenny at Inspirit Gallery is delighted with the design line.﻿
Posted by Dianne at 7:47 PM 4 comments:

Happy birthday Zoe dear.  At least I got your jumper finished for your special day even if it is still damp from wet finishing. 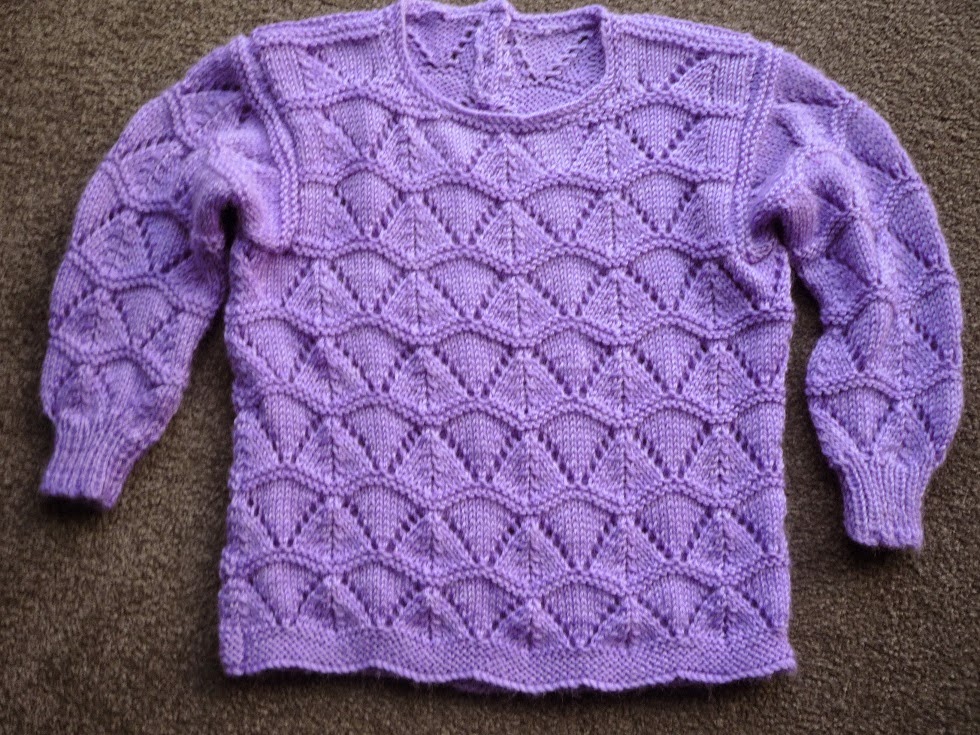 Really looking forward to seeing your gorgeous smile next week.
﻿
Posted by Dianne at 7:16 PM No comments: