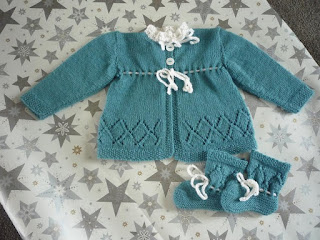 Just to include the knitting in this year's finished projects.  Set for Grand Bubby due end of April.
Posted by Dianne at 4:50 PM No comments:

We had a wonderful Christmas day with everyone arriving safely, despite the tail end of cyclone Evan skirting our shores with rain, wind and humidity. 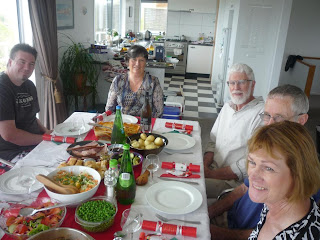 Now we see Aunty Rinnie with the real thing and Jack doing some coveting.  I think everyone enjoyed their haul gifts and now I'm off to study my copies of Complex Weavers Journal compilations 3 and 4.  Might take a while ... 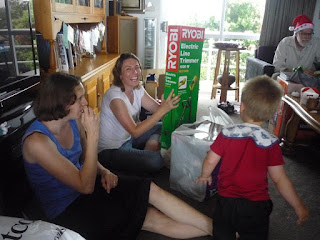 Posted by Dianne at 4:23 PM No comments: 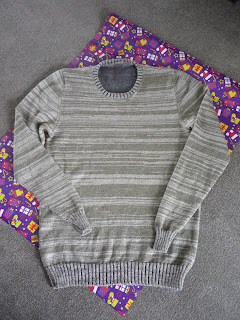 He wanted stripes, he got 'em.
Main yarn taupe and olive 110/2 tex threaded together, plated with darkish blue boucle the loops of which show through the stripes sort of blending it all.  Rib also plated with the dark blue.  Neck and armhole full fashion shaping.  Will find out on 25th if it fits.
Posted by Dianne at 11:30 AM 2 comments:

Well there hasn't been much weaving happening around here.  The star burst snowflake keeps beckoning but preparations for visitors take priority.  Today I made 6 times the recipe for muesli and fruit cake number two as the cookie monster seems to have been visiting.

We did have an unexpected trip to Auckland and were able to take in Jack's second birthday.  They certainly enjoyed the pool fishing for wee plastic fish and would have stayed there all afternoon but there were crafts to do, food to eat and presents to open.
And here's Aunty Rinnie coveting Jack's line trimmer.  The guys were very impressed with the lawn mower and the blinking lights.  I heard some scheming so if, in a few weeks, you chance to see a guy with a lawn mower with flashing lights stop and say Hi, I know your mother!. 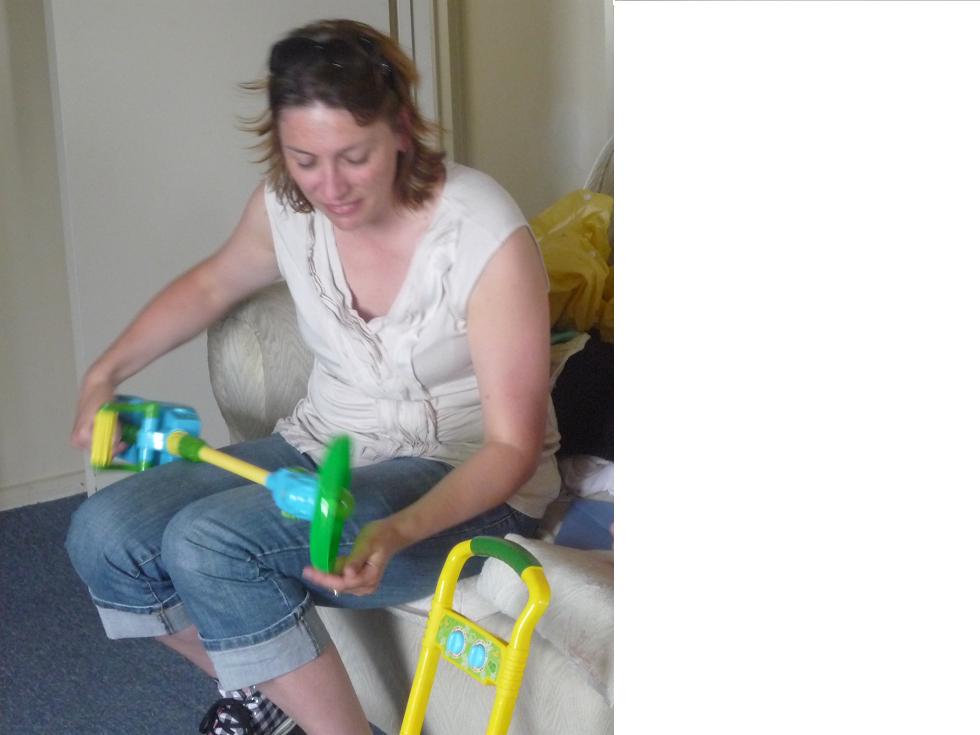 I did finish a jersey for Pete this afternoon.  Its been wet finished so no pic.  Its so long since I did anything big on the machine that the ribber needles have gone rusty.  One of the joys of living near the sea.
Posted by Dianne at 9:09 PM 1 comment:

Well, that's a fine how do you do!  When I drove to town yesterday to freight the Rata blankets I saw a flashing sign saying our water would be off for 6 (yes 6) hours today.  DH had seen the sign the day before but forgot to tell me.  Did we remember this morning?  No!  Its amazing how we take the supply of water for granted and what you can't do when its not available. 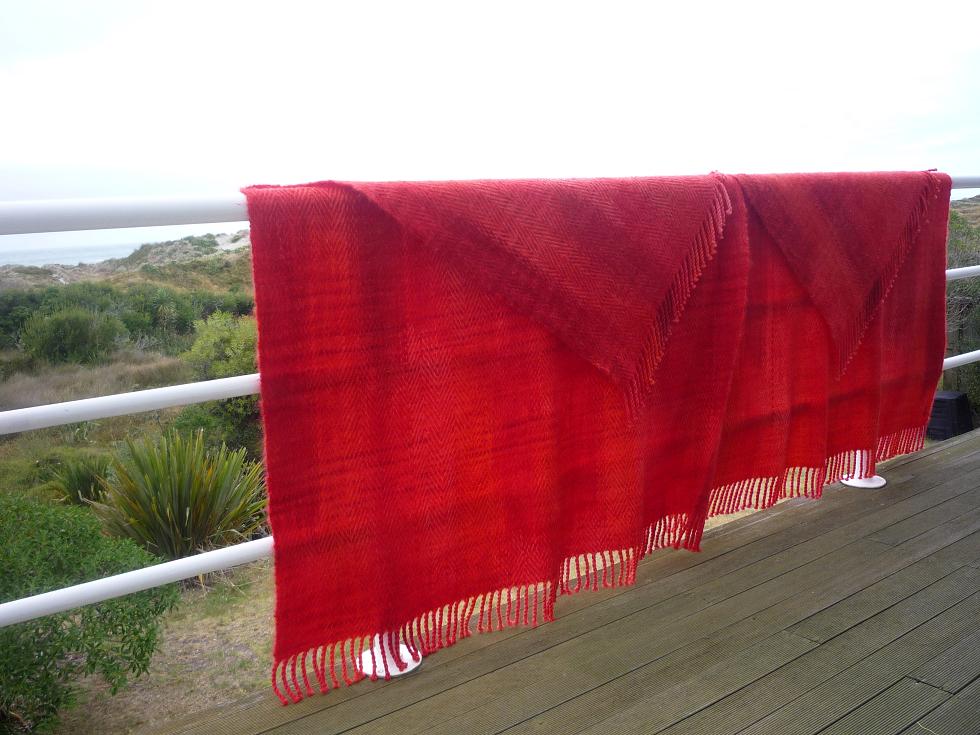 Rata blankets are done and on their way to Pauanesia shop so if you want one contact them through the link.
Photo taken on overcast, breezy day but you can see how dry the lawn is.  That's why I gave up gardening.

Information from Department of Conversation:
"Northern rata (Metrosideros robusta) usually begins life as an epiphyte or plant perched on a host tree. Its roots grow down to the ground, finally enclosing the host tree and producing a huge tree up to 25 metres high with a trunk of 2.5 metres through. It is found throughout the North Island and in the South Island, south to about Westport.
Southern rata (Metrosideros umbellata) grows from a seed in the ground to become a tree up to 15 metres high with a trunk 1 metre through. It is found from sea level to 760 metres and distributed from Whangarei south to Stewart Island, although it is rare in the North Island."

Now I'm going to stick myself to the knitting machine 'cause DH fine merino jumper has become dinner for some creature, probably moth but maybe carpet beetle.  Either way, with so much wool in this house, its a worry.  Hopefully a new jumper will be under the tree by the 25th.
Posted by Dianne at 11:51 AM No comments:

This crazy time of year celebrated the world over in one way or another.  Different strokes for different folks!

When our children were little we owned a motor camp for 15 years so Christmas Day was just another working day; still had the toilets and showers to clean, ice creams or baked beans to sell.  People demanding attention.  I remember one year I put a notice on the office door saying back in 30 minutes - having Christmas with my children.  Well when I went back to the office there were 20 people lined up outside.  They couldn't even give me a break on Christmas day so after that it was forget it, just work.  I asked my kids (they're in their 30's) not long ago if they felt deprived by us having to work every holiday and not having attention from us as other kids did.  Oh no Mum, ice creams and moro bars made a good substitute.  My daughter still puts quality controller on her CV.

As the kids got older and had partners and now spouses we were quite happy to take year about with the partners family so long as we saw them sometime within a couple of weeks of Christmas.  Since son and d.i.l. married it has been great to join her family on the alternate years.

Anyway this is my year.  8 adults and a 2 year old for Christmas.  The trees are up, had friends for dinner last night and a trial run of the meal works well, just double everything.  I new where the red and green fabrics are to making bunting and decorations to get in the mood.  Then DH decided it was time to rearrange and paint the office.  Everything has been moved into stair landing, dining area.  To give him his due he is getting on with the job and should be finished by "the Day" but it kind of takes the shine off planning.

Not that I don't have lots to do. 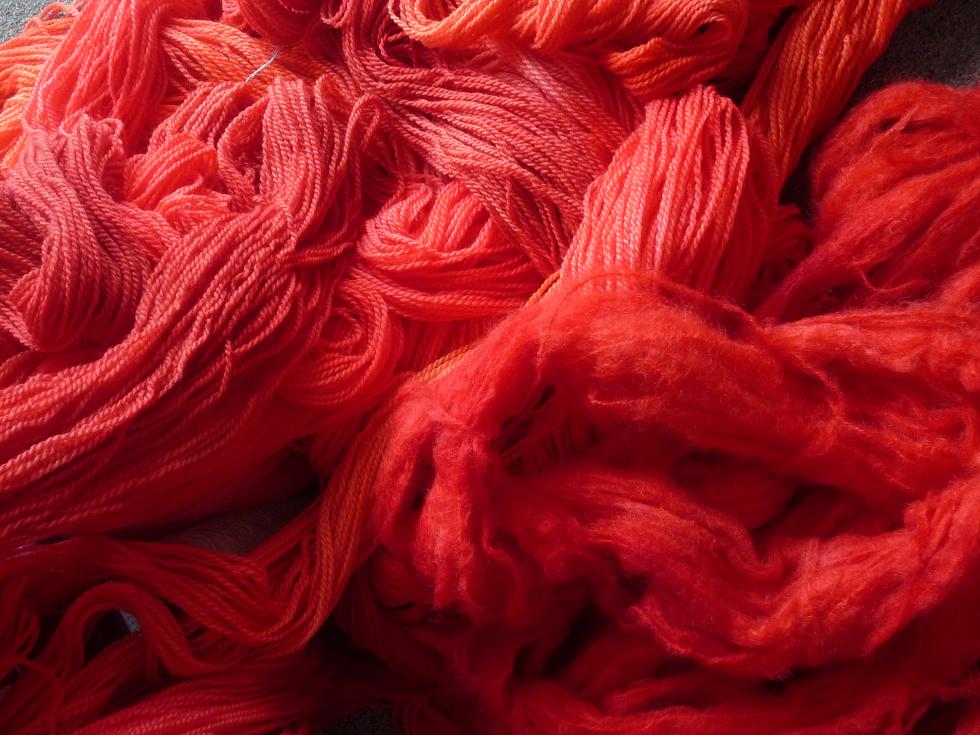 Rata blankets are progressing and need to be finished as soon as possible.  It is the height of the tourist season as well.

I'm Treasurer of a weaving group and someone in their wisdom decided the end of the financial year would be 30 November so I have to have a set of accounts done before "the Day" for accountant daughter to sign off.  And there are two birthdays close to "the Day" but because everyone will be coming here for Christmas we decided not to go to Auckland for grandson's second birthday. 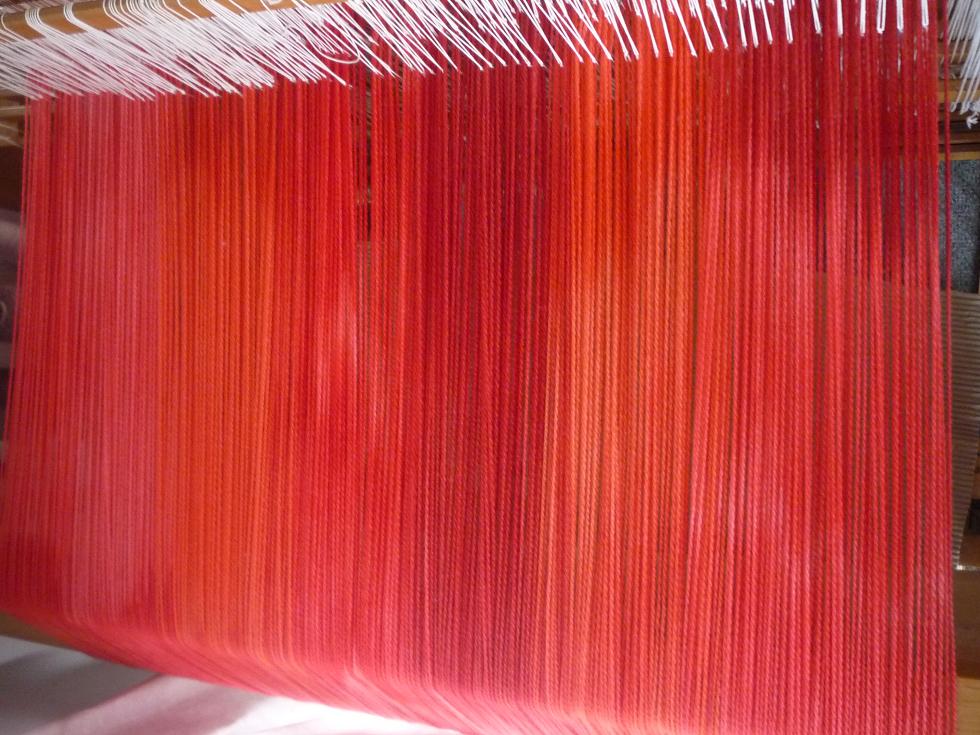 Red mohair awaits, I better get to it.

PS The snowflake warp is still waiting attention but don't dare use white cotton while red mohair fluff is flying around.

While I was preparing for the exhibition "Japonisme" I had to stay really focussed on the sewing but I did dangle a carrot in the "I want" part of my mind.  I was going to weave the most amazing place mats anyone had done, weave the finest linen lace pillow cases ever, the most colourful rep weave table runners, etc.  Finished the exhibition and ... zilch.  Apart from four runs of blankets (i.e. 8 blankets) which, once I've dyed the yarns, I can weave on auto pilot, I have just waffled.

Until this post by Susan when something spoke to me.  Now I have collected every article I could find on Snowflakes; Weavers 13, 18, 20, 30 and the hearts in Spring 1997.  Twill is my first love of weave structures ever since Bonnie Inouye's visit down under in 2002 and she presented "The Big Twill" which included a draft for Snowflake.  Now was its time.  After much fiddling with Fibreworks PCW I finally decided to just get on with it and try something so threaded for a slightly modified version of the Starburst threading, issue 13.  (There is a correction which appeared in issue 15 of Weavers.)  I have to say its wonderful to be able to use the computer program to tell me which shaft to thread on a draft such as this.

And I sampled.  Same honey 16/2 cotton weft, a natural slub cotton weft which shrank and looked dirty and white mercerised 16/2 cotton weft.  Now I've been dithering for days which weft to use.  The little bit between the navy blue threads was trying a networked twill on the starburst threading. 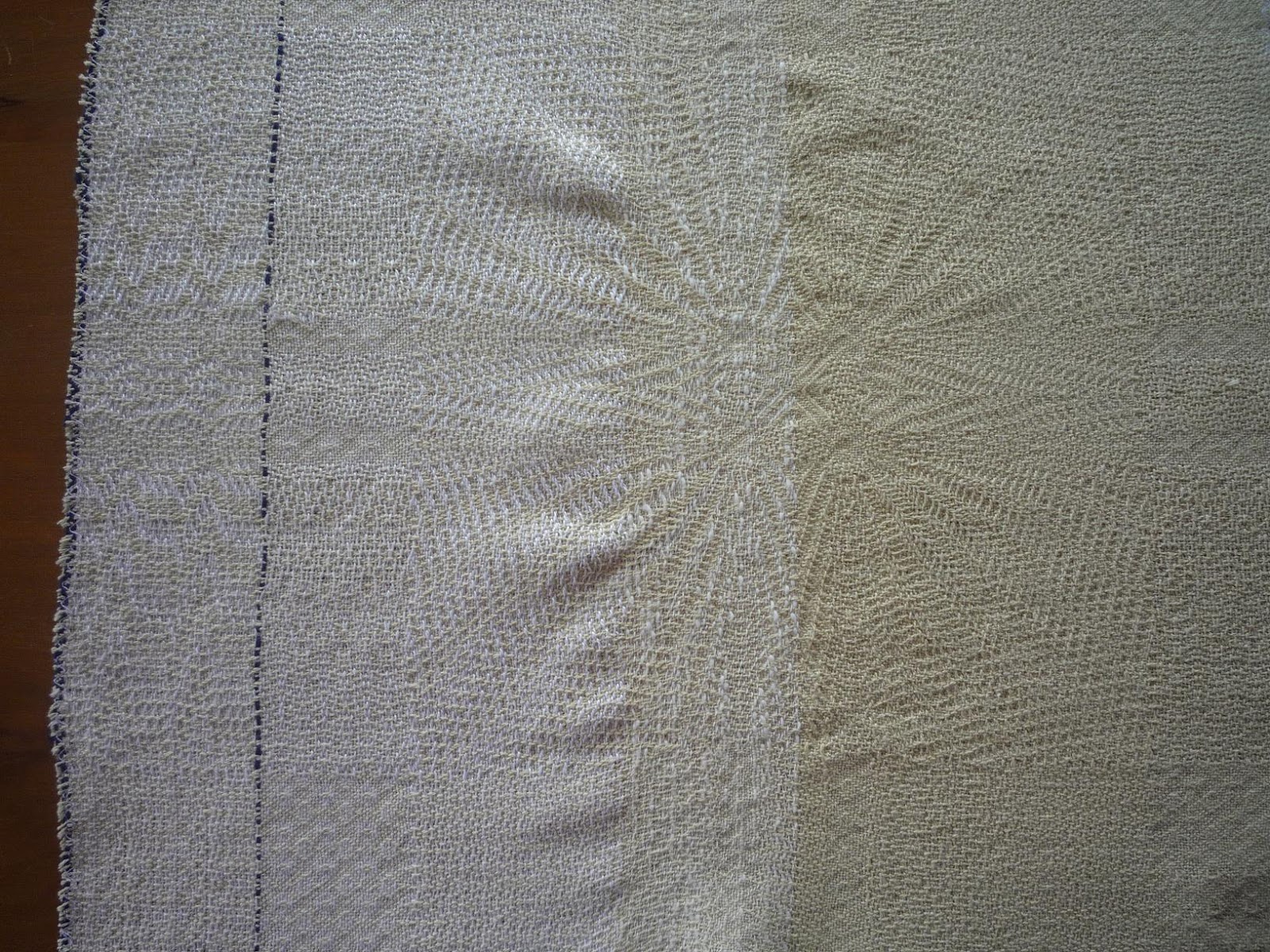 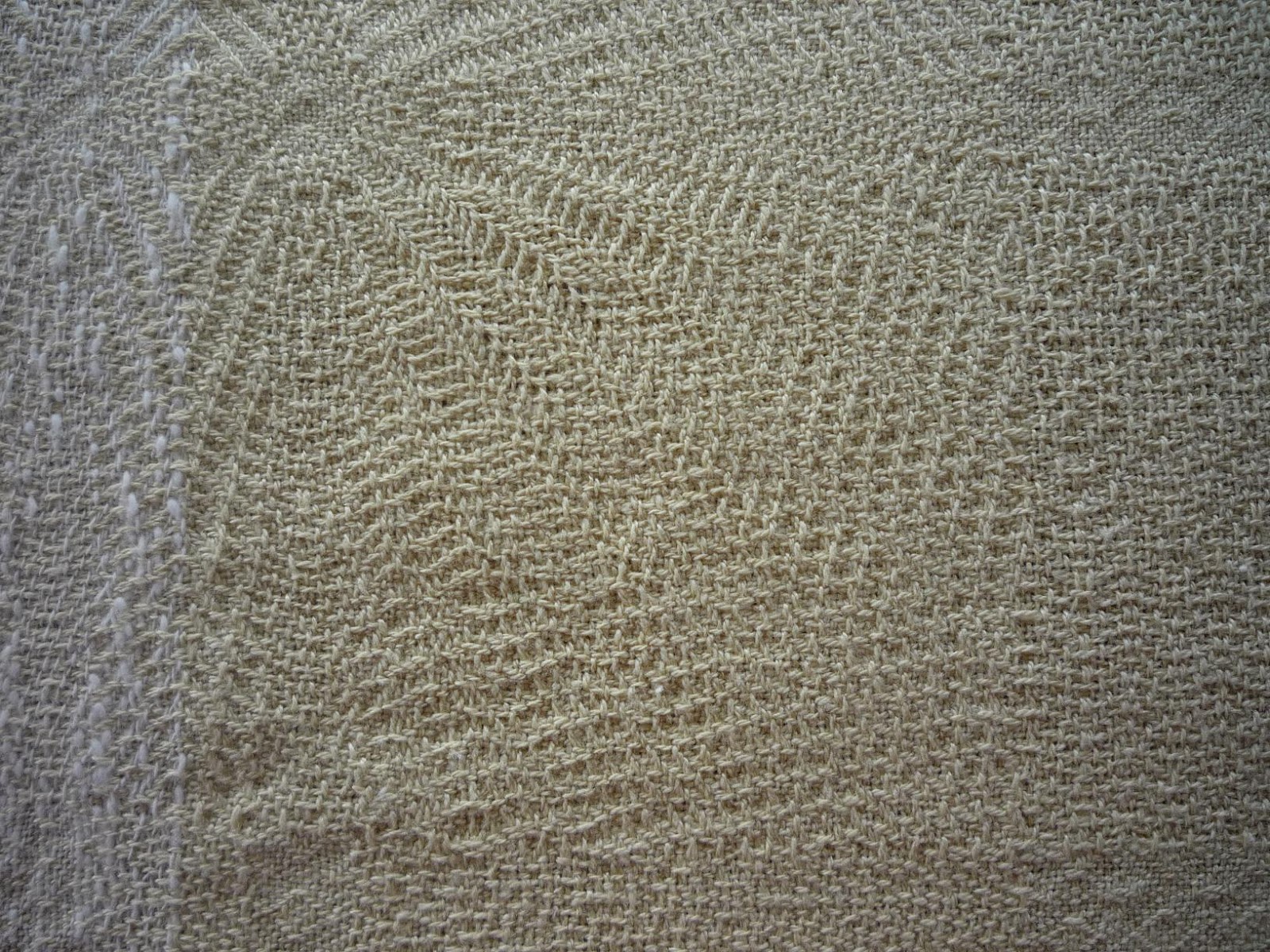 whereas the white has a bit more body and a sheen.  It also shows up the wee diamonds in the bottom right hand corner of this pic. 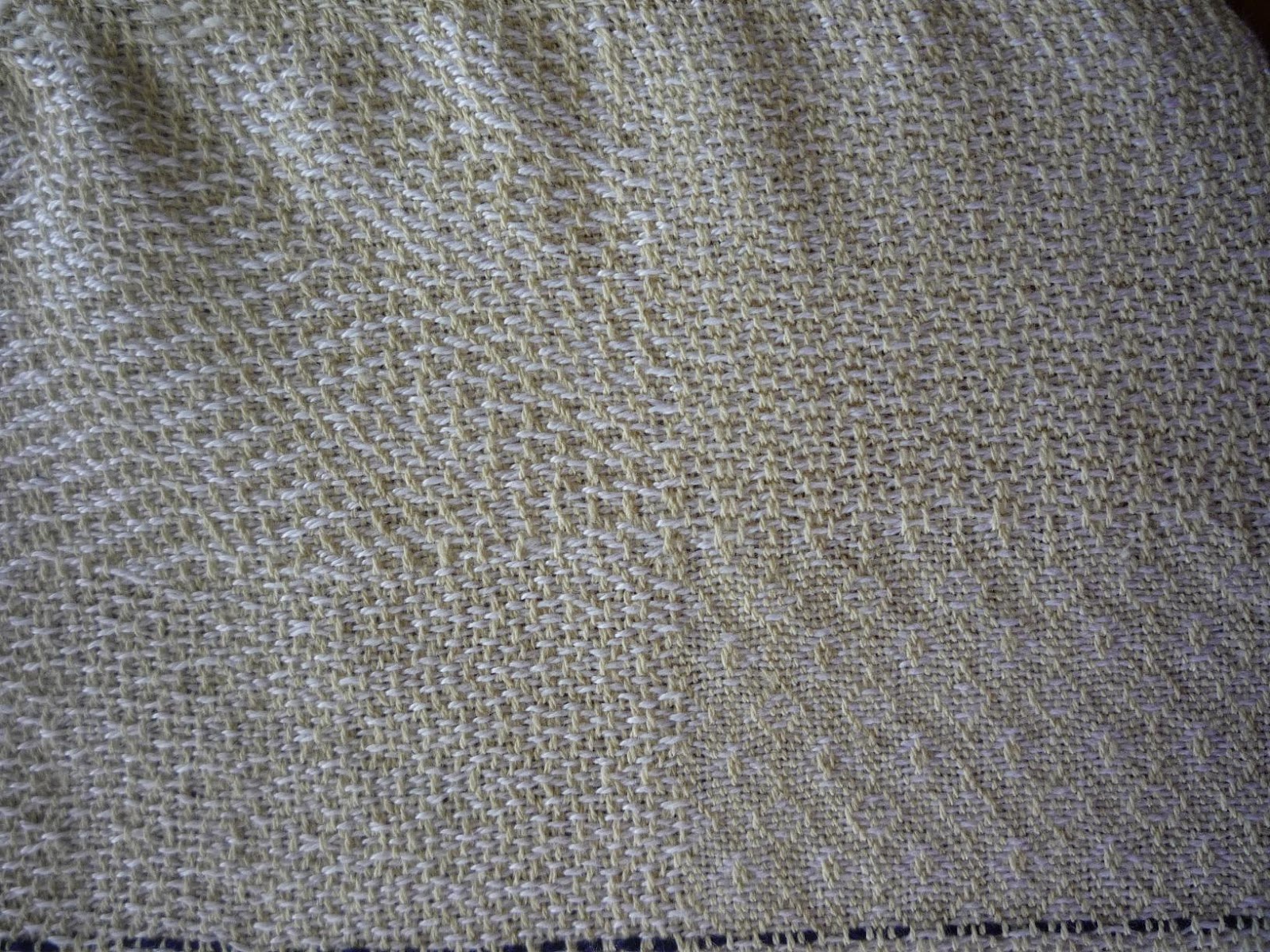 In the meantime I've been working on another run of blankets, Rata this time, for Pauanesia.  Brilliant Christmas red.  I can't work on them at night as the red keeps me awake! 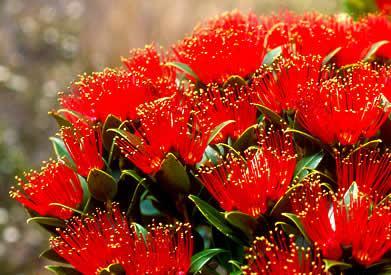 Now here's a strange thought.  Does any one else have to lean in the window at the back of their loom to tie the new warp to the back apron?  Guess not!  I wouldn't dare try to move the loom now, so when needs must ...

Posted by Dianne at 5:07 PM No comments: