Shed a tear with me!
Look at that wrinkly edge! 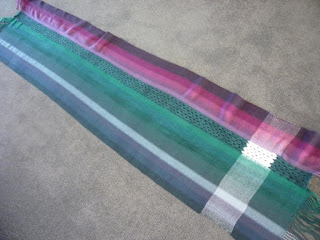 What happened was that the knit panel wouldn't felt (I didn't check but the threads are descaled.) so I kept rubbing to no avail BUT the pink yarn next to the knit panel did felt.  And this looked so wonderful when it came off the loom, even DH commented on its success.
It doesn't look bad when draped to wear but I certainly can't put it in the exhibition it was intended for. 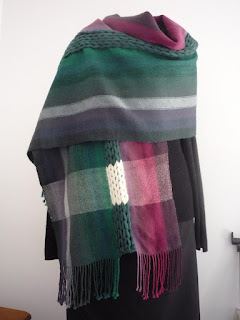 Look at the two pink tassels by the green knit stitches; see how short they are.

Is there a code or something that manufacturers have to put on wool labels to say it has been descaled?  I've been caught out too many times.
Posted by Dianne at 3:27 PM 4 comments:

In simple terms diversified plain weave has a thick thread forming the pattern and a fine thread providing a plain or tabby background and tying the thick threads down.  Conventionally it is threaded 232,141,252 etc with shafts 1 and 2 being the tie threads and 3, 4, 5 etc being the thick pattern thread - usually about 4 or 5 times thicker than the ties.  A new way to thread is 123, 124, 125 etc which I haven't tried.  Weaving uses two shuttles and again two pics of fine thread weaving plain to one pic of the thick pattern thread.

How did I create the drawdown?  That's a bit of a mystery but first I googled and came up with a few sites and Handwoven magazine has had various articles in recent times on diversified plain weave (DPW).


My inspiration was this paper which my daughter brought home from Japan and was used on many greeting cards she sent me.  (Sorry about the photo, I spent way too long trying to crop it to no avail.) 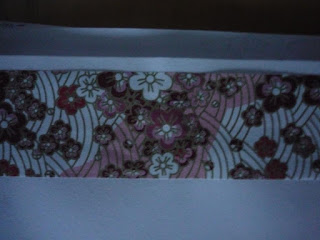 I planned to weave on my 16 shaft compu dobby and, as two shafts are used for plain tie downs I had 14 shafts to play with pattern.  I thought a point threading gave me the most option for size and positioning of motif. I then drew a square the size of 14 wee squares of my graph paper and sketched out a cherry blossom. 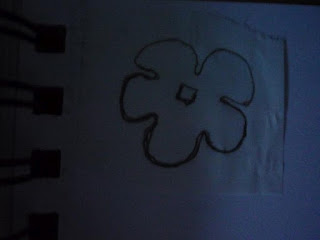 I then transferred this back to the graph paper and filled in all the wee squares where they were intersected.  I seemed to be able to see the petals better on plain paper to start.  Then I went to Fiberworks PCW software and transferred the information from the graph paper to the screen.  Because I use a compudobby I can extend the shafts to the full 64 and place "cherries" where I want.  Then convert the whole thing to "lift plan mode" and add the two tabby rows between each pattern row.  Even then there was a lot of fiddling to get a clearer image, not so easy with just 14 shafts to play with.  The waves were done much the same way but with even more fiddling.  I know there is a way to lay one draft over the other and I might try that soon.
Posted by Dianne at 8:33 PM No comments:

Oh dear, time is flying by.  I've had a trip away to Auckland to see family and friends and very enjoyable it was too.  18 month old grandson is a treasure but I was totally ignored once his Grandad showed him his image on the camera and which button to press to get it back.  He was very gentle and asked with his eyes before pushing.

I came down to the studio armed with camera some days ago to post but discovered the latest issue of Entangled magazine was out and no guesses as to who won.  Each article I've read so far has been interesting.  Of particular fun is an article by Stella Lange about workbooks and journalling.  She quotes Leoni Schmidt as saying her journal is "a cupboard for her mind" where she can store ideas and thoughts.  It might make me more enthused about my workbook if I can smile each time I remember the quote.

Now to the crappy news.  I hurt my shoulder some time ago and thought a pulled muscle would mend with time but it didn't so the doctor sent me for an ultrasound xray and the ligaments are torn.  I won't know if its torn from the bone or torn apart till I see the doc later this week.   The xray technician was enthusiastically looking at the other shoulder for comparison till I explained it had been injured about 12 years ago.  She wonder why they looked the same.  Its sure slowing me down - I could throw the shuttle with the injured arm but not beat so all beating was done with the left arm.

Another diversified plain weave pattern.  I love these shuttles from Mecchia's, so light and zippy but if I wanted to remove a bobbin that was partly full I couldn't get my fingers in to lift it so ... 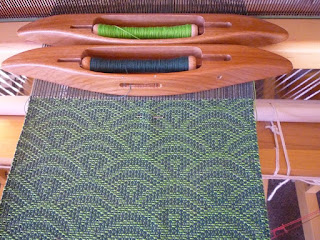 I found an old cup hook and made sure it worked before asking Pete to put a handle on it.  Its not the most elegant of craftsmanship but it works. 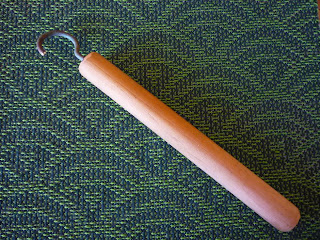 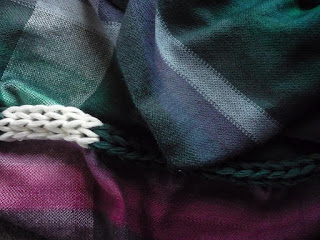 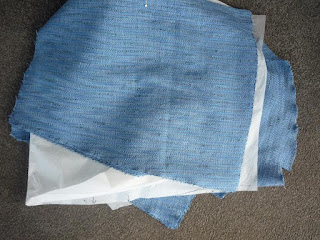 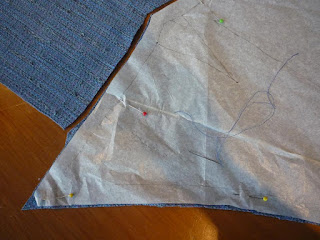 Ooops, the fabric wasn't wide enough for the bodice.  But needle and thread (and Daryl Lancaster) to the rescue. 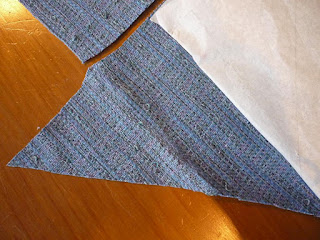 I didn't get the hang of the join to start with (see bottom right of join) but when its done properly its hardly visible, in fact I had to use the embroidery magnifying glass to do the job.  And then I realised that most of it will be covered by an outside facing and seam. 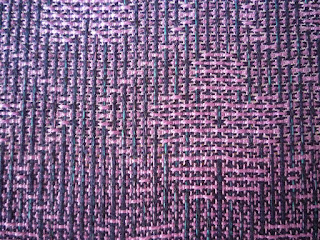 And finally, a close up of the fulled diversified plain weave.  I studied the pictures in the latest Handwoven magazine and I'm happy with this.

And now I really have to get on to finishing some of these projects and I'll be away for the weekend.
Posted by Dianne at 5:29 PM No comments:

What's in the knitting bag!

Its official ... you cannot weave with a hot water bottle on your lap.  Its been so cold this last week that everything has slowed down while the body struggles to cope.  Mind you cold for Bay of Plenty is not the same as cold for Twizzel -minus 11 degrees C, brrr. 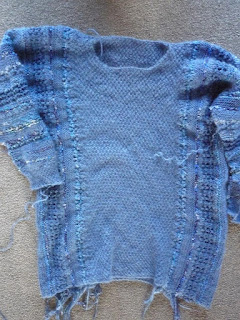 Jumper for me, so near finished but I think the sleeves are rather short, more work required there. 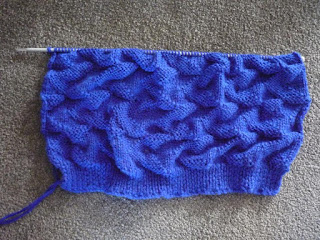 Jumper for Jack, 1 and 1/2 year old grandson.  He might be a bit older before he gets this and maybe a cardi would be easier to get on a little chap who can't stay still for two seconds. 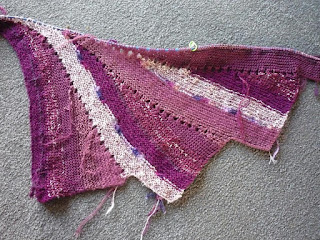 A Wingspan wrap to use up bits and pieces, all cotton or acrylic.  Now the person its being made for will know its for her!  Can't even see a dent in the stash.  At the beginning and end of each colour change I have two ends to deal with which I was dreading but I've had a bright idea.  Make a feature of them.  Not sure how yet.  I could plait them, crochet them, crochet and loop back into the fabric.  Wish I'd left them longer and it would have used up more yarn. 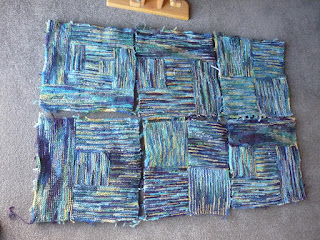 The blanket squares for Christchurch are multiplying.  Every time we wake to a frost I feel so bad for them down south I knit like mad.  For those who don't know Christchurch, the largest city in the South Island was struck by several devastating earthquakes last year and many folks are living in cold substandard accommodation.
Posted by Dianne at 4:58 PM 1 comment: