Tying on a new warp

I thought I'd show a photo journal of tying a new warp on to an old one.  Many times I hear weavers say they tried and its too slow.  It will be slow the first few times but like anything you get faster with practice.  Another cry is how awful to pull your threads through all those heddles.  Well I've done it with merino, mohair, even singles cashmere and put white paper underneath the heddles to catch any fibre fall - none.  What I have noticed is the strain on the threads in the heddles when a shed is opened whilst weaving.  Every time you open a shed the threads are strained even if only slightly.  Today I realised how often the shuttle passes over the threads on the shuttle race.  My brain couldn't work out the average number of passes but its lots, especially without an automatic advance.

This is my way of tying on a new warp, it works for me.
So before I cut off my woven cloth I put two rows of tabby of contrasting colour in the warp near the reed, that is, a cross. 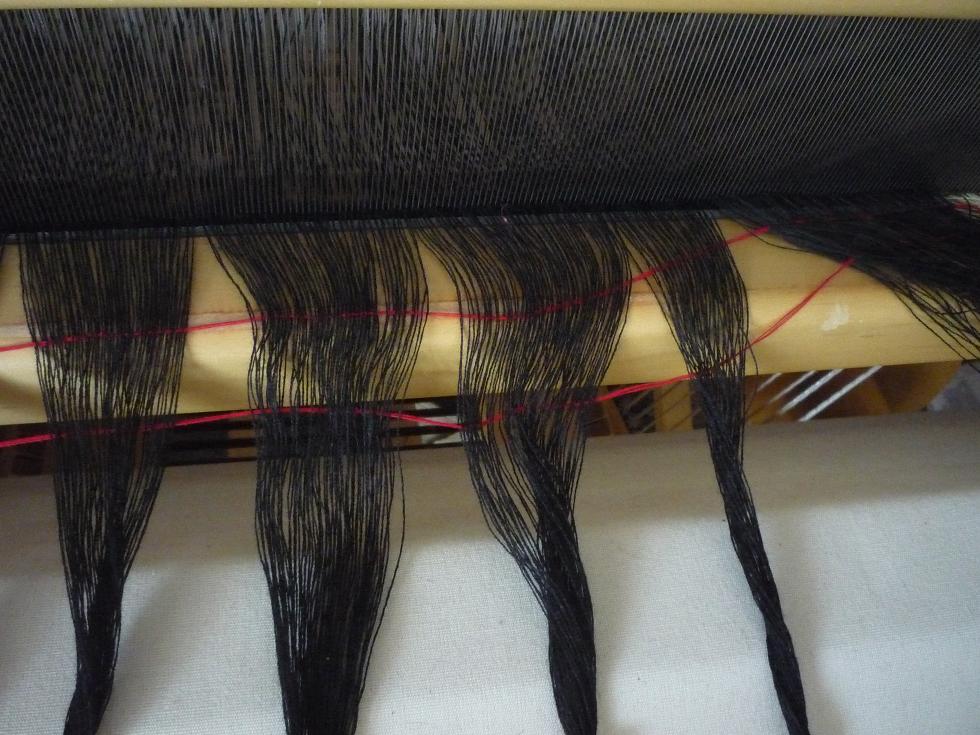 I do the same with the new warp, I secure the cross with contrasting thread.  I find this easier to work with than leash sticks. 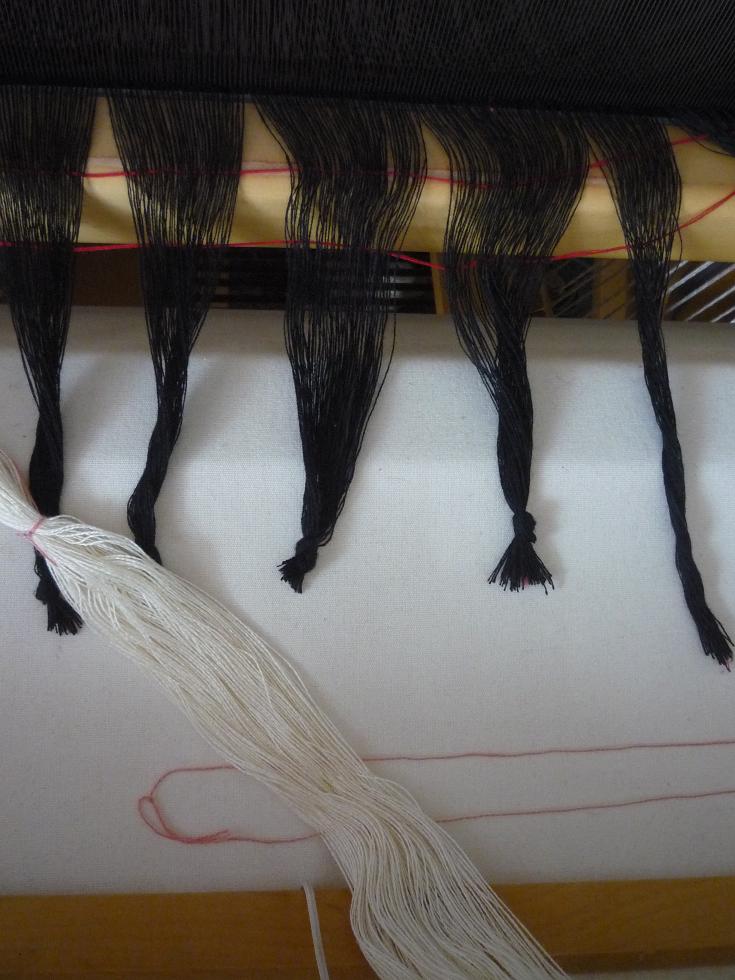 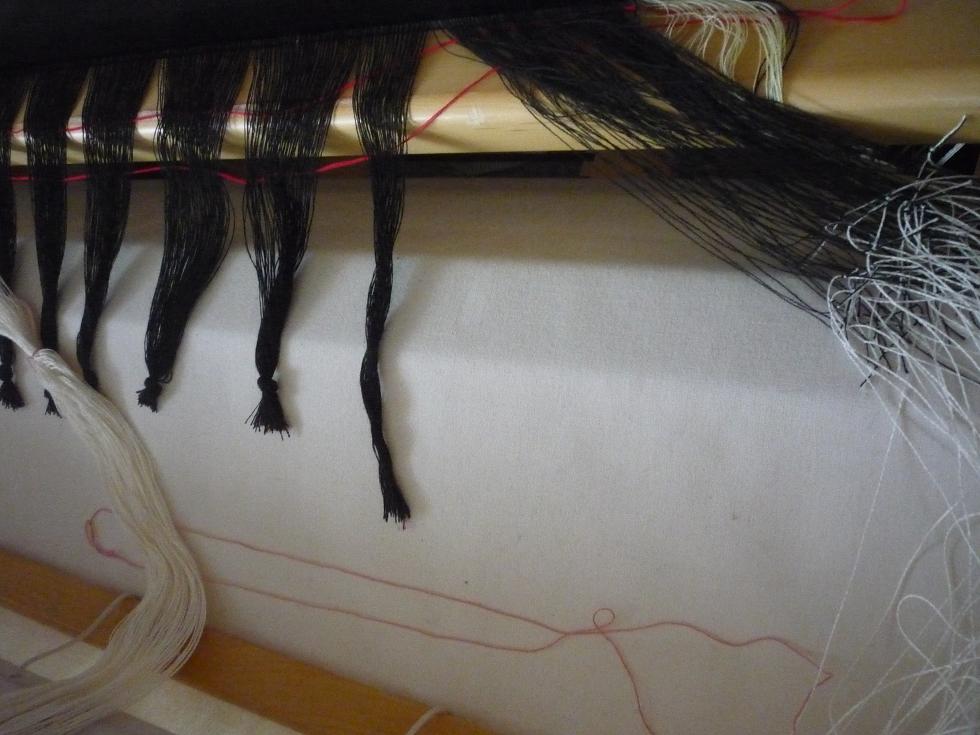 One can see when the wrong thread has been picked up as the cross threads twist over themselves.  If they aren't sliding smoothly along the cross some thing's wrong. 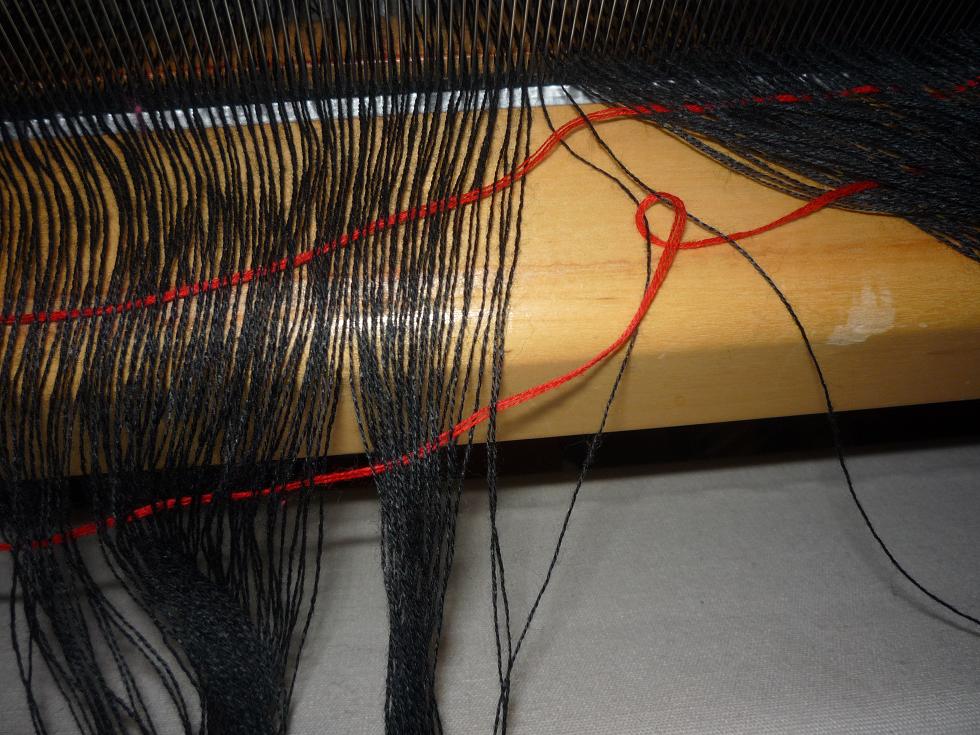 And in the end we have an organised bird nest.  Organised because every thread is in order on top of the last and still under control because the crosses are still in. 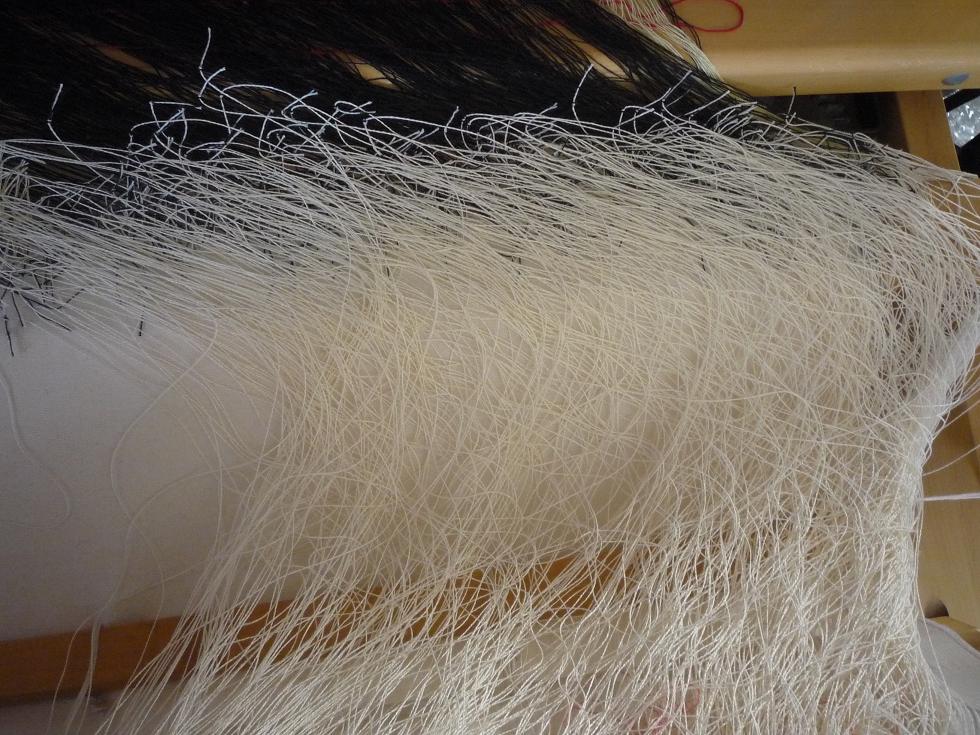 I then find the choke tie nearest the cross threads, usually 1.5 to 2 metres from the ends now knotted.  Starting with the last chain tied I gently pull and flap from the choke tie until the threads straighten.  I never comb the warp with comb or fingers. 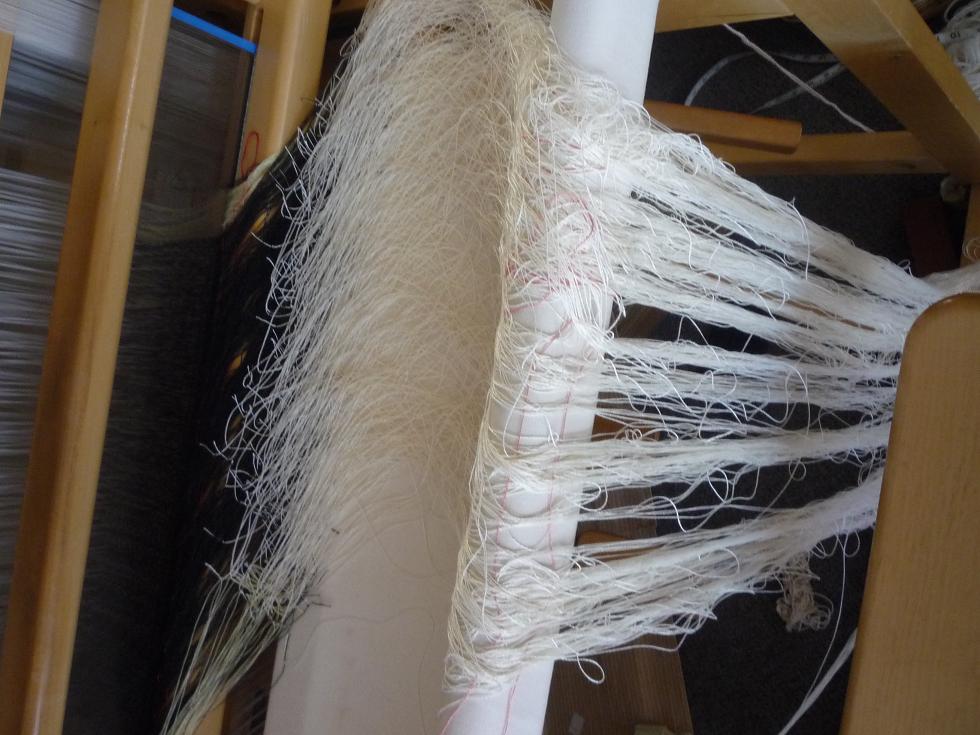 And here we are ready to ease the knots through the reed and heddles. 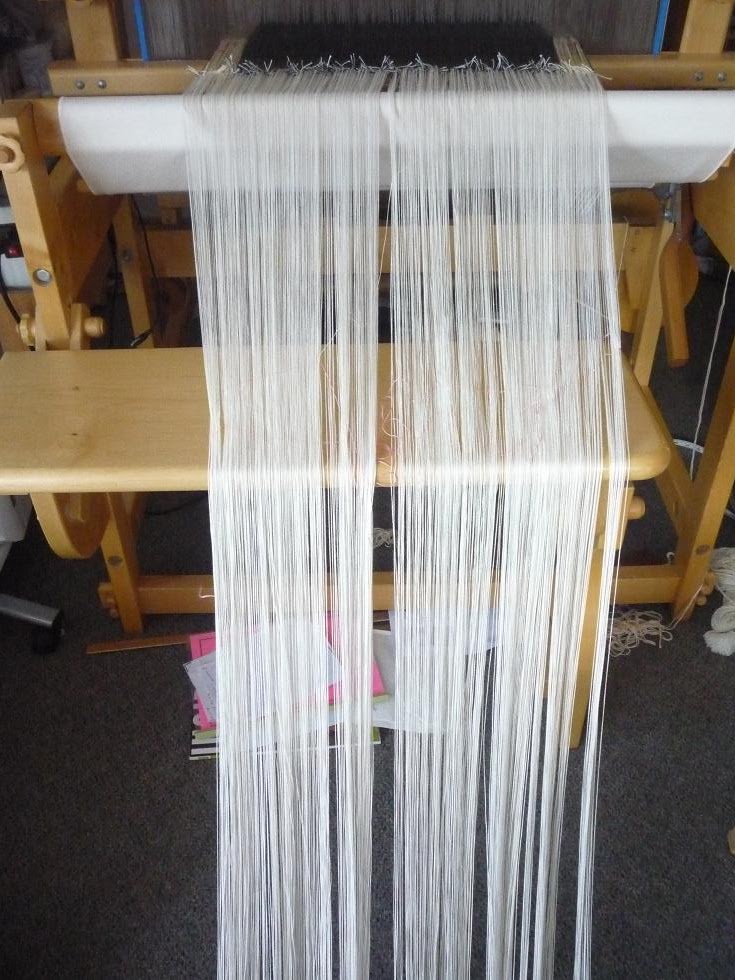 As I started to pull the threads on to the back beam I remembered reading this from Cally Booker and went looking for my dress stand and tripped over the warp reel on the way!  Bingo, the extra tension of moving over the rail and under the beam (which is pretty mobile) was enough to get the warp on without squeezing myself from back to front of loom and pulling. 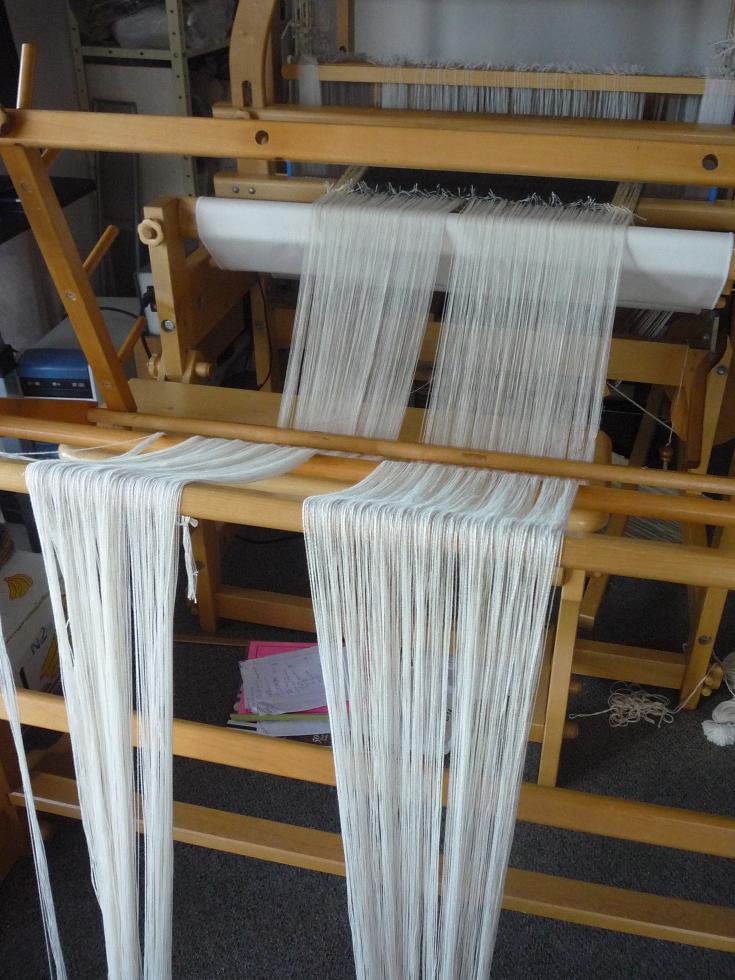 Can't resist the row of straight knots.  If the last cloth was cut off straight and all the knots are about the same size then they pretty much have to be straight.  This is the fourth warp I've tied on to this particular threading. 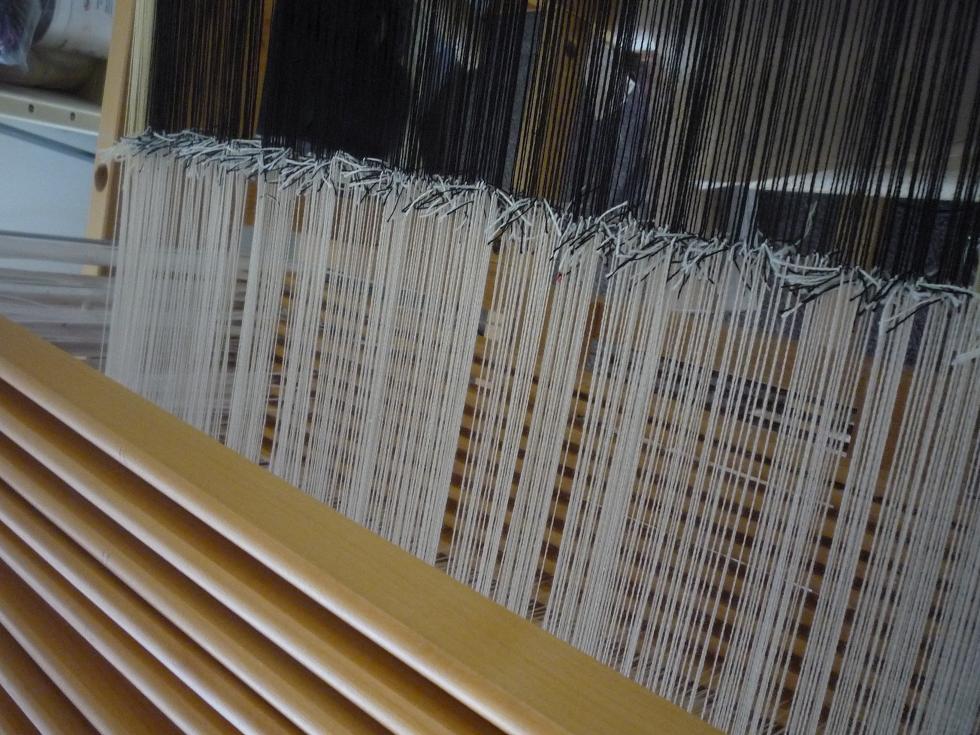 And weaving has begun. 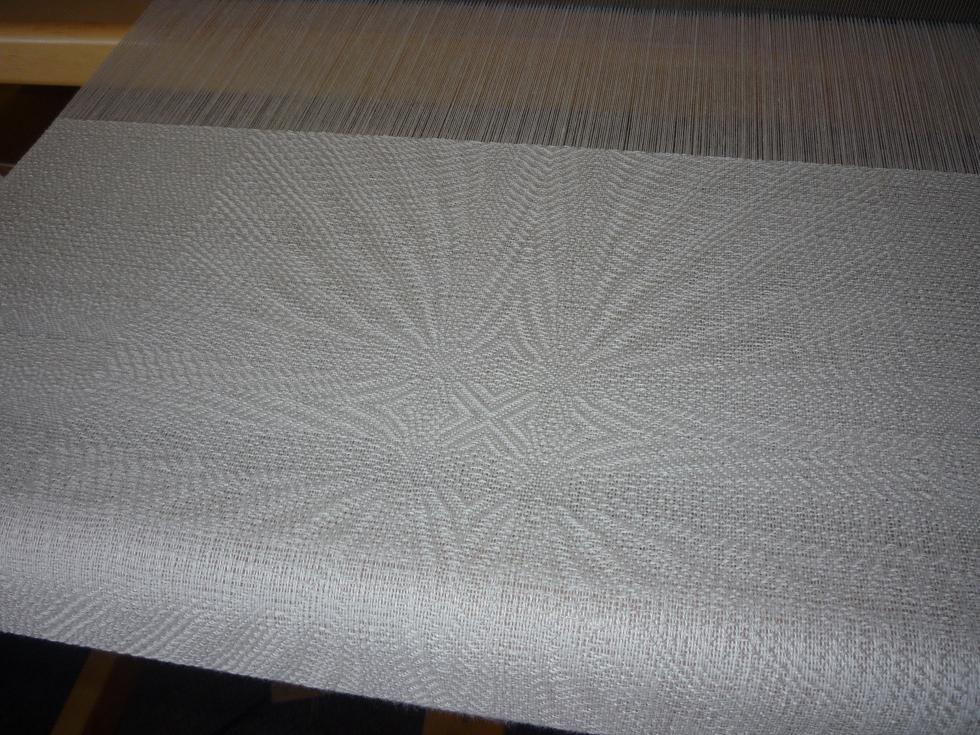 This is a wrap for a bride; my daughter's friend is marrying at the end of April so she may or may not need extra warmth.  The warp is bamboo and the weft is silk. 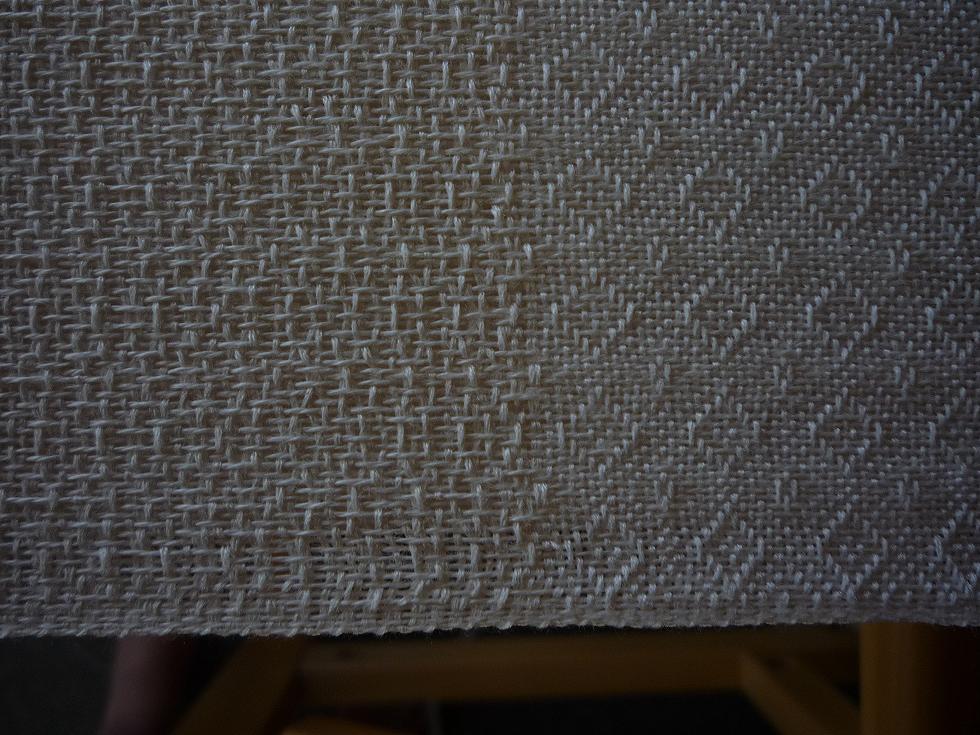 This pic is for Agnes who helped me get my selvedges straight.
Posted by Dianne at 8:08 PM